Justin Rose might be in the lead at the Farmers Insurance Open through three rounds, but that wasn’t the storyline that caught golf fans’ attention at Torrey Pines. Instead, it was the reconciliation of the Jordan Spieth–Patrick Reed bromance on the first tee on Saturday.

Paired up together for the third round, the two greeted each other warmly with a big hug and praised each other afterward. It was a moment that many golf fans had been waiting for.

When asked about the bro hug after their round, Spieth said that it was more sarcastic than anything else.

“I laughed. I think he did, too,” Spieth said. “It was more kind of sarcasm towards [the media]. That was kind of, just, we knew the cameras were on and we knew people were interested in that, so I just thought it would be kind of funny.” 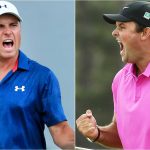 Despite their moment of forgiveness on Saturday, Reed said that the Ryder Cup has not come up between the two when they have chatted.

“Literally when we got off the plane it was old news and we all moved on from there, so not really,” Reed said. “I mean, it’s really nothing. Jordan and I, we’ve moved on. We’re now just out here trying to play some good golf and trying to feed off of each other as well as just trying to go out and shoot low numbers.”

On Saturday, it was Reed who had the better round than Spieth. Reed shot a 3-under 69, which included four birdies and a bogey. Meanwhile, Spieth shot an even-par 72 on the day. While the round consisted of three birdies and an eagle, Spieth also finished with two bogeys and a brutal triple-bogey at the 15th hole that killed his day.

Reed enters Sunday’s final round at 9-under, while Spieth remains at 7-under.

“Jordan and I are still really good friends,” Reed said. Who knows how long this detente in their recent frostiness will last, but Saturday sure was a good first step for the duo.