When you’re one of the biggest stars in golf like Jordan Spieth, you get asked the same questions over and over again, especially when something notably bad happens to you. Such is the case with Spieth and his late collapse at the 2016 Masters.

Ever since Spieth threw away a prime opportunity to win back-to-back green jackets by dunking two shots into Rae’s Creek on the 12th hole in the final round, he’s had to face questions about it. Two years and one major victory later, the questions kept coming Wednesday at the Fort Worth Invitational.

In his press conference, Spieth attempted to explain how his perspective has changed, especially when it comes to handling the dramatic highs and lows of life on Tour. He called the 2016 Masters the “low point in my golf career.”

“Even though it was still a tremendous week and still was a really good year in 2016, that kind of haunted me and all the questioning and everything. I let it tear me down a little bit. I kind of lost a little bit of my own freedom, thoughts on who I am as a person and as a golfer,” Spieth said about the aftermath following his loss at Augusta. He then went even further, saying, “I loathed going to the golf course for a while.”

But Spieth also says he’s learned a valuable lesson from that horrible experience, namely that he can’t allow his past play, good or bad, to affect his current state of mind on the course. 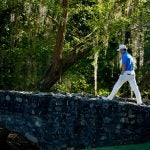 You may also like Masters 2016: How Jordan Spieth lost the Masters at Amen Corner

“I’ve just tried to really be selfish in the way that I think and focus on being as happy as I possibly can playing the game I love; not getting caught up in noise, good or bad. Because what I hear from the outside, the highs are too high from the outside and the lows are too low from the outside from my real experience of them. So trying to stay pretty neutral and just look at the big picture things and try and wake up every single day loving what I do.”

Spieth won the 2016 edition of the Fort Worth Invitational shortly after his Masters disaster, and he will begin his attempt at a second title Thursday at 9:06 a.m. ET.