Rickie Fowler leads, and other things you missed from Round 2 of the WMPO

The battle of the housemates continued at TPC Scottsdale on Friday, as Rickie Fowler and Justin Thomas are Nos. 1 and 2, respectively, on the leaderboard at the tournament’s halfway point.

Here’s everything you missed from Round 2 of the Waste Management Phoenix Open.

After co-leading the tournament with Justin Thomas and Harold Varner III on Thursday, Fowler dropped down the leaderboard early on, and was only one under par on the day through his first 11 holes. But, powered by a surge of five birdies in his final seven holes — including four in a row to finish his round — Fowler ended the day at the top of the leaderboard at six under par on the day and 13 under par overall — one shot clear of Justin Thomas, who is currently solo second at 12 under.

.@RickieFowler brought the noise at 16. ?

In one of the day’s most surprising developments, three-time Phoenix Open champion Phil Mickelson managed only one birdie and suffered five bogeys in Round 2 to end up four over par on the day. His overall score of one over par was two shots shy of the cut line, which means Phil won’t be around for the weekend in Scottsdale for the first time since 2015. 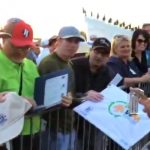 After posting two quietly solid rounds (66-67) Bubba Watson is in prime position to make a charge over the weekend. The 12-time Tour winner has finished runner-up at the WMPO twice (2014 and 2014). At nine under par through two rounds, he’s four shots behind Rickie Fowler’s lead. Hey, maybe he’s on to something with this new putting stroke!

Seven under par is the lowest round of the tournament thus far. Yesterday, Rickie Fowler, Justin Thomas and Harold Varner III posted the number, while today only two players managed it: Branden Grace and Trey Mullinax.

Interestingly, both Grace and Mullinax also shot 67 on Thursday, so they both moved eight spots up the leaderboard to T3 at 11 under par overall.