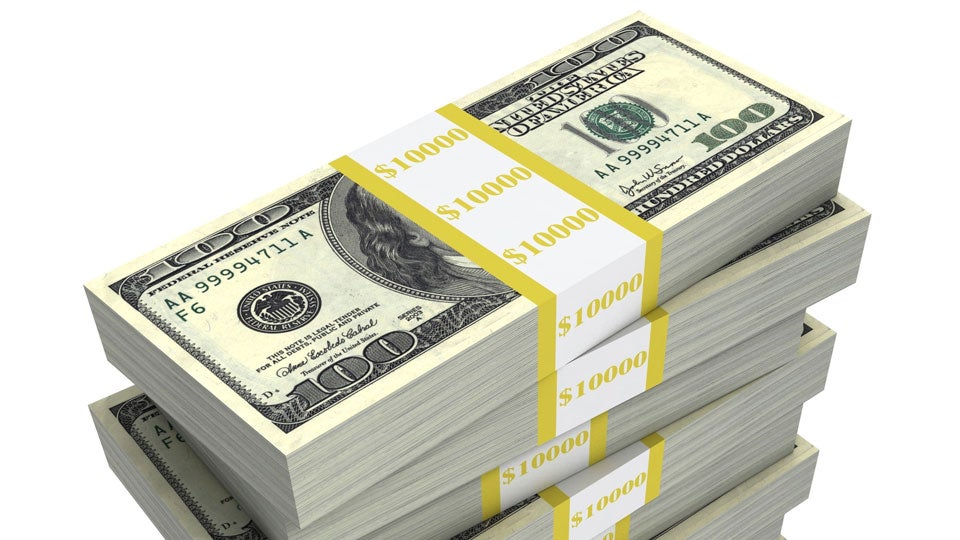 Finally, we have a New Year’s resolution we know you’ll keep. Treat yourself to a special golf experience in 2016, no matter how much you have to spend. From playing Pebble to lessons from Jordan Spieth’s coach, here are 15 great ways to invest your hard-earned golf dollars.

Bandon on a Budget
The ultimate U.S. buddies’ golf trip destination for a grand? Well, sort of. For that buy-in, you won’t be staying on property or hiring caddies, but you can still enjoy a superb Bandon experience. Ten Franklins will cover your fees for a round on all four courses over two days in the prime months of June through September, thanks to the $155 replay rate for golf-only day guests. For just another couple of hundred bucks per night via Airbnb, you and your foursome can bunk in a cozy coastal bungalow a few miles away. bandondunesgolf.com

Island Hopping
Your education as a golfer is incomplete until you’ve stared down golf’s ultimate gut check, the par-3 17th at the Stadium course at TPC Sawgrass in Ponte Vedra Beach, Fla. If your pulse doesn’t race at the prospect of dueling with Pete Dye’s original island green, ask a doctor to check your vitals. The rest of the course is no slouch either—it bursts with variety. To play here, you’ll need to stay on-site at the Sawgrass Marriott Golf Resort & Spa. In the prime time of March and April, the resort’s Stadium Golf Experience offers deluxe accommodations, breakfast and one round at the Stadium for $634-$654. Direct flights from NYC area airports to Jacksonville in March and April range from $250-$370, so expect to spend around $1,000 to conquer (or cower at) Sawgrass. Have a travel partner? A package for two runs $989-$1,009 in the spring and less at other times of year. marriott.com

Four Hours with Jordan Spieth’s Coach
Private lessons are a reliable path to game improvement— and game enjoyment—so invest in some enlightenment from one of golf’s hottest teachers, Cameron McCormick. Jordan Spieth’s lifelong coach lives in Dallas, and in early 2016 he’ll move just south of downtown to spanking-new Trinity Forest G.C., a slick Bill Coore/Ben Crenshaw design and the future home of the PGA Tour’s AT&T Byron Nelson. Not all swing-gurus-to-the-stars offer instruction to the masses, and certainly not at McCormick’s reasonable rate. He’ll work with you for $250 an hour, but book now, because he tells us the price of admission will likely rise soon. cameronmccormickgolf.com

Dream Round
If you’re a red-blooded American golfer, you must make a Pebble Beach pilgrimage at least once. For advance tee times, you’ll have to stay on property—a superb, if pricey, experience. (Packages start at $3,745.) If you stay elsewhere, you can call one day ahead and (maybe) get lucky. As is the case at the Old Course at St. Andrews, you’ll have a better shot making the tee sheet as a single—try during quieter times of year, such as January or over the July 4 holiday. Green fees are $495, plus $40 for a cart, but walk and take a caddie instead. It’s $80 per bag, plus a recommended average gratuity of $35-$55. You’ll have just enough left to play Spyglass Hill for $395. Or enjoy Spanish Bay for $270 and then celebrate at the ultimate 19th hole, the mahogany-lined Tap Room at the Lodge at Pebble Beach. pebblebeach.com

Watch an Open, Then Play an Open Course
Some call it the British Open, others the Open Championship. We call it a blast. This July it returns for the ninth time to rumpled, regal Royal Troon. The Open truly is open: You can stroll up to the gate and buy a ticket for any round for about 100 bucks. This leaves you a chunk of change to feast on Scotland’s golf-rich west coast. Start at the newly Trumpified Turnberry Ailsa course. You’ll pay about $390 during Open week to play the Watson-Nicklaus “Duel in the Sun” venue. Next, head to quirky Prestwick, site of 24 Opens and an all-you-can-play weekday rate of $317. Last up: one of Scotland’s great unheralded tracks, Western Gailes. Bring your appetite: The $209 green fee includes a two-course lunch. theopen.com

Two Words: The. Masters.
Dreaming about strolling Augusta National’s verdant grounds is a tradition unlike any other. It’s time to make it a reality. Brokers sell Monday practice-round tickets for under $400. For the four tourney rounds, StubHub currently has a per-badge price of $4,849, while TicketCity has six badges from $4,600/per. Lock in that price and you’ll have enough left over for a 12-ounce Prime Rib ($21.95) at TBonz (the best people-watching eatery in town) and a round of golf. No, not at Augusta—at Forest Hills Golf Club, a 1926 Donald Ross design, where $140 buys you golf, range balls and lunch. Can we get an Amen?

Two More Words: Ryder. Cup.
Minnesota might not top your bucket list, but in 2016, it should. Hazeltine National in suburban Minneapolis will host the Ryder Cup in late September. Let Premier Golf, the PGA of America’s exclusive distributor of official Ryder Cup packages, do your heavy lifting. For $4,895 (or $3,595 per person, double occupancy), you’ll get four nights at the Hyatt Regency Minneapolis, along with breakfast, a Ryder Cup season ticket (Thursday through Sunday), round-trip transport, welcome reception and a Ryder Cup gift. (Which we assume isn’t a hug from Ian Poulter.) One potential upgrade includes the option to add an extension that lets you tee it up at Ryder Cup venues such as Kiawah Island, Pinehurst and Whistling Straits. premiergolf.com

Get Pampered Like a Pro
Elite Tour pros enjoy state-of-the-art clubfitting and luxurious lodging. Get the same treatment with the Fit Fore VIPs package at the St. Regis Monarch Beach in SoCal (starting at $1,630). You’ll be chauffeured to the headquarters of Titleist, TaylorMade or Callaway for a custom fitting using the same technology the pros use. Also included is a sweet suite for two nights at the St. Regis, unlimited golf at its RTJ Jr. design, and club rentals while your shiny new sticks are being built. A set of clubs for you and your spouse, meals and airfare from most cities will total about $5,000. stregismb.com

Get Fit Like a Pro
If you’re serious about lowering your scores by boosting your athleticism, pack your workout gear—and your sticks—for Scottsdale. The Exos Golf Experience Powered by Troon is tailored to help you achieve peak performance. (Ask Graham DeLaet, Ricky Barnes and James Hahn, who are among the Tour pros who train there.) Over three days, you’ll be tested and counseled on nutrition, mindset, movement and recovery. Then you’ll hit the TrackMan at acclaimed Troon North for high-tech swing analysis under the tutelage of Top 100 instructor Tim Mahoney. The cost: $2,995. Add airfare from most major cities and three nights’ lodging at the Four Seasons Scottsdale at Troon North and you’ll come in right on budget. pages.teamexos.com/golf

The Ultimate Vegas Weekend
Start at the Butch Harmon School of Golf at Rio Secco GC outside Vegas. The two-day package is $3,900 and includes three nights at Caesars Palace, two days of tutelage with Butch and his staff pros, a nine-hole playing lesson at Rio Secco with staff pros, lunch each day with Butch and his team, plus transportation. Test your tuned-up game with a round at Rio Secco ($109-$199) and another at Caesars’ premier course, Cascata ($275-$395). With airfare, you’re looking at about five grand all in, but hey—one good night at the tables and you’ll win it right back. butchharmon.com

Heli-Golf in Ireland
Who needs the stress of driving on Ireland’s winding country roads when you can fly over them? Your 10-day PerryGolf adventure starts in Belfast. The road-trip portion features Royal Portrush and Royal County Down, both ranked in the world’s top 15, followed by Portmarnock in Dublin. Two days later, you’ll climb aboard a helicopter and travel to Old Head, then to Trump International in Doonbeg. Day 8 is a showstopper, with a morning chopper ride to Tralee, an afternoon round at Ballybunion, then a flight back to Doonbeg. Cap it off with a round at charming Lahinch. While traveling Tiger-style will run you $10,000, at least you won’t get charged for dinging up a rental car. perrygolf.com

Something Old, Something New
Tee times at the Old Course at St. Andrews are one of golf’s hottest commodities. Guarantee one with a PerryGolf tour. The Classic Scotland package ($6,995 per golfer) kicks off at two fabled Open venues, Royal Troon and newly refurbished Turnberry. (Note: Troon will be off-limits when it hosts the Open in mid-July, and Turnberry’s Ailsa course doesn’t reopen until June.) Next up: rugged Carnoustie, followed by the crown jewel, the Old Course, with killer Kingsbarns as your kicker. To arrive refreshed, treat yourself to business-class airfare (NYC to Glasgow) for about $3,100. perrygolf.com

Chips Ahoy!
For golf-loving couples, a French and Italian Riviera Kalos Golf Cruise on the Sea Cloud II is the ultimate indulgence. Pair sightseeing in Nice, Monte Carlo and St. Tropez with golf in Cannes, Corsica, Sardinia and more. Of course, life on this 47-cabin floating country club is so kick-back great that you may never go ashore—or home! Rates start at $8,265 per person. With economy airfare from most major U.S. cities, you’re looking at 10 grand all in. A three-day extension to Lake Como starts at $2,895 per person. (Give our best to the Clooneys.) kalosgolf.com

“Game” Time in South Africa
Watch the Big Three in action. No, not Jack, Arnie and Gary…lions, elephants and giraffes! This exotic 13-day PerryGolf excursion features top-ranked tracks such as Fancourt (Links), site of the 2003 Presidents Cup, cliff-top Pinnacle Point and seaside Humewood. You’ll tour wineries, cruise a harbor to see Cape fur seals, and conclude the trip with a safari at Shamwari Game Reserve, featuring morning and evening game drives, interpretive bush walks and dinners under the stars. The cost for a golfer is $5,350. Add in meals, tour options and airfare and you’ll ring up close to $10,000. perrygolf.com

Witness Golf’s Return to the Olympic Games
As golf prepares for its first appearance in the Summer Olympics in more than a century—what, you don’t remember George Lyon’s 1904 gold-medal triumph?—ticket demand has skyrocketed for the Rio games. Day passes, ranging from $25 for Rounds 1 through 3 to $51 for the Medal rounds, were distributed by lottery and went fast. But there’s hope. CoSport, the exclusive U.S. distributor of Olympics tickets, is offering packages with three-star hotel lodging in Flamengo, Ipanema and Copacabana and tickets for the first three men’s rounds or rounds 3 and 4 of the women’s event. At press time, men’s prices started at $8,140.50, women’s at $6,173.50. With airfare, meals and sightseeing you’re looking at 10 large—but you’ll have a front-row seat to history. cosport.com