The year of 2019 was one to remember, both for the game we all love, and for the members of the GOLF.com staff. Here’s a look back at our favorite photos from the year, as captured by our phones. 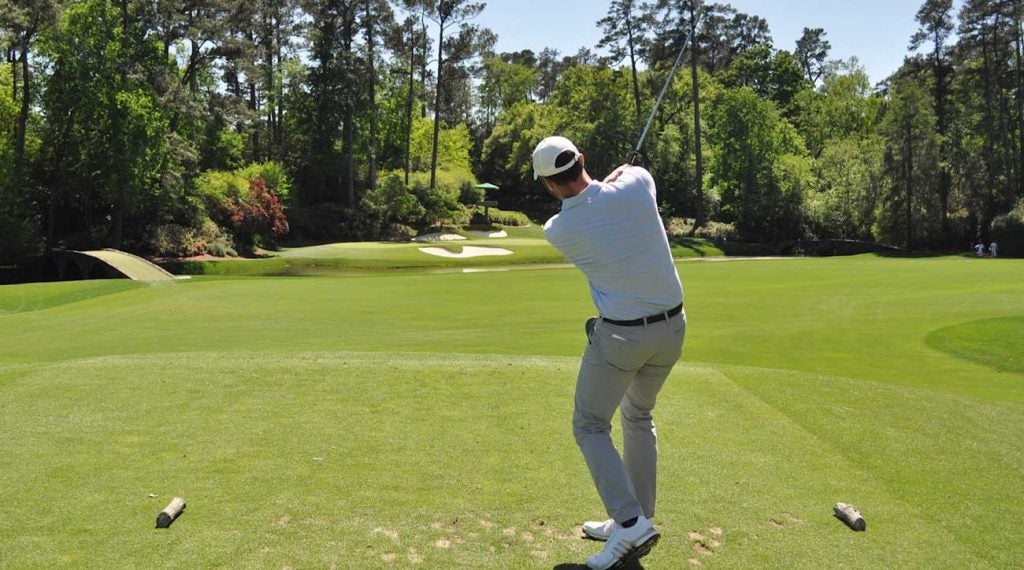 This is me on the 12th at Augusta National — the day after Tiger’s historic Masters win. Nothing else needs to be said. But since I was tasked with offering up a few sentences on the photo, I’ll just add I went even-par through Amen Corner and came within a single revolution of making birdie on this stunner. The whole experience still feels like a dream.
—Jonathan Wall 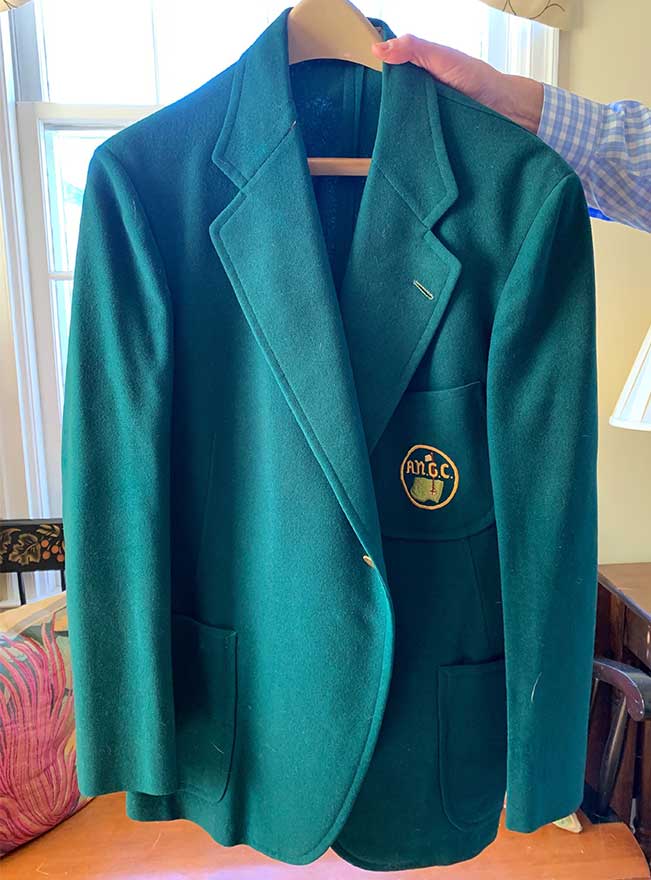 For some reason, I feel like I earned this one. After tracking court documents for a full year, I was able to finally meet with the owner of a 1930s-era Augusta National green jacket. Whatever you think this thing weighs, it’s heavier. However scratchy you think the wool might be, it’s scratchier. It was a treat to see this artifact up close. —Sean Zak

Before working the GOLF Top 100 Teachers Summit at Pinehurst in November, I was able to play a little golf with my dad. We had never done a trip dedicated strictly to golf before, usually, it’s a secondary thought we tack on while seeing the Mets at Spring Training. While it wasn’t exactly southern hospitality in terms of the weather, as temperatures hovered in the 40s, it was truly a great experience to soak in one of the great golf resorts in the world for the first time with the man who taught me the game. Sharing drinks with Big Tim at The Cradle’s mobile bar was the epitome of the Life of Reilly. —Tim Reilly 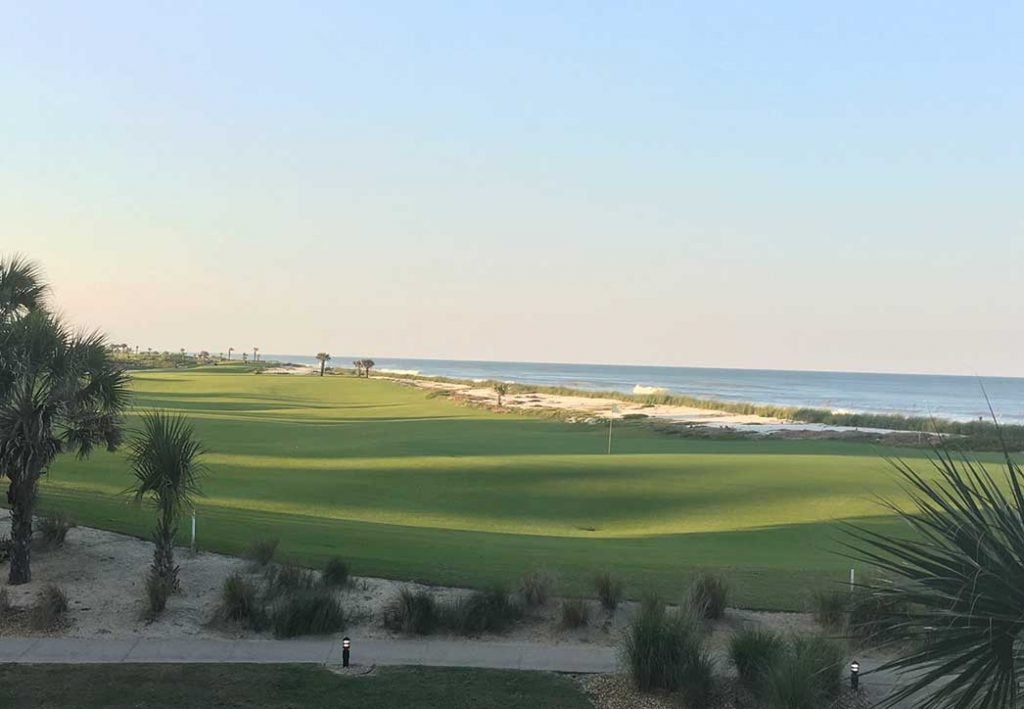 This is more than just a great finishing hole at a dynamite resort. In March we took our first legit family vacation since our daughter was born, heading south to Hammock Beach Resort in Palm Coast, Fla. My daughter loved the pool and beach, my wife got to do the whole spa thing and I got to play golf here, on the challenging and watery Ocean Course. The par-4 18th that’s (literally) along the beach was a great way to finish. This golf course and resort will forever serve as a reminder that our family vacations will never be the same. Big pools and crazy waterslides are starting to become just as important as the golf. —Josh Berhow

First round as a married couple was at Kahuku golf course in northwest Oahu. We paid $33, rented two crappy sets of clubs and had a blast playing this hilariously quirky and utterly beautiful 2,699 yard, par 35, 9-hole muni. There's a graveyard to the right of the 2nd green, a 30ft ramp in the middle of the 3rd green, and you tee off mats on the 110 yard 4th hole that drops down more than 150 feet. There are porta potties lurking in clusters palm trees, wild chickens roam the course, and ocean views flank six of the nine holes. One of a kind, and so much fun.

2019 was a big year for me. I got married to the love of my life in January. It was a small and beautiful snow-covered ceremony, and few days later we were off to Hawaii. My wife is a new golfer, so we decided to take the opportunity to play our first round of golf together. We drove up to the north shore of Oahu to Kahuku Golf Course: A delightfully quirky 9-hole muni that has a graveyard to the right of the 2nd green, a 30ft ramp in the middle of the 3rd green, and you tee off mats on the 110 yard 4th hole that drops down more than 150 feet. There are porta-potties lurking in clusters in the palm trees, wild chickens roam the course, and ocean views flank six of the nine holes. There’s not a course in the world I would’ve rather picked for our first round of golf as husband and wife. —Luke Kerr-Dineen 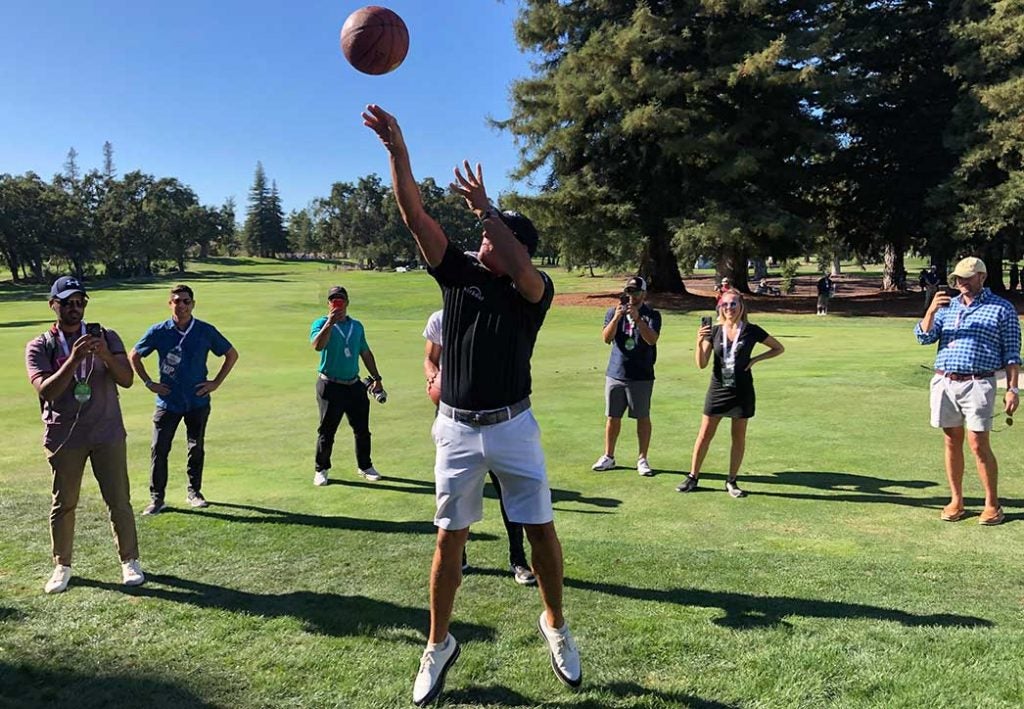 At the Wednesday pro am in advance of the Safeway open, the marquee pairing featured five-time major champion Phil Mickelson with three-time NBA champion Steph Curry. Given the relaxed setting, you knew at some point it was going to happen. And on the 17th hole, it finally did. Someone busted out a basketball and pinned a hoop high on a grandstand. An impromptu game of horse broke out. As crossover athletes go, Curry had already proved himself. As for Phil’s multi-sport talents, well, check out the form below. I’ll let you be the judge. —Josh Sens

I’m from Long Island, but truthfully, the PGA Championship at Bethpage Black — my home course — was a homecoming in a few ways. Four days prior to this photo, I was donning a cap and gown, celebrating my graduation from Syracuse University. After the big day, three of my best friends from school (Tim Leonard, Jonathon Hoppe and Connor Federico) came down to the Island and stayed with me and my family for the PGA. After the insanity of graduation, I’ll always remember those few days of laughs with lifelong friends. Even with the schedule change, this year’s PGA Championship proved to be “Glory’s Last Shot” for someone after all: me. —James Colgan 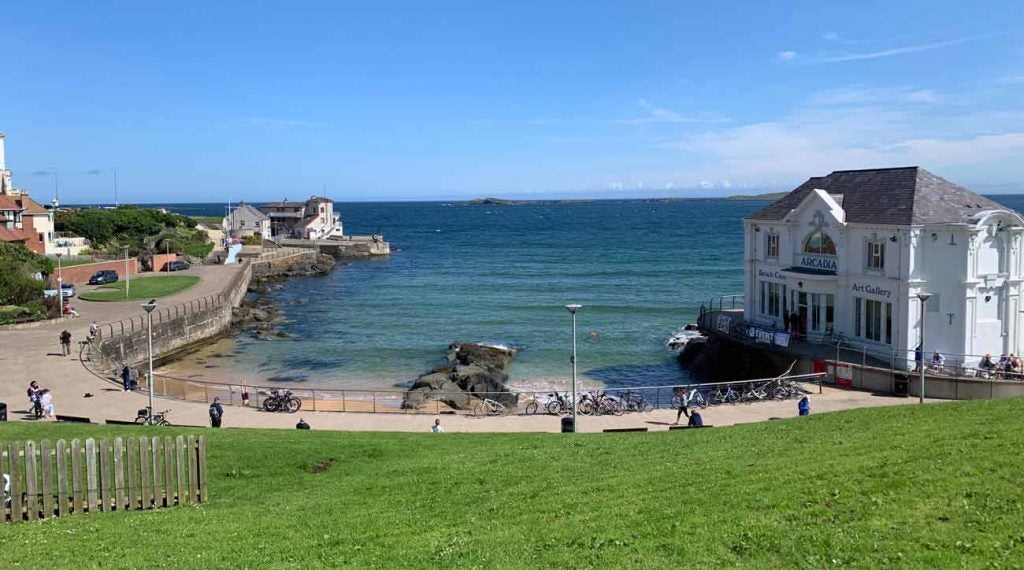 For years, I have listened to my colleagues extol the virtues of the Open Championship, and after 12 years at GOLF, it was the one major I had yet to attend. I was thrilled to make it across the pond for this year’s thrilling edition at Royal Portrush in Northern Ireland, but Shane Lowry’s heroics aside, one of my favorite memories of the week turned out to be the daily 20-minute walk to the course. Major-week commutes are usually dominated by lengthy shuttles and security lines. But at Portrush, the scenic walk to the course was an enjoyable and refreshing way to start each day. This photo was taken on Saturday morning of Open week, during a fleeting moment of brilliant sunshine. Had I taken the photo from a slightly different angle, you would be able to see the course in the distance on the right side. As it turns out, my colleagues were absolutely right. It’s the little things that make the charm of a week at the Open truly second to none. —Jessica Marksbury 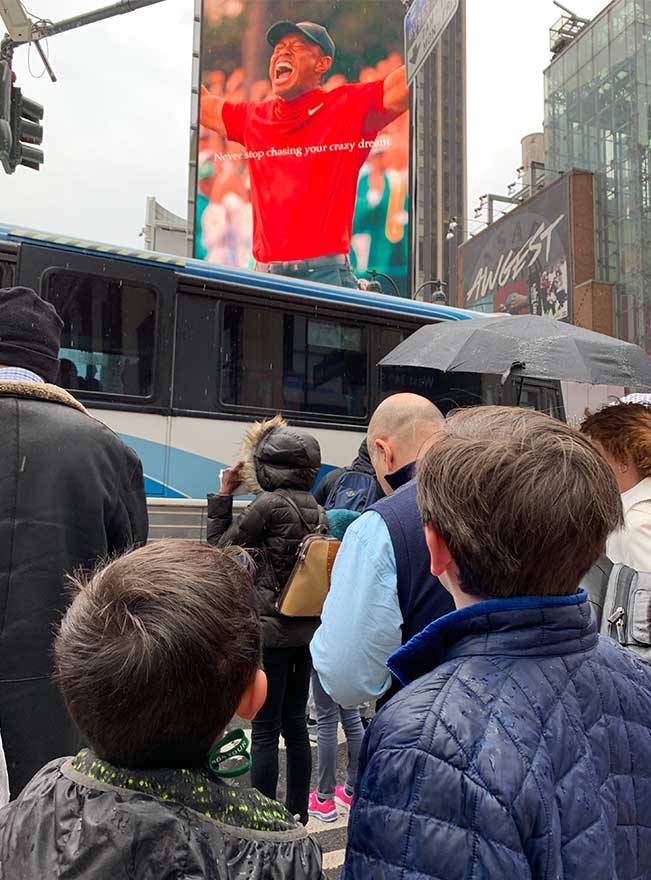 It’s clichéd to say Tiger’s Masters win was surreal, but, really, is there a better word for it? Even all these months later, it’s still difficult to wrap one’s head around what the guy achieved, battling back from the chip yips, the mug shot, the screws in his back. At the end of 2017, he was ranked 1,199th in the world, a broken-down legend, an afterthought. Sixteen months later, he slipped on the green jacket. A few weeks after the Masters, two of my kids came to work with me. At the end of the day, we walked from GOLF’s midtown office, through the canyons of midtown, back toward Penn Station. As we neared our destination, there he was. Red shirt, arms raised, exulting. The significance of Tiger’s win was largely lost on my boys, but they were still clearly captivated by the ad. It was hard not to be. Surreal. —Alan Bastable