Gear talk: Charles Howell III discusses his switch to Titleist and what makes his clubs unique 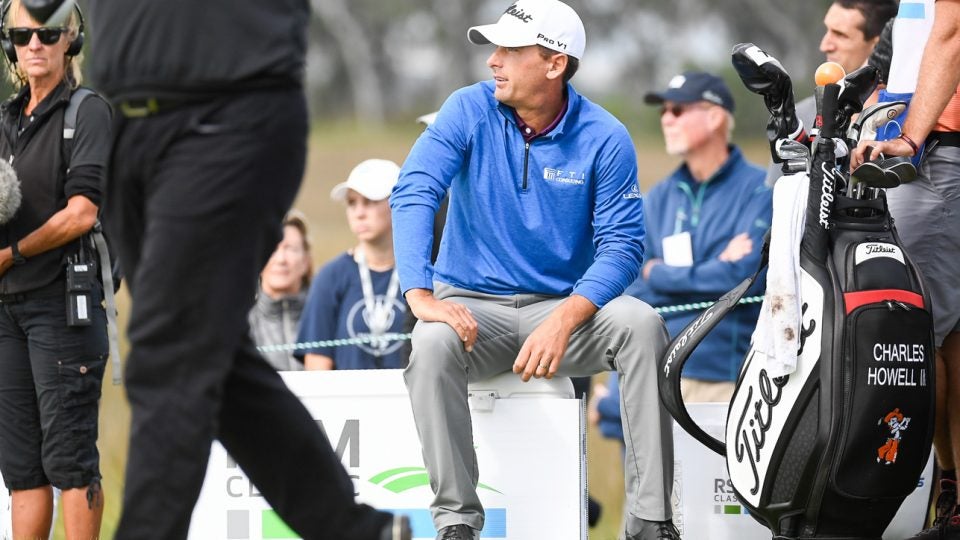 Most professional golfers will tell you it takes, at the very least, several months to get acclimated to new equipment. Apparently, Charles Howell III missed the memo. Following a three-year run with PXG, Howell moved to Titleist at the beginning of the 2018-19 PGA Tour season and logged the second win of his career in his fourth start with new gear, including a 2019 Pro V1 prototype golf ball that he played for the first time at Sea Island.

The victory was the culmination of hours of hard work on the range with Titleist Tour reps in the run-up to the CIMB Classic — his first event of the new season. Just days after winning the RSM Classic, Howell spoke to GOLF.com about switching to Titleist, the arduous testing process to build his current setup and why his 7-year-old son knows more about the Pro V1 than he does.

On the decision behind switching to Titleist equipment:

CHARLES HOWELL III: The one thing I always observed was that when a new golf ball came out, [Titleist Golf Ball Representative Fordie Pitts] always came out on Tour and told us what it did. We’d verify it did exactly that and then put the ball in play. There was a lot of trust in the process. I don’t think I’ve ever heard a player question what the ball was doing. So I think it was that level of trust I’d built with the team over there with the ball, plus the years I was free on the driver contract and used a Titleist driver, that made me strongly consider them when I was looking around.

With this being what I’d consider to be the latter part of my career, and with the way the game is changing, I knew that the driver and fairway woods were going to be the most important part for me. I obviously needed something I could hit far, but I didn’t want to sacrifice accuracy along the way. I’m never going to hit it as far as Cameron Champ, who I played with at Sea Island, but I need to maximize what I have, in terms of distance and accuracy. I felt like the combination of the driver, fairway and ball gave me the best opportunity to win again.

On the driver testing process:

HOWELL III: I wore [Titleist Tour rep] J.J. [Van Wezenbeeck] out, there’s no question about it. Through the roughly 12 or so different heads we tested — equal parts TS2 and TS3 — right before I got on the airplane to fly to Malaysia, I left with a TS2 and TS3 that I loved. I’ve never really seen a company where multiple model heads could have gone in my bag right away. I ultimately settled on the TS3, but I honestly could have flipped a coin to make that decision. The one thing I’ve noticed so far is that my driving has been much more stable. My ball speed has increased for sure, but the overall dispersion for the drives I’ve hit has been much more stable. For me, that’s been extremely important.

As far as the process is concerned, we started with a standard TS2 and TS3 with my usual shaft, and the first thing I did was take swings with it in every single position along the adapter — even in places where I know I’m not going to be playing the driver. Doing that allows me to see what the driver does and build trust in the head. So I can throw it in one of the settings and verify it actually does what it’s supposed to do.

LET AN EXPERT DETERMINE THE PERFECT CUSTOM CLUBS FOR YOUR GAME

Once I find a setting or two that’s close, that’s when I’ll start hitting a lot of balls with TrackMan to dial-in the numbers. Once we get through that part of the process, the more arduous part is then bringing it on the golf course and playing with, say, other Tour players at home or members at the local club. You’re testing the driver with one shot, one ball to see what happens. It’s the most important step before you take it to a tournament setting. I love practicing and the testing process, but I also recognize the range isn’t a game situation. You have to be able to translate what you’re seeing on the range to those moments on Sunday where you need to execute a certain shot and have to trust your equipment is going to do exactly what you want.

On his love for testing equipment:

HOWELL III: I probably enjoy it too much. The challenge for me is to go through the process and do whatever I feel like I need to do to get it right until there’s a compelling reason to change it. It’s a fine line we all walk in an attempt to find an advantage. The margins on the PGA Tour are a razor’s edge. So if there’s something new that comes out, I’ll likely want to try it to see if it’s a better fit.

The one part of the equipment that does change pertains to how your swing changes over time. In an ideal world, your swing improves as the year goes on, so the equipment may need to be changed. That right there shows part of the importance of the fitting process, but also the communication I’ll have with Titleist where I’ll say, ‘Okay, here’s what I’m trying to do. Let’s keep monitoring these things because the equipment may need to be changed.’ Throughout history, you’ve seen multiple players change equipment in that manner. Just because a setup works for you today, that doesn’t mean there isn’t something better out there for down the road.

On the most important part of the testing process:

HOWELL III: It’s think it’s your ultimate trust in how far your ball is going on a windy day on the course. Fortunately for me, we get wind this time of year in Florida, so it was actually a really good time to test equipment. I was able to get on the course in the wind and test the golf ball, irons, etc. We can sit on the range with a launch monitor and figure out a full 6-iron goes X yards, but what you really need to figure out is what that 6-iron will do in a 30 mile per hour wind where you might need to take a little bit off to hit a certain number. I need to figure out what that number is and if this particular club is the one for that scenario. For me, that’s the most important part of the testing process; it tells me a lot about if a club is really good.

On how he built his mixed Titleist 718 iron setup:

HOWELL III: I grew up always playing a cavity-back club. I never played blades. I still remember my days playing at Oklahoma State [University] when coach [Mike] Holder would pound in our heads that we weren’t good enough to play blades, so I’ve learned that I need all the help I can get when it comes to the irons. A personal preference for me is that I don’t like to see a lot of offset, so the great thing for me was I had the opportunity to go through all of the Titleist 718 models and figure out the best breaks in offset between the sets that best fit my eye. The AP2 5, 6 and 7 really fit my eye, while the 8, 9 and pitching wedge in the CB were the best option because they still have some forgiveness but not a lot of offset.

That’s the one thing I think amateurs can learn from my setup. Your equipment is ultimately supposed to help you; you’re not supposed to spend your time on the course fighting your equipment. If you take the time to get fit, sometimes you’ll wind up with two or three models in the bag that fit your game.

On why he chose to switch from Titleist Pro V1x to Pro V1:

HOWELL III: I loved everything about the Pro V1x ball off the driver and fairway woods, but when I started working on the ’19 version, Fordie Pitts and the guys told me I might want to consider trying the Pro V1. During testing, I was just as long with the Pro V1 as I was with the previous Pro V1x, but the benefit I found in the V1 was that it was softer around the greens for me. Feel is extremely player-dependent, but for me, not losing any ball speed and getting that responsiveness with the scoring clubs was like getting the best of both worlds. It was a no-brainer. Plus, the ball was cutting through crosswinds like it was no big deal. Anytime you don’t have to worry about the ball ballooning in those situations, that’s a good thing.

On his 7-year-old son’s recent visit to Titleist’s Ball Plant 3:

HOWELL III: They flew up for the tournament in Boston and Titleist was nice enough to give them a tour of Ball Plant 3 and, my gosh, did my son have the time of his life. I’m quite sure he wore that tour guide out with a million different questions. He’s reminded me multiple times that he’s been to Ball Plant 3 and I haven’t, and that he actually saw the new Pro V1 before I did. It’s pretty bad when your 7-year-old is more knowledgeable than you are when it comes to the ball.

On his son’s admiration for Justin Thomas:

HOWELL III: Dude, he thinks Justin Thomas hung the moon. I don’t even register on the list. He knows JT’s entire bag setup, follows him on the PGA Tour app. When we’re both playing, I don’t even have to ask him who he’s tracking. That’s his favorite player without a doubt.

On the club that impressed him the most during testing:

HOWELL III: The TS3 driver for sure. It happened when we flipped the SureFit CG to a slightly draw biased setting. It immediately knocked spin off — roughly 300 RPMs across the board — and I was able to draw it just a touch. That second right there was the “holy cow moment” where I knew I’d found my driver and the perfect setting. It impressed me what a difference that setting made.

On what makes his club specs so unique:

HOWELL III: I play my irons a little bit longer in length — a half-inch long — for posture and golf swing reasons. Other players my height would normally have shorter irons than my current setup. I’ve had guys pick up my set and many are surprised because they are expecting something around standard length.