The PGA Tour continues its Florida swing this week with the Arnold Palmer Invitational at the Championship Course at Bay Hill, located just outside of Orlando. Here are four things you need to know about this week’s course, which was rated as one of the 15 most difficult tracks on Tour last year.

The origin: The Bay Hill Championship Course was designed by course architect Dick Wilson and built by Bob Simmons in 1961. It earned its name from the bay that borders the northwest part of the course and the hills that surround the numerous lakes and wetlands. Then, in 1965, Arnold Palmer’s infatuation with the course began when he played and won on the track for the first time at a charity exhibition event. Ten years later, he bought the club and served as its owner until his death in 2016. Now, the club is run by his son-in-law. In 2009, Palmer oversaw a vast redesign of the Championship Course. This week, Bay Hill will be celebrating 40 years of hosting the annual PGA Tour event that holds Arnie’s name.

The design: The 18-hole, par-72 Championship Course tips out at 7,381 yards. The course is described as being straight-forward with no hidden shots, and the putting surfaces are elevated to improve visibility. The track features lots of bunkers and water hazards that come about from the course’s numerous lakes. Bay Hill is also the first course to ever use Tifway Bermuda grass for its fairways and greens. During the renovation led by Palmer in 2009, all 18 greens were redesigned, the bunkers were reworked, and major changes were made to four holes that lengthened the total yardage of the course by upping it from a par 71 to a par 72. 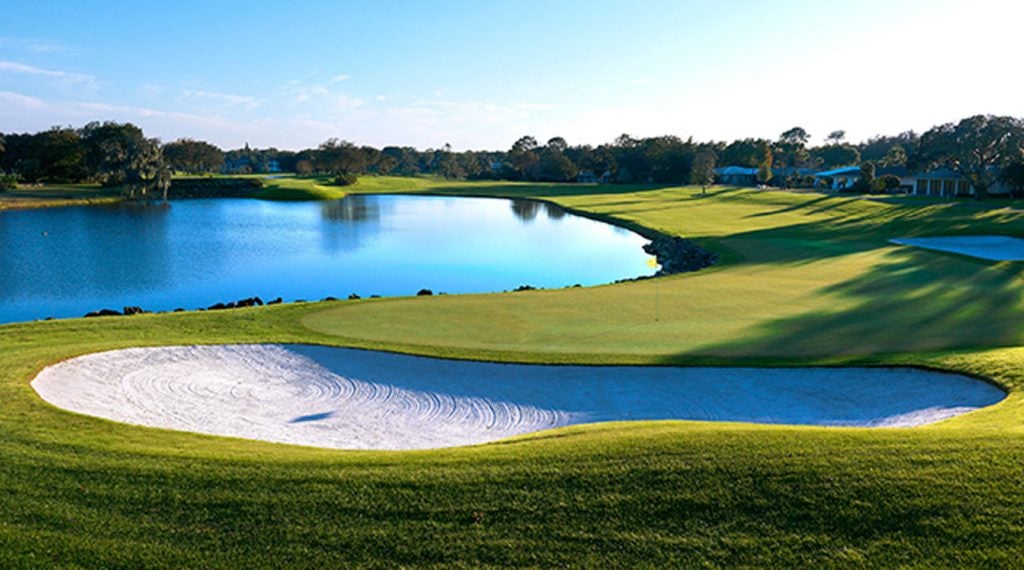 Bay Hill has played host to the Arnold Palmer Invitational since 1979.
Evan Schiller

Most difficult hole: The par-3 231-yard 2nd hole was rated as one of the 15 most difficult par-3s on the PGA Tour last year. It’s the second-longest par-3 on the course and has the highest scoring average of any par-3 on the course (3.254). The hole, which plays slightly downhill, saw its green rotated 30 degrees clockwise during the 2009 renovation. With the green now rotated and the back tee expanded, this hole became even longer and more demanding. The safe play here is to hit the right side of the green, which slopes right to left. If you completely miss the green it’s a difficult up and down. A par here isn’t a bad score; there’s a reason it consists of the highest percentage of bogeys at Bay Hill.

Easiest hole: The par-5 511-yard 16th hole was rated as one of the 10 easiest par-5s on Tour in 2018. It has the lowest average score of any of the par-5s on the course (4.354). A tee shot here has to avoid the bunker and trees to the right of the fairway. Some of the best drivers on Tour should be able to reach the green in two, however, one of the course’s many water hazards happens to be located in front of the green. Therefore, a miss-hit could find its way into the water. The green is surrounded by bunkers in front, behind, and to the right. This hole surrenders the highest percentage of birdies on the course, but the key to making a 4? A strong approach shot.