For Tiger Woods, and the author frantically attempting to watch him, Saturday at Torrey Pines was an excellent adventure

On Saturday, Tiger Woods played in the third round of a full-field PGA Tour event for the first time since Aug. 22, 2015. Tiger, back in action. You’re tingling — aren’t you?

His tee time was 10:10 a.m., Torrey Pines time — 1:10 p.m. on the East Coast — and he played with Sung Kang of Korea and Brandt Snedeker of the 2012 Ryder Cup team, if you need a reminder of the last time they played on the same team. Sneds played for Woods, an assistant captain, on the ’16 team. Woods has done a pretty good job keeping his name in circulation during his long absence from true competitive golf. Of course we have aided and abetted him. We the people: reporters, bloggers, all your favorite Golf Channel personalities, the men and women behind tigerwoods.com. I’ve had plenty of company.

At five past the hour, I was at lying in wait, standing at attention in front of the wall-unit flat-screen at the PGA Tour Shop at the West Palm Beach International Airport. Naturally, it was set to Golf Channel, as the CBS broadcast of the year’s first major — the Farmers Insurance Open — had not yet begun. The sound was off but the closed captioning was abuzz, with Brandel Chamblee and Frank Nobilo offering trenchant analysis of the first two rounds in the Farmers Insurance Open, in which Woods (we all know) shot one under par to make the cut on the number.

Yes, good, thank you. But what about the here-and-now? What was Tiger Woods doing at that moment?

Of all the days to have a nonrefundable airfare!

I was on a 2:21 p.m. flight, heading home after the bacchanalia that is the PGA Merchandise Show, followed by a golf-‘n-baseball visit with a friend in Vero Beach. The clamoring to see the action at PGA Tour Shop at PBI was intense. OK, I overstate. I actually had the screen to myself. But had you had been on AA1869, nonstop to Philadelphia, you surely would have been at the screen, or some nearby one, too.

My personal lunch bell whistled. Rooney’s Pub, across a broad airport corridor, had its various TVs set to either CNN or college basketball. I asked Chris, the restaurant host, if Golf Channel could be located on one of them. He obliged cheerfully and with considerable effort.

“You know why this event is significant, don’t you?” I asked.

“Who is the Beyoncé of golf?” I asked.

He searched his memory for a name but could not come up with one. Three other colleagues could not, either. A fourth was called in. She could.

“Tiger Woods!” Chris repeated when the answer was revealed. “I’ve heard of him.” Golf Channel showed what looked like a lost-in-mechanics Tiger Woods dead pull off the 10th tee. Left of left. By the time my sandwich arrived, Woods had already made a Seve-like scrambling par on the par-4 10th (his first) and a missed-green bogey on the par-3 11th, from well left of the green.

I got through security and checked my phone for updated scoring information. (Those tense minutes when we were apart!) At Nick’s Tomato Pie, a mainstay of the PBI B terminal, on a TV above the top-shelf liquor there, Woods made a birdie on the par-4 12th. You would not call it an easy one. Wayward drive, far right. But as the saying goes, the scorecard shows no pictures.

I was the last to board the flight, or nearly so. I wondered how the captain would handle scoring updates. You’ve likely had similar experiences. Some captains, at 30,000 feet while an important sporting event is unfolding on terra firma, will give you scores by the quarter or the inning or what have you. But I have also had captains who offer real-time nothing, in deference to those who want to get to their home device and watch an all-over-but-the-shouting event “live,” through the magic of TiVo. I waited eagerly for the AA1869 preflight announcements. Nothing! We were in the air by 2:21 p.m.

The flight had Gogo inflight service. PTL! I clicked my way to the PGATOUR.com leaderboard, tapped the WATCH LIVE NOW icon and was greeted with this bit of nastiness: “We’re having trouble finding that site.” Oh, please. I thought of the charter flight that many of the players took on the Monday of the 2008 U.S. Open at Torrey Pines, a plane that flew from San Diego to Hartford while Woods and Rocco Mediate traded shots in that insanely tight playoff. Their plane had TV reception. The pilot taxied to a private hanger and came to a stop but nobody moved. “We just told the flight attendants to go inside and let the tournament people know we’d deplane as soon as it was over.” Lee Janzen later told the writer John Feinstein.

I looked around to see if my neighbors were having a similar malfunction. You can imagine my dismay to see them playing Solitaire or napping or reading Bruce Springsteen’s autobiography. Under normal circumstances, all excellent activities. But on this particular Saturday afternoon? I was ready to tell anybody who might have cared that Woods turned at one under. Shot Tracker is not exactly basketball on the radio. (Now that’s fun.) Still, I know where the shots went. Two bogeys, three birdies. He hit two of seven fairways. He missed the green on both par-3s, for the two dropped shots. It didn’t look like a pretty nine holes on Shot Tracker.

By 2 p.m. TW time — 5:00, Eastern — I was situated in front of hi-def TV at a restaurant in the Philadelphia airport called Cibo, and the good folks there had CBS on, in glorious color. Bright sunshine, shiny greens, emerald rough, Woods, in tennis whites from head to toe, was in it on the first hole (his 10th) and again on the fourth and the sixth. His swing (many have observed) looks different, particularly from impact to follow-through. Well, it would. He’s 42 and playing golf with a fused back. He’s not the Gumby he was when he won all those junior titles at Torrey Pines. He sounds different, too. He said he didn’t know what to expect from his game. (“Second sucks” seems like another lifetime.) He talked about being nervous all the time on the course. (What an admission.)  He told a mildly naughty story, in the company of a small group of reporters, when play came to a temporary halt during the second round, when he was grinding out a cut like the workingman golfer he now appears to be. At Cibo, I wasn’t the only person watching. 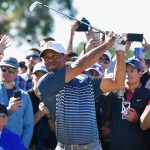 You may also like All eyes on Tiger: What we’ve learned 36 holes into Woods’s comeback

The flatscreen next to the one showing the CBS telecast showed something called ReachMeTV. Evidently, it’s some sort of airport network. A discussion underway posed two insightful questions. Does golf need Tiger? Does Tiger need golf? I have my opinions and you have yours. To the first, you could say golf was here long before Tiger played his first round at Torrey Pines 30 or so years ago and it will be here (you hope!) long after he’s gone. As for the second, that’s for him to say. Still, the site of Tiger Woods on a golf course, any course, is an exciting thing, because of all he has done on courses all over the world. I found it exciting just seeing Woods on the Liberty National course for the Presidents Cup last year, even though he was just there helping out. What he’s done is not likely to happen again. He broke the code. For a while there, he did — he broke the code.

CBS, in its wisdom, showed the golf tournament. It cutaway to Woods, so we at Cibo and you wherever you were could watch him do this and that. But it showed the golf. Ryan Palmer, leading. Guy has been grinding out a good living for years. Jon Rahm chasing. A mega-talent. Luke List, too. Good-looking swing — no hit in it. Seventy-seven players still at it on this Saturday, Tiger Woods among them. Not the Tiger Woods you remember from 2013 or 2000 or 1997 or any other year. Tiger Woods on a winter Saturday in 2017. He shot 70, two under. It was a grind from start to finish, as best I could tell via Golf Channel, iPhone, Shot Tracker, CBS. He has shot hundreds of 70s in his life. But never one exactly like this one. I guess that’s why I was so interested to see it. “What will Phil do next?” was a fun question in an old ad campaign. What Woods will do is a serious question that will ultimately aggregate all his life experiences, on the course and off the course, in good times and in bad.

The American Airlines baggage department just called. They have my suitcase and golf bag. My wife just called. She’s coming to the airport. I’m packing up here. Here’s Dottie, Dottie Pepper, holding a mic. A quarter past three for her, a quarter past six here at Philadelphia International. “I didn’t have much,” the old champ told her. “I grinded and fought.”