The PGA Tour announced major changes to the FedEx Cup Playoffs on Tuesday, and people are angry.

Earlier in the year, the Tour announced that the playoffs would be reduced to three events in 2019. But they revealed little about how an updated points system would work. Now we know.

The top 125 players at the end of the regular season will make the field for the Northern Trust. The top 70 after that event will advance to the BMW Championship. Finally, the top 30 will earn spots in the Tour Championship. That’s all more or less status quo from the current system. 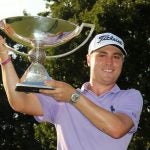 But at East Lake, things get weird. There, players will be awarded a to-par score to start the event based on their rankings. For example, the No. 1-ranked pro will begin the finale at -10, No. 2 will start at -8, and so on. Players in the 26th-30th spots will begin at even par.

Next year's Tour Championship will have strokes-based scoring system (below). All 30 players enter East Lake w/ assigned value. Winner take all from there

The winner of the Tour Championship and the FedEx Cup will be one and the same.

Reactions to the new “head start” for the Tour Championship leader were swift, with complaints from media members and fans alike flooding social media after the announcement. Here’s a sampling:

The Tour Championship is no longer a tournament. It's a FedEx Cup finale. If you can get your brain around that radical change, you can embrace this. I love clarity coming to the FedEx Cup finish, with not having to be an MIT professor to figure out how points would decide it.

Def the under the radar news that the Tour Championship is no longer a tournament, had quite the legacy on @PGATOUR feels kinda odd that this year is the “farewell” https://t.co/wEZkQhjwjn

Here's the problem: as a golf fan, I DON'T CARE about the FedEx Cup. I watch to see who wins each week. Seeing who can win a contrived playoff system, has no appeal to me. And now the tiered start makes the reason I watch less interesting. https://t.co/MFAffUe2jw

FedEx Cup prize pool will increase to $60 million next year, with the winner taking home $15 million.

Nice step up from this year’s minimum wage and bonus set of steak knives.

Totally get that. You put your finger — your middle finger, perhaps? — on the problem with a postseason concept in golf, especially calling it "The Playoffs." These aren't playoffs. A lot of appeal has simply been getting the greatest players to compete in four events in a row. https://t.co/7K1Ul7o0re

Dumb. How can it be considered a win if someone starts ten under? It’s like spotting a team a touchdown in the Super Bowl.

It's terrible and too contrived and shouldn't count as a proper tournament Victory. Should have proper playoffs whereby all points reset and if u finish in the top 100, 70, 30 you progress.