Fantasy Six Pack: Players to get in your lineup at the Greenbrier 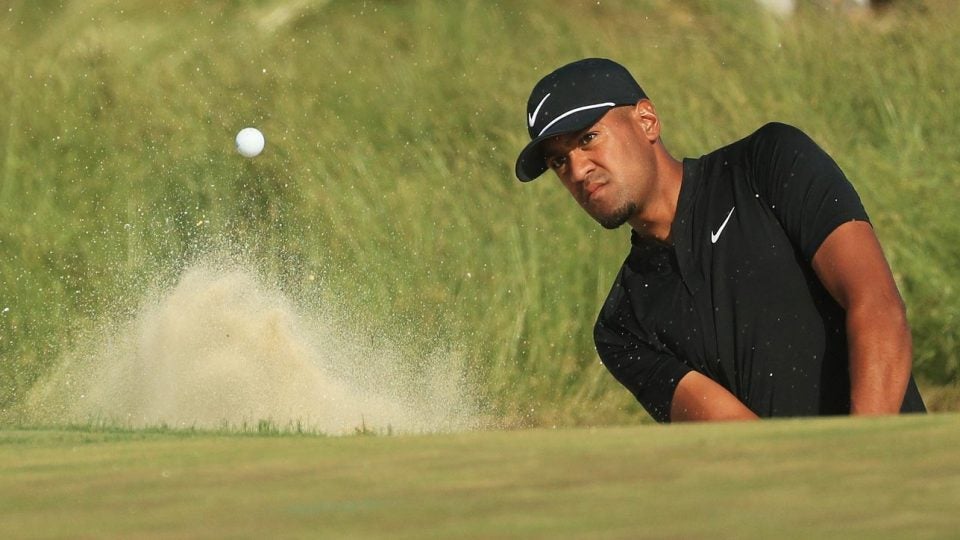 Our expert picks Tony Finau as a favorite to win at the Greenbrier this week. Finau finished in fifth place at the U.S. Open in June.
Getty Images

Welcome to the Fantasy Six Pack, where we highlight six golfers to use in two popular fantasy golf platforms, DraftKings and FanDuel. On each, you must select six golfers for your lineup under a specific salary cap. (DraftKings $50,000, FanDuel $60,000). As a reminder, I’m a golf nut with a 1.3 handicap and a nose for analytics — according to Rotogrinders, I’m one of the top daily fantasy golf players, and just three weeks ago I made over $25,000 in profits!

After a week where Tiger Woods was the headliner, the Tour heads to West Virginia. Before the week even got started, there was some high drama in the golfing world. I happened to be at the epicenter of it, as Josh Berhow explains in this article for GOLF.com on the controversy. If you are a golf fan, and haven’t heard about this yet, you’ll want to check it out.

Now, onto this week, where we have a rather weak field, but NOT weak contests! Three different contests offering 100K first place this week, as we ramp up into this year’s third major.

The Tournament: A Military Tribute at The Greenbrier

Skills emphasized: Each of the last seven winners has ended up in the top 20 in SG: T2G for the week, while all of them except Scott Stallings were inside the top 10 of Strokes Gained-Putting. Putting is so hard to predict, but we’ll do our best to weed out who’s trending!

While we weren’t able to capture the winner last week, six of the seven golfers we mentioned made it through the cut, and as long as you were able to avoid J.B. Holmes, you likely had a profitable week! Want to see how I was able to win the $33 contest on FanDuel last week? Check out our full recap of all of Tour Level’s action last week.

Tony Finau (Odds: 13/1 DraftKings-$11,500 FanDuel: $12,000) What a year it’s been so far for Tony. He earned top 10 in 2018’s first two majors. That after a near tragedy at the par three contest during the Masters week, where he slipped and dislocated his ankle. He was lucky to escape a significant injury, but it was a scary sight to see. Now he heads to West Virginia as the favorite to win the tournament. Wow. This tall, athletic golfer enjoys hitting it long off the tee, ranked third on tour this year in that category, and seems to use that length to his advantage here earning a 7th place finish and a 13th in his two visits (2017, 2015). Tony also uses that length to obtain one of the best par four scoring numbers on Tour, ranking 5th this year, also something that spells success here since it is a par 70. Fitting him in a lineup on DraftKings won’t be as easy as it is on FanDuel, but a win is coming soon for Tony, and it might just be this week against a weak field.

1. Russell Henley (Odds: 25/1 Draftkings-$10,400 FanDuel-$10,500) It’s not often that a golfer doesn’t seem to match up statistically for the course, but then has some high finishes. This applies to Russell at Greenbrier as he’s had back to back top 5’s and has made all three cuts since 2013 at The Old White TPC. He also comes into the week in some of the best form he’s been in all year, making four straight cuts, coming off his best finish of the year, a 6th place finish just two weeks ago. Henley is an incredibly streaky player and ball striker, and last time out he was on, hitting almost every green, and fairway, an excellent recipe for success. If that continues this week, you can expect another run at a top 5, which would mark his third straight top 5 here at The Greenbrier.

2. Joaquin Niemann (Odds: 33/1 DraftKings- $9,700 FanDuel- $10,400) The Wonderboy from Chile, this nineteen-year-old phenom is still playing under the unlimited sponsorship exemptions category, but, Niemann is on the verge of receiving his full PGA Tour card, one of only two golfers in the past ten years not to go through the Web.com Tour, joining Jordan Spieth and Jon Rahm. That’s some darn good company to be in. We haven’t quite got a full list of stats published for Joaquin, but here are some of the most important ones we were able to find. He would rank 6th regarding birde or better percentage, 15th in strokes gained: tee to green, second in strokes gained: approach and 17th in par four scoring, pretty good stats to have around this course. Niemann, believe it or not has also played the course, last year, where he finished 29th as an 18-year-old amateur. He’ll likely be able to parlay that success into another big finish this week.

3. Ryan Armour (Odds: 66/1 DraftKings-$7,700 FanDuel-$8,700) Everything seemed to come together for this 39-year-old last week. He’s made five straight cuts now and was able to use his accuracy off the tee last week to earn himself his best finish of this calendar year (he won over the fall circuit of the current PGA Tour season, but that was in 2017). I mentioned his driving accuracy is one of the strong suits of his game, ranking second on Tour, but his par four scoring is where he makes up a ton of strokes, ranking FIRST on the year. Over his last five starts, Armour ranks 5th in the field in strokes gained: Tee to Green and 10th in strokes gained: ball striking. He’ll look to make amends for his missed cut last year, and look to better his 2015 result where he finished 22nd. I was able to spend a little bit of time with Ryan out in Maui this year at the Tournament of Champions and let me tell you, he might be the easiest person to root for. A genuinely friendly and caring human being, Ryan will be on my root-for list every single week.

4. Cameron Percy: (Odds- 165/1 DraftKings-$7,000 FanDuel-$7,600) Truth be told, this is not a name I expected to be writing about this week, but here we are. Percy has found some consistency over his last four starts, making every cut, including one top 10 in those four starts. For a golfer priced at 7K, we are just looking for him to make the cut, and Cameron seems to be doing that and then some! He’s gained over 1.5 strokes in total strokes gained over his last five starts, ranking him 15th in the field. Percy does most of his damage though around or on the greens, as he ranks 18th in putting inside 10 feet this year, and 31st in strokes gained around the green. This will be his fourth trip to the Greenbrier since 2012; he holds a 2/3 record here with a 30th place finish back in 2013 being his best result.

5. Norman Xiong (Odds: 200/1 DraftKings-$6,500 FanDuel- $7,600) He may not have much form to go off of, as this is Norman’s first start on the PGA Tour. This incredibly talented sophomore has decided to leave school early and chase his dream of becoming a PGA Tour golfer. In his two years at Oregon, Norman won the Phil Mickelson award, given to the nation’s top freshman, and this year won the Jack Nicklaus award, an honor bestowed on the nation’s best Division 1 golfer, as well as the Fred Haskins award, an award given to the best collegiate golfer. He finished the year at Oregon with a scoring average of 69.05, with 23 rounds in the 60’s. For a 19-year-old, that record rivals the aforementioned, emerging superstar from Chile, Joaquin Niemann. Norman’s game has even been compared to the GOAT Tiger Woods by former PGA Tour player and coach Casey Martin. I’m excited to see him make his pro debut. The DFS sites don’t quite know who he is yet, so the price could end up being very cheap this week.

J.B. Holmes (Odds: 50/1 Draftkings $9,000 FanDuel- $10,600) After making four straight cuts, with three consecutive top 15’s and two straight top 10’s, Holmes regressed and was not able to make the weekend last week. However, he missed it on the number, so he wasn’t far off of being able to make a weekend run. Holmes ranks 7th in SG: BS in the previous five starts, earning on average just shy of 2 strokes per round. J.B. goes with his putter and lately it’s been pretty warm. He’ll need that to continue this week if he wants to make amends for his missed cut last week.

Where to play this fantasy golf this week:

DraftKings: Three contests with a 100K first prize. Pretty good for a rather weak field!

FanDuel: Another increase in FanDuel’s main offerings, as golf continues to improve as a viable fantasy option for FanDuel

These are just some of the many contests between the two sites. For a full breakdown of all contests and offerings check out the links below.