Our American Summer: Enjoy these FedEx Playoffs, because the times, and the season, are soon changing 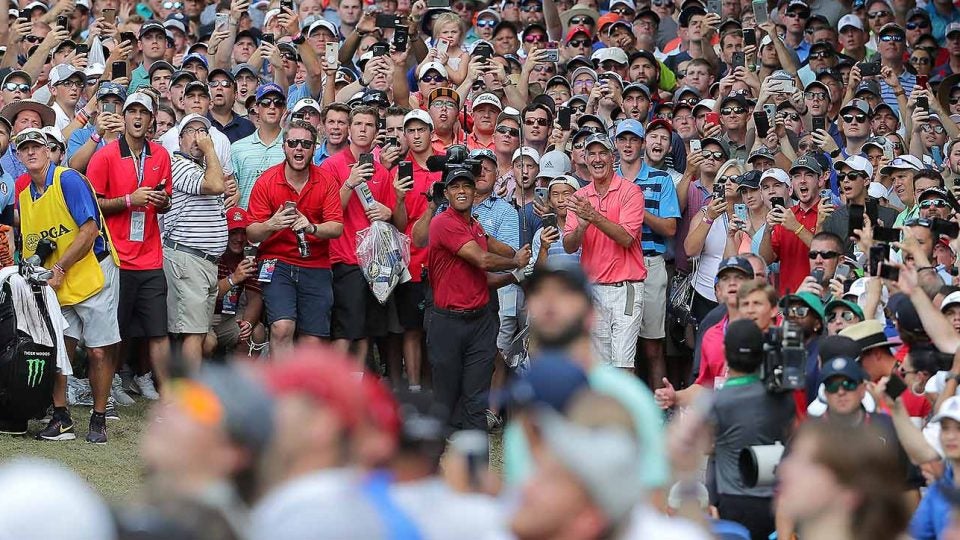 Get it while you can. The whole thing is going fast. June and September are summer’s “shoulder months,” as they might say in the tourist trade. I really wouldn’t know; I’m an accidental tourist, at best. What we all know is the beating heart of summer is July and August and always has been. (The number of American radio stations that still cycle through Beach Boy hits is a reassuring thing.) We’re in the final weeks of the two-month stretch when you can have balls in the air at four and a Carvel cone in hand by eight. It’s all good.

On the spectating side, July is the British Open and August the PGA Championship. At least, it has been. The final PGA-in-August was played at Bellerive this month. What a way to bring down the curtain. It was so crowded at the end—with Koepka tapping in for his third major title with Tiger Woods 50 yards away, cheerfully describing his miracle 64—that there was no real chance to say goodbye. Maybe you know the phrase Irish Exit. I do it all the time myself. You just slip on out.

This week, the Tour stops in New York. Then, Boston, then Philadelphia, then Atlanta. (I continue to think of the Tour in terms of a map with dots on it connected by hand-drawn red lines. That, of course, is how the Tour got its name. It’s a tour.) Those four events comprise your FedExCup Playoffs, to use the spelling Ponte Vedra is pushing. Occasionally but not often you will hear a fan refer to the “FedEx events.”

What it really is, is four more good tournaments on network TV on the weekend featuring players whose names you know. Nothing wrong with that. More golf, crammed in this year between the final major and the Ryder Cup. Next year it will all feel different, with the PGA in May and only three FedEx events, all played in August. It all makes sense. But change is never easy.

I went to my first PGA in August of 1985, when Hubert Green won, two shots ahead of Lee Trevino, at Cherry Hills, in Denver. I stayed in a University of Denver dorm room and the golfer I caddied for, a New York club-pro named Kevin Morris, made the cut with a shot to spare. I went to my last PGA-in-August at Bellerive, near St. Louis. I stayed in a Marriott and rooted for Adam Scott, who made a bogey on the last to finish third, behind the golfer of the year and the comeback player of the year(!). In theory reporters should not have such naked rooting interests, but I can’t shut off that side. I carry multiple visas, one of them stamped FAN.

Let me take a quick break in the action (ha!) here to stand with the 200-plus papers that are pushing back on the phrase “fake news” and those promoting it. I note with admiration how thoroughly Doug Ferguson of the AP, Steve DiMeglio of USA Today, Bob Harig of ESPN and Karen Crouse of the New York Times, among others, cover the news coming out of our little green corner of the sporting landscape. Many tournaments, many air miles and road miles. Many Marriott points—and not much opportunity to use them, at least not in July and August.

The PGA in August, a staple of the calendar for decades, had built-in problems, including intense heat and soft courses and tired dog-day fans. But there was something mellow and gorgeous about it, too. The new mid-May date will solve some problems and bring others. Bethpage Black on Long Island next year, Trump Bedminster in New Jersey in 2022, Oak Hill in Rochester in 2023—you can pretty much count on cold mornings, mushy fairways and rain delays, plus those May sunsets, when the air cools fast.

My idea never gained any traction, to have the Pebble Beach Pro-Am morph into the PGA Championship, with that national golf shrine becoming the annual venue for the PGA and the event becoming the year’s first major, in early March. It will take years for the PGA to settle into its new date. I could see a small rotation: something in the Southeast (East Lake in Atlanta?), something on the West Coast (Olympic in San Francisco?), something in the Midwest, likely on a course the PGA builds and owns. Greater St. Louis would be wonderful for that.

The PGA at Bellerive, about 25 miles from St. Louis’s Gateway Arch, was maybe the best PGA I had ever attended. Certainly one of them. Yes, the course played soft and short, so viewed that way it looked like an ordinary Tour event. But the field was loaded with names and talent, the prize (that Wanamaker Trophy) is grand and the occasion was great. The fans had everything to do with it. I have never seen tees and greens so thickly ringed with the sheer mass of humanity as I did at Bellerive, despite the outrageous heat.

Part of that was Brooks Koepka, trying to win his second major this year, and doing it the Koepka Way, pop-boom-bam off the tee, followed by the ridiculous amount of touch he has on all of golf’s little shots. A bigger part of it was Woods’s return as a main-stage act. The biggest part of it was and is the nature of the St. Louis fan: patient, courteous and, most significantly, into it.

Summer is a little slower in the Midwest. That’s why baseball is still the summer game in St. Louis, still the pastime. Thousands and thousands of fans waited all day to see Woods make that birdie putt for solo second late on Sunday, not that they could have guessed such a thing was going to happen. I wish I had a dollar for every time somebody said to me over the years, “I’d rather just watch it on TV.” Nobody in St. Louis was saying that. (Well, one cabbie I had did.) The fans danced on out of Bellerive, out of the course/sweatbox and into the buses, to their cars parked miles away.

Summer’s here and the time is right
Summertime, and the living is easy
Every now and then we hear our song
We’ve been having fun all summer long.

I took a city bus to the course in ’85, in Denver. That was great. I remember hearing that Jerry Garcia had died, driving to Riviera in Los Angeles one day, in ’95 when the PGA was there. I vaguely recall the ending of the ’05 PGA at Baltusrol, won by Phil Mickelson, as being weirdly subdued, owing to its Monday-morning finish. The thing I remember best about the 2015 PGA Championship, aside from Jason Day’s decisive win at Whistling Straits and watching Mark Steinberg wheel Justin Rose’s travel bag out of the player locker room Sunday night, was the spectacular beauty and range of sights of downtown Milwaukee. I could say the same of Rochester, Atlanta, Louisville, Detroit, Charleston, Minneapolis, among other Lower 48 cities. Up early for a jog and meandering drives “home” at dusk, often along a river or a lake or a park, or through city neighborhoods where golf barely makes a dent while playground basketball rules the night. Our American summer. What’s better than that?