Fantasy Six Pack: Get these players in your DraftKings and FanDuel lineups for the U.S. Open

Welcome to the Fantasy Six Pack! If this is your first time joining us, we highlight six golfers to use in two popular fantasy golf platforms, DraftKings and FanDuel. On each, you must select six golfers for your lineup under a specific salary cap. (DraftKings $50,000, FanDuel $60,000.) A little about me: I’m a golf nut with a trending upwards 4 handicap (since having my son, James, it’s skyrocketed) and a nose for analytics — according to Rotogrinders, I’m one of the top daily fantasy golf players and ranked inside the top 5 of all players. Come check out all of my analysis at Awesemo.com, where this year I’ve been able to secure a profit of close to $100,000 and last week pocketed another $12,000!

Our first column after a long break and the recommendations performed admirably. Only Scott Piercy missed the cut while the other 5 golfers all made the cut and had decent finishes. Koepka was the only pick who failed to hit his value.

Skills emphasized: This marks the second straight week where the pros face a course setup at less than 7,000 yards. Hitting the fairway will again be paramount, as well consistent iron play as the rough around the greens is almost a guaranteed bogey for anyone who finds it. 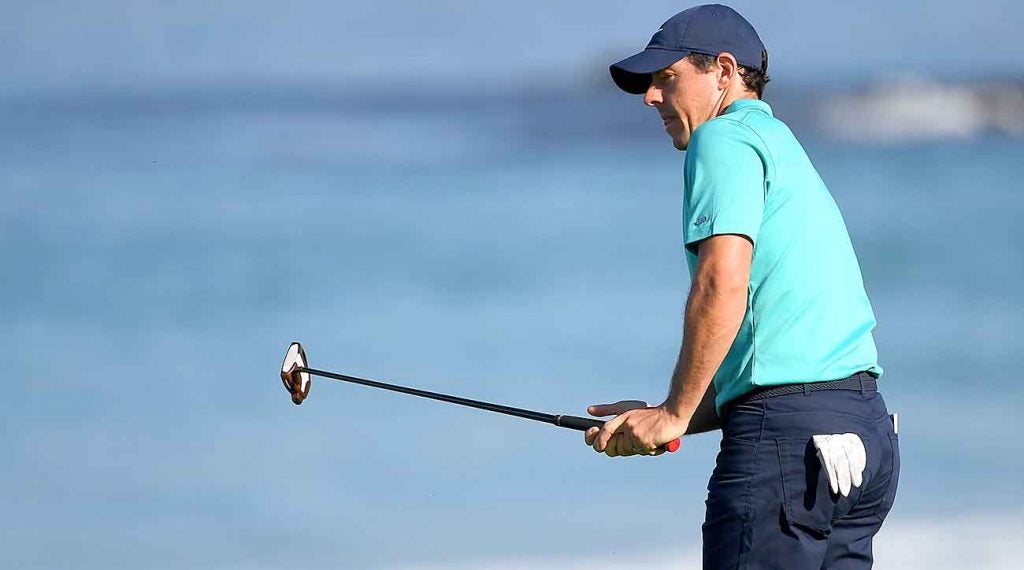 Rory Mcilroy enters the U.S. Open as one of the favorites.
Getty Images

Rory McIlroy (Odds: 8/1, DraftKings $10,500, FanDuel $11,800) When Rory is playing as well as he did last week at the RBC, he is by far the hardest golfer to beat on the planet. He had every part of his game working last week: driver, approaches, scrambling, and yes, the putter. He comes to Pebble as one of the top options on any board, betting or daily fantasy sports, and he’ll need another top 5 to pay off those high prices. If he plays like he did last week, I like his chances.

Adam Scott (Odds: 30/1, Draftkings $8,600, Fanduel $10,400) In his last event, the Memorial, Scott played well but could quite match Patrick Cantlay’s ridiculous Sunday. His game seems to be in fantastic shape, though, as prior to that runner-up he cracked the top 10 at the PGA.

The stats say the putter let him down and his tee-to-green game was good enough to win. Anytime you gain on average of 3 strokes per round against the field you should have a chance at a title, and possibly blow away the field. But with Scott, putting is his final hurdle to get back to the winner’s circle.

Webb Simpson (Odds: 50/1, DraftKings $7,700, FanDuel $9,600) Webb’s resurgence has been fun to watch. He’s a likeable guy and easy to root for. His putting has fueled his rebirth. After going to the arm lock method, he won last year’s Players and climbed all the way back inside the top 20 in the rankings.

Last week he gained on average of 2.5 strokes putting per round, which obviously is much better than average. But tee to green he also looked great, and when he did miss a green he got up and down more than 90% of the time. He looks ready to contend this week.

Looks good off the tee: a player who may disappoint

Jason Day (Odds: 25/1, DraftKings $9,100, FanDuel $10,800) Course history will likely draw bettors to Day, but I’m not sure about his current form. He doesn’t look comfortable out there and may still be fighting a back issue. I’m staying away.

Out of Bounds: a little-known name who might surprise

Scottie Scheffler (DraftKings $6,700, FanDuel $8,200) He’s dominating the Web.com tour and earned a spot this week through sectional qualifying. On the Web.com tour season, he has 14 starts, one win, two runner-ups and four top 10s. That’s impressive. He’s risen to 133rd in the world, and is just one win away from joining the PGA Tour faster than his Web.com grad date. Either way, he’s already secured his card for next year.

Where to play this fantasy golf this week: