Bubba is back! After a two-year winless drought and thoughts of retirement, Bubba Watson is a champion again 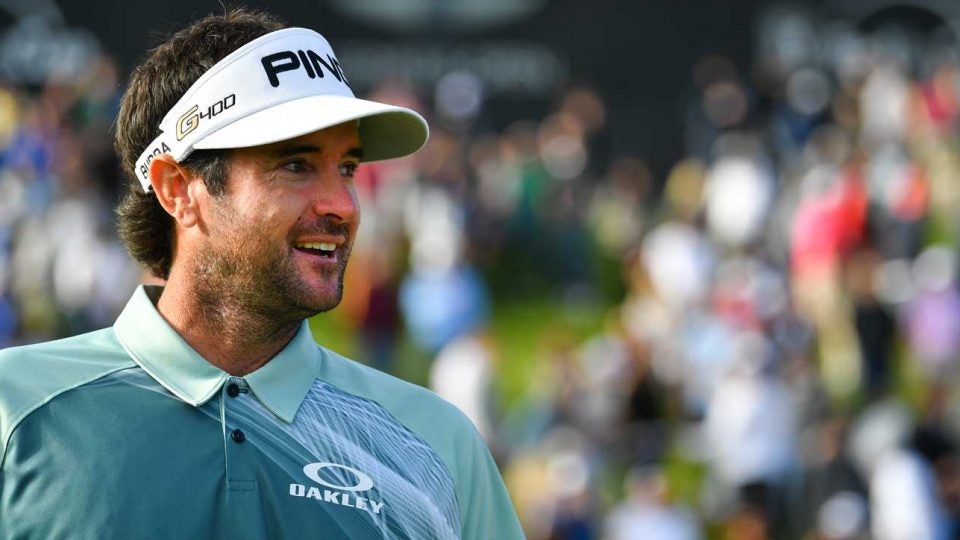 PACIFIC PALISADES, Calif. — On Friday night Bubba Watson played in the NBA All-Star Celebrity Game at the Staples Center in downtown Los Angeles. Among the lowlights for Watson was a running jumper he launched from the baseline that Hall of Famer Tracy McGrady casually swatted out of bounds.

“He’s got like just under 800 blocks for his career so I gave him one more, you know?” Watson cracked.

The clip of Watson’s rejection went viral in golf circles, but it was the two-time Masters winner who had the last laugh at the Genesis Open on Sunday evening when he proved dunks are easier without defenders. Watson holed a bunker shot at Riviera’s par-3 14th hole for birdie en route to a two-under 69 and a two-stroke victory over Tony Finau and Kevin Na.

It was Watson’s 10th PGA Tour title and third victory at the Riv, tying the win total of Ben Hogan and Arnold Palmer at this illustrious event. It was also Watson’s first victory since he won here in 2016.

It has been a tumultuous two years for Watson, who dealt with an undisclosed illness, various family issues, and a ball change that seemingly did him no favors. He ranked No. 7 in the Official World Golf Ranking when he was left off the 2016 U.S. Ryder Cup team and served as a vice-captain that week to Davis Love III, but entered this week at No. 117 after his worst season in the FedEx Cup era.

“It was the lowest point I’ve ever been at in the game,” he said.

No wonder the tears started flowing after Watson holed an eight-foot par putt at the 72nd hole for a 12-under 272 aggregate. Watson said he wondered if he’d ever win again. He even considered retirement.

“I was close,” he said. “My wife told me to quit whining and play golf. She’s a lot tougher than I am. I get a paper cut and I’m out for a week.”

Cancel the retirement party, because Bubba Golf is officially back. Watson showed great patience on the course as a host of players vied for the title in Tinseltown. Na, Patrick Cantlay and Ryan Moore shared or took the lead on Sunday, and Phil Mickelson closed within one stroke, but Watson didn’t panic. His confidence never wavered when he made three bogeys on the front nine — at Nos. 3, 6 and 9 — and went out in one-over 36.

Watson’s beautiful mind — and game — was on display for all to see this week as he shaped shots around Riv’s signature eucalyptus trees. His fans and peers alike marvel at Watson’s ability to see and execute shots that others don’t, or can’t. To Watson, his shot-shaping prowess comes naturally. Take, for instance, what he did on the 7th hole after hooking a 2-iron into the thick stuff. Watson doesn’t see in straight lines; he sees in curves. So finding the small gap between two big limbs with the ball two or three feet above his feet was no big deal. His caddie, Ted Scott, has witnessed Watson perform magic from more dastardly spots (10th hole at Augusta, anyone?), but still … it never gets old watching your boss flicking a wedge, barely covering a bunker and rolling his ball to the back of the green.

“That’s the essence of Bubba Golf,” Scott said. “That’s why I have the best seat in the house.”

Watson’s decline last year was swift, spiraling and seemingly irreversible (not to mention surprising, given his given his extraordinary length and artistry). He endured a “medical issue” that he downplayed as “nothing worse than a paper cut,” but caused him to lose more than 20 pounds. He said he dreaded stepping on the scale as his weight plummeted as low as 160 pounds. His wife Angie had knee surgery, a period during which Bubba was a stay-at-home dad, and son, Caleb, started kindergarten.

Buoyed by his improved health in 2018, Watson began to see signs of his game returning, even if the early-season results — before this week a T-35 at Pebble Beach was his best finish — didn’t indicate a resurgence. It all came together on Riviera’s back nine as Watson canned three straight clutch putts starting at the 11th. Then he dunked it from the bunker at No. 14.

In typical Bubba fashion, there’s a hilarious story — call it potty humor — about his hole-out. Watson had to go to the bathroom and asked fellow playing competitor Cameron Smith whether he knew if there was a restroom nearby. Turns out there was one on the way to the next hole. “If you can wait a couple more shots,” Smith said.

Watson had a better plan. “I’m just going to hole it and go to the bathroom,” he said.

When Watson arrived at his ball in the sand, he asked Scott if he could stop it. Scott nodded, handed Watson his 60-degree wedge bent to 63 degrees, and added, “You haven’t holed one of these in a long time.”

The ball came out hot, a heat-seeker, that hopped once, crashed into the flagstick and disappeared in the hole for a birdie. Watson pointed at Scott and told him he called it. Then Smith came over and congratulated Watson on calling his shot.

It was all part of a week in which Watson wasn’t sure which was better: filming an episode with Jay Leno, hanging with pal Ellen DeGeneres, or watching a taping of The Big Bang Theory. Just another week in the life of Watson, who spends his downtime on Segways, playing mini-golf, or zipping across the Baltic Sea on an inflatable raft. (True story.)

“Fortunately, I don’t have to stand on a range and watch divots fly for 10 hours,” Scott said.

Watson once said he would retire when he achieved his career goal of double-digit victories. But he said this victory gives him a minimum of two more years and “I’m going to be at Augusta until they kick me out.”

“I don’t know about you guys, but I am thrilled,” Watson said of achieving his career goal. “Nobody thought that Bubba Watson from Bagdad, Fla., would ever get to 10 wins, let’s be honest. Without lessons, head case, hooking the ball, slicing the ball, can’t putt, you know? Somehow we’re here making fun of it. So, yes, I’ve got to set a new goal.”

Watson wasn’t ready to set a new target, but he sounds pretty intent on someway, somehow making the U.S. Ryder Cup team that will play in France in late September.

“I really want to be on a Ryder Cup team that wins,” he said. “I’ve been bugging (U.S. captain) Jim Furyk about being assistant captain. His text back to me this week said, ‘No, you’re too good. You need to be on our team playing.’ ”

How do you say Bubba Golf in French?