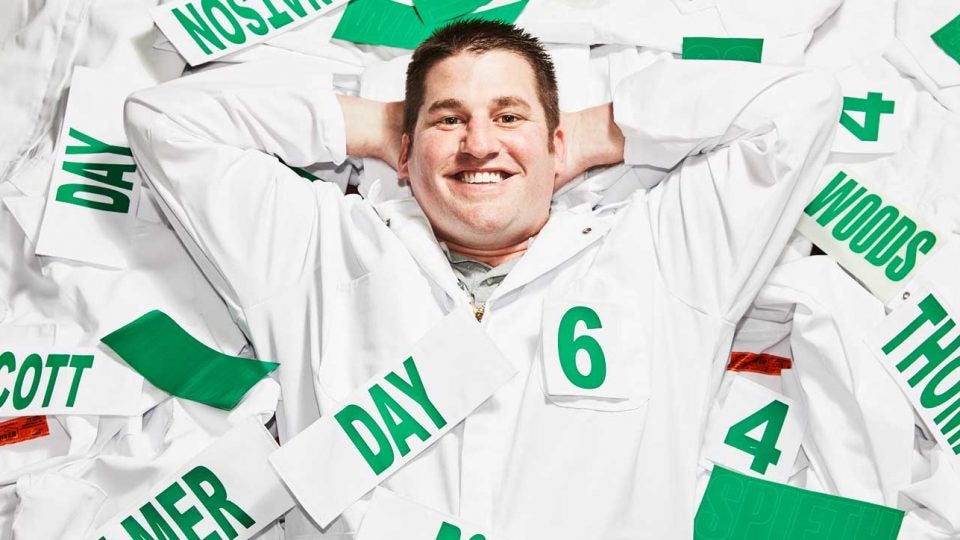 Few scenes in golf are more delightful than the kid-caddie brigade that invades the Par-3 Contest every Masters Wednesday. Junior loopers playing in bunkers, hopping over microphones and racing to pull pins for Daddy.

In 2018, father-of-one Justin Pillmore was taking in the festivities from his couch in Sellersville, Pa., when he noticed something was amiss.

“You look at Augusta National, and from the parking lot to the flowers to the birds chirping, pretty much everything there is perfect,” Pillmore recalls. “The one thing I thought was really weird was all these kids are running around in different uniforms.”

He was right. Young Horschel, Hoffman and Finau all had square, green club logos on their chests, lovingly hand-crafted by Zach Johnson’s mother-in-law. Alex Noren’s toddler, Iris, wore an oversized bib with her surname stitched on the back in black. Across the property, Caleb Watson, son of Bubba, sprinted around with a No. 1 on his chest while Sharlene Vegas, daughter of Jhonattan, had her name inscribed in perfect, emerald green cursive. 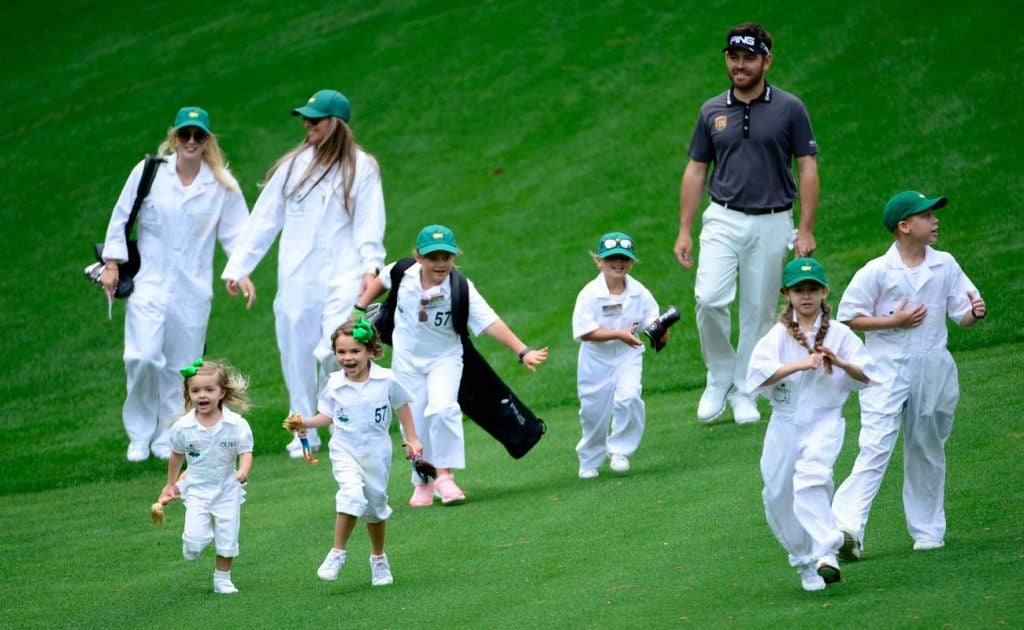 Until 2019, most of the uniforms worn by children at Augusta National were all different.
Getty Images

The variety at Augusta was an untapped market — Halloween was six months away — and with his 2-year-old Gideon watching beside him, CaddieUniform.com began to take shape.

Ironically, Pillmore originally wanted just the one uniform for Gideon, but after searching at local seamstress shops (and even a call to the caddie master at ANGC) he couldn’t find one. Naturally, he splurged and bought in bulk from a clothing manufacturer — 100 tiny white jumpsuits! Surely, other sports-crazy parents would be as interested as he was, right? Let the internet do its thing.

“They sold like hot cakes once they were posted on social media,” Pillmore says. “It just went crazy.”

Pillmore made an Etsy account for his new “business,” added personalized name badges to the jumpsuits and cleared his first 100 orders in two months. The high four-figure investment was well worth it. Halloween was now his favorite holiday. He even sold Gideon’s uniform while waiting for another shipment to arrive.

So in the tiny makeshift studio on the second floor of his house, he spent the fall months trying to replicate the secretive font and pigment (Pantone 342) used on Augusta’s adult caddie uniforms. According to Pillmore, this commitment to consistency was applauded by the caddie master at Augusta, who agreed to direct any curious Masters families his way.

The first Tour family interested was Dowd and Webb Simpson, proud parents of five par-3 caddies. “I feel like everyone deserves a chance,” Dowd said. “I took a chance, and he produced really excellent work.” She also passed along Pillmore’s contact info to about half a dozen other Tour wives. Next came Marc Leishman’s wife, Audrey, via a direct message on Instagram. 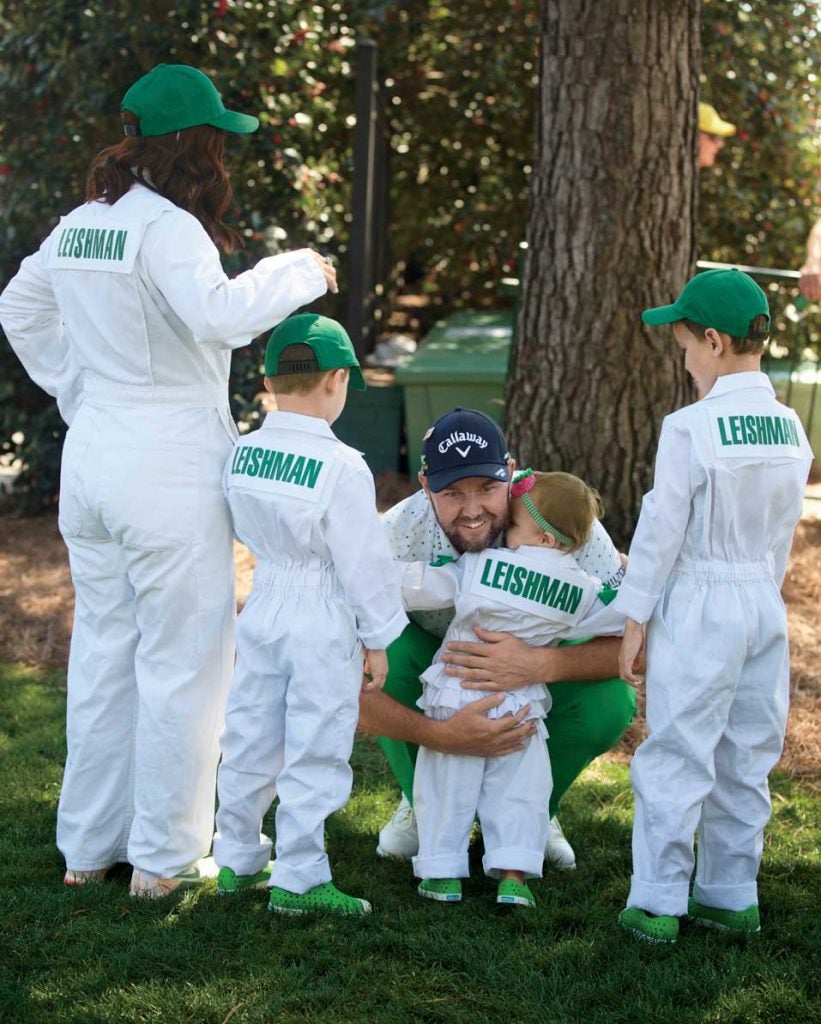 “I saw they looked like true authentic caddie uniforms and decided to give them a try,” Audrey said. She also loved the tiny ruffles Pillmore added to jumpsuits destined for girl caddies. Leishman bought a uniform for each of her three caddies, spread word to another half dozen Tour wives and even scored Pillmore a ticket to the 2019 contest.

“In one year,” Pillmore says, “to see over 40 uniforms that I created be on the national scene at the biggest tournament in golf was the coolest thing.” 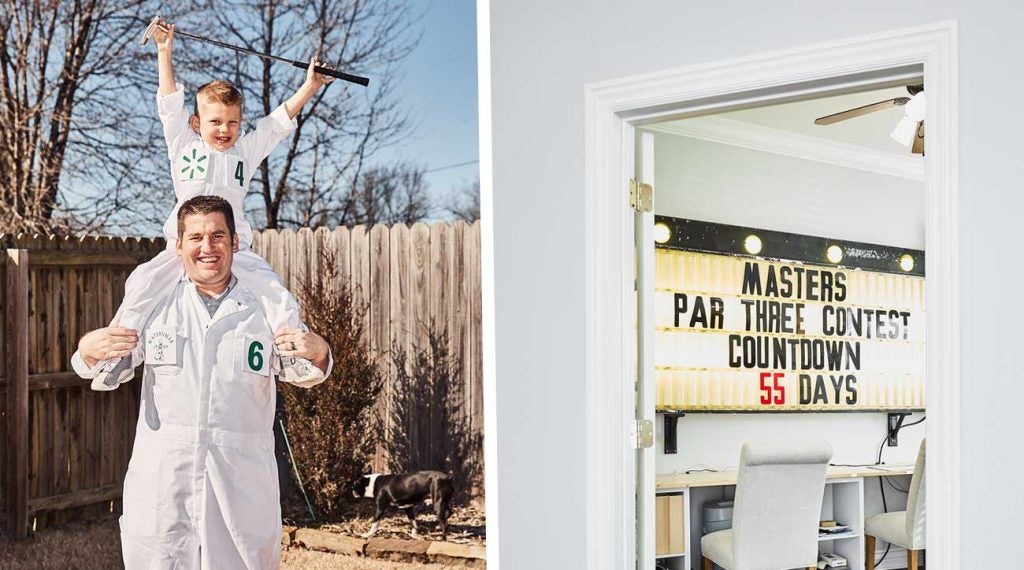 Justin and Gideon Pillmore both know that Masters week is a big one for the family uniform business.
Steven Denton

For about 80% of the Masters kid caddie bibs market, and even more online, it was well worth the hustle. Pillmore had spent the beginning of the week cooped up in Mrs. P’s Alterations, a seamstress shop just five miles from Washington Road. It’s a good thing, too, because Tatum Johnson (son of Dustin) was just one of a number of clients who needed last-minute alterations. Before the golf world had come to a screeching stop, Pillmore had planned to be in Augusta again this year, camped out at Mrs. P’s. Even without a ticket to the event, he had his hotel booked for 11 months.

Back in Arkansas, this is still a very small shop, literally, with operations taking place just outside of his Gideon’s bedroom. No one makes a fortune selling niche costumes, but with about 700 bibs sold in the last 18 months (at around $100 a piece), it’s at least a part-time job. The rest is spent running a jump rope school throughout the summer in the Northeast. Once September arrives, uniform orders come streaming in.

In late February, just when it seemed everyone had their caddie uniforms accounted for, Pillmore received another two orders. One was for Caleb Watson, who had done plenty of growing since April 2018. The other came in an email from Jack Nicklaus’ team — the Golden Bear, suddenly in need of Justin Pillmore’s services. Three tiny white jumpsuits, please!

Buy your own Caddie Uniform!