He’s a Texan through and through.

Andrew Landry was born and raised outside of Houston, lives in Austin and is never shy about speaking his mind. This week the third-year PGA Tour pro heads back to the Lone Star State as something he’s never been before: a defending champ.

Landry returns to the Valero Texas Open to defend his title after winning his first career PGA Tour event in San Antonio a year ago.

GOLF.com’s Ryan Asselta recently caught up with the 31-year-old Landry, who was as candid as ever, talking about winning, heartbreak, and where Curtis Strange can shove his criticism.

GOLF.com: Last season produced the first win of your career at the Valero Texas Open. Having grown up in Texas, and having a ton of family and friends in San Antonio, how special was that first win for you?

Andrew Landry: That was honestly one of the most special moments of my life. I think it’ll probably be one of the most special until I win a major. To have my family, new baby, my wife there, it was crazy. My mom was about to pull her hair out. She went nuts! My dad’s just kind of low key and chill but my mom’s like, “Come on! Push harder!” It bothers me a little bit on the course because I’m like, This isn’t junior golf, mom. Just relax. But she’s fiery. 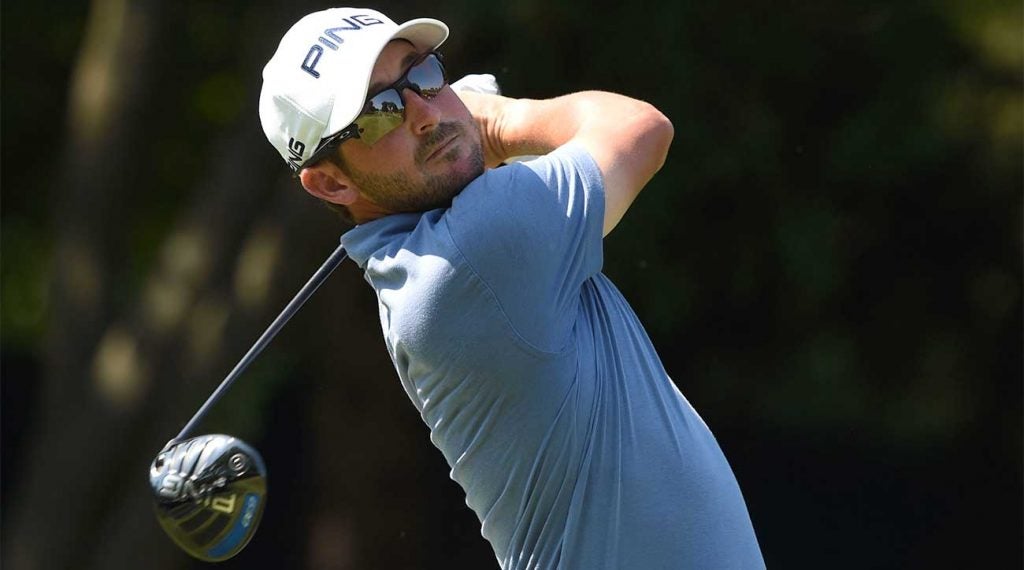 Andrew Landry closed with a 68 to win the 2018 Valero Texas Open by two.
USA Today

I know you used to be pretty fiery, just like your mom. How did you change that on the golf course?

Honestly, just working on it. Just understanding that golf’s not the end of the world. Also experiencing a lot of failure. That was probably the biggest thing that I overcame. Being right there at the first stage of Q-School and missing, then gong back and being right there, playing bad in the second stage of Q-School, and I just kind of had a great attitude towards it, and turned it around and got myself on Tour. But you do kind of lose that competitiveness, you know? There’s a fine line between being super competitive and having a good attitude and being super competitive and having a bad attitude. So you just have to kind of balance it.

I know there was some trying times back then going through Q-School. How emotional was that?

After shooting 81 at Q-School in the first round, I was literally in tears the night before the second round. I was just like, I’m done. I’m gonna quit golf. And the next day I just went out and shot 64! I finished 10th and made it through to the next stage. I was actually staying with Austin Cook that week and it was kind of cool to be able to experience everything with him. Cookie and I have done a lot together.

When you look at your golf game, what’s the biggest strength?

Driving. We looked back at stats throughout the year, and driving the ball well is super key for me. I’m not, obviously, the strongest player out here. And so being out in some thick rough is not helpful for me. When I drive the ball well normally, I’m gonna be hitting my irons well.

It seems like you don’t hurt yourself at all on the green. You ran a streak of over 225 consecutive holes without a three-putt. Is two-putting a state of mind?

I’ve done so much preparation in the way that I do my routine. It’s actually kind of fun. It sucks having to make a putt for the cut, but I thrive on that. That feeling of it’s a putt for the win. And it’s funny, cause in preparation I always make it.

Outside of the win in San Antonio, one of your most high-profile moments came at Oakmont, at the 2016 U.S. Open. You opened with a 66 and were the first-round leader. You ended up going off in the final group on Sunday before finishing T15. How much did the pressure of playing in that group help you get to where you are now?

It really has. Just the fact of knowing I can play out here. That was the biggest thing. Because I went through a whole year where I think I maybe had one top 10 and I just didn’t feel like I really earned myself a spot out there my first year. I didn’t have any expectations at Oakmont, which actually made sleeping Saturday night really easy. It was one of those weeks where if it would’ve been any other event I would’ve probably won, but everything just completely changed on Sunday at Oakmont. I mean it was a totally different golf course. It was hard. The pins were in ridiculous spots. And you just had to know where to miss it. And we didn’t do a very good job of it.

He's obviously got a couple majors under his belt, so I don't have the ability to tell him to f--- off, like I wanted to.

You’ve also lost in a playoff at the CareerBuilder to Jon Rahm. Do you think players need some close calls, a little bit of heartbreak to make them tougher?

Absolutely. I think that every player has them. I mean, look at Jordan Spieth. He’s one of the best players in the world, and he’s got them. He doesn’t have many, but he’s got a few. And I’m sure if you ask him, he’s gonna tell you it’s definitely helpful. I mean it sucks to lose, but when you’re in contention and up there, it’s fun. There’s nothing better in the world.

You took a little heat from Curtis Strange during the 2018 CareerBuilder for chatting with Rahm during the playoff. What do you think? Was it unfair criticism?

He can say what he wants. He’s obviously got a couple majors under his belt, so I don’t have the ability to tell him to f— off, like I wanted to. [LAUGHS] But it was a little unfair. We’re all competing. We’re all wanting to win. Just because he maybe is a little bit more fiery than I am or Jon Rahm is; I mean Jon and I are friends. We talked. Sorry. I feel like that was one of the best playoffs of the year. We went shot for shot for four holes. Yeah, I just thought that criticism was just B.S..

In general, is there too much buddy-buddyness on Tour?

What people have to understand is we’re a family. We’re all out here every single day all year. It’s not just ending in October, starting in January. We’re out here from January to January. Then some guys all live close together. I feel like back in the day on Tour people didn’t live in Jupiter and people didn’t live in all these centrally located spots where the weather’s good. People are getting to be buddy-buddy because they are truly friends. We’re all coming off college and junior golf together. I mean you look at Justin Thomas and Spieth, they’ve been together their whole lives, playing junior golf together. They played college golf against each other. It’s hard not to be buddy-buddy out here, you know? You can’t just be a jerk the whole time you’re out here or you won’t have any friends.