Most of the classic U.S. Open courses are closed-door venues, but not all. If you’re seeking a U.S. Open experience of your own, here are the six courses you can play that have embraced our national championship.

In 2011, Jack Nicklaus told GOLF Magazine, “I fell in love with Pebble Beach the moment I set foot there to prepare for the 1961 U.S. Amateur.” It’s easy to see why Nicklaus feels that way. Golf has many seaside courses that make your heart beat faster, but not one that offers what Pebble Beach has, from the cliff-top setting above the Pacific Ocean to the tiny greens that place a premium on shotmaking. There isn’t a more thrilling, spectacular stretch that exists anywhere than holes 6 through 10 and the par-5 18th stands nearly alone as the premier finishing hole in golf. Nevertheless, it’s the 209-yard, par-3 17th that shines most in Pebble U.S. Open lore. Nicklaus’ masterly 1-iron that clanked the flagstick in 1972, leaving him a tournament-clinching, kick-in birdie and Tom Watson’s chip-in from thick greenside rough to cement his 1982 victory are among the greatest shots in major championship history. Unforgettable, too is Tiger Woods’ utter domination in 2000, winning by 15 shots, at 12-under-par. 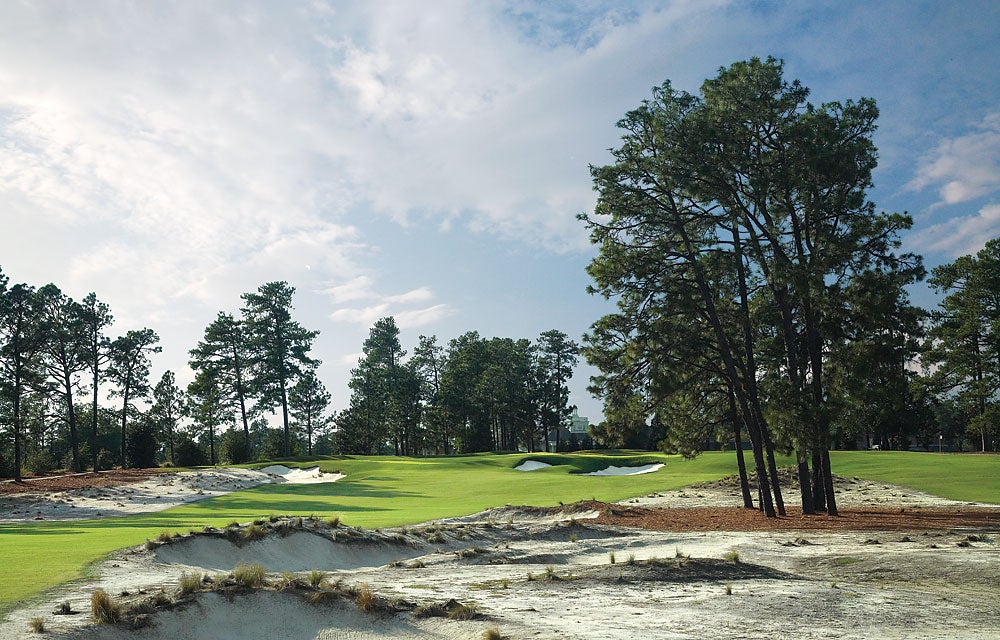 Donald Ross’ finest creation looks harmless at first glance, with gently rolling fairways ribboning through towering —though not suffocating — longleaf pines. Accuracy is a must, however, as sandy scrub and wispy love grass awaits wayward drives. This is especially true since 2011, when Bill Coore and Ben Crenshaw restored the look and strategies Ross created with a daring, hugely successful makeover. Still in place are the most exacting approaches in golf, to the fiendishly crowned greens, which can reduce even the most skilled chipper to a quivering jello blob. New Zealander Michael Campbell was a surprise, if deserving winner in 2005, and Martin Kaymer romped to an eight-stroke victory in 2014, but the 1999 U.S. Open lingers longer with most, thanks to a Hall-of-Fame leaderboard and to Payne Stewart’s 20-foot slam-dunk par putt on the 72nd hole to edge father-to-be Phil Mickelson by one. The U.S. Open returns to Pinehurst No. 2 in 2024. 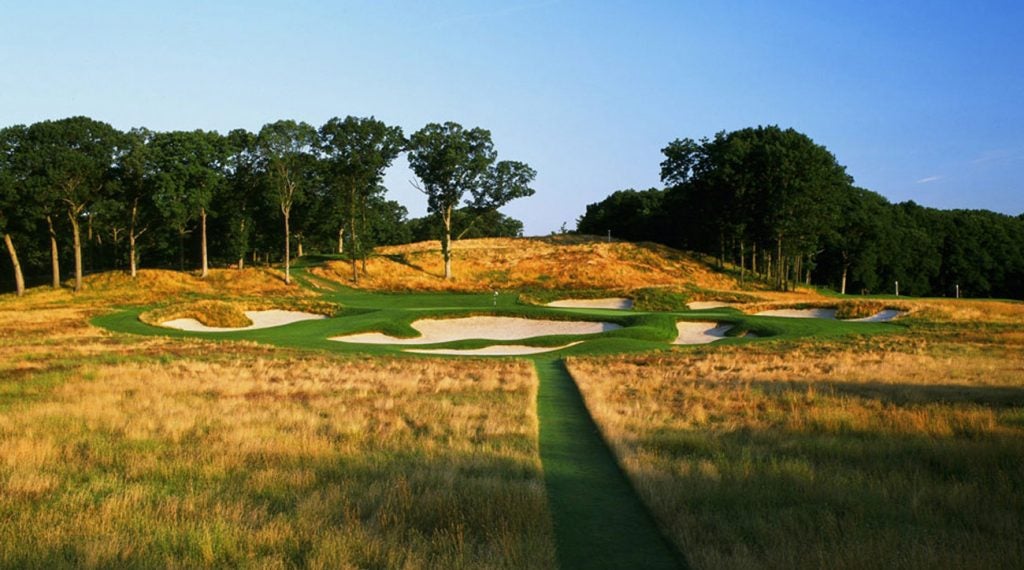 All you really need to know about Bethpage Black’s off-the-charts challenge is printed on a sign behind the first tee: WARNING—THE BLACK COURSE IS AN EXTREMELY DIFFICULT GOLF COURSE WHICH IS RECOMMENDED ONLY FOR HIGHLY SKILLED GOLFERS. Tiger Woods, the only golfer skilled enough to break par for 72 holes at the 2002 U.S. Open, summed up thusly: “The golf course was hard.” Rees Jones put his own restorative stamp on this 1936 A.W. Tillinghast design, re-transforming the Black into a fearsome, walking-only test of manhood, with gargantuan, uphill par-4s, wrist-fracturing rough and bunkers as large as some European countries. Lucas Glover was the unexpected champ at the rainy 2009 event.

Tournaments
PHOTOS: The 10 greatest U.S. Open moments of all time 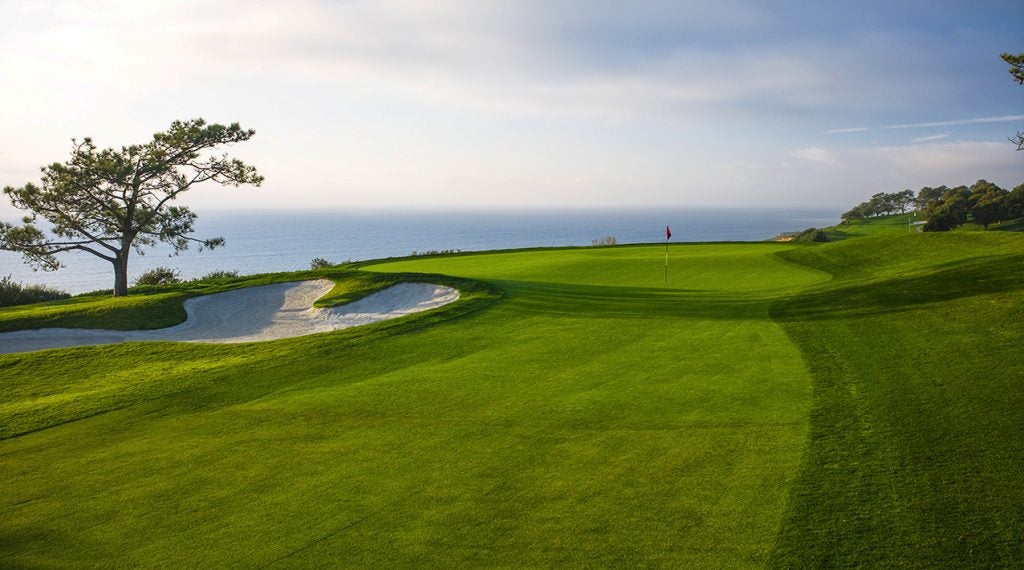 Torrey Pines didn’t need any more notoriety when it came time to playing host to the 2008 U.S. Open. The cliff-top, city-of-San Diego-owned venue overlooking the Pacific Ocean that stretches 7,600-plus yards had already witnessed 40 years of PGA Tour events, with winners that included Jack Nicklaus, Tom Watson and Phil Mickelson. Leave it to Tiger Woods, however, to enhance Torrey’s reputation for tournament drama. Hobbling on what was determined later to be a broken leg, Tiger jarred a clutch 12-foot birdie putt at the par-5 72nd hole, then beat Rocco Mediate in an 18-hole playoff to make the ’08 Open one of the most memorable ever. 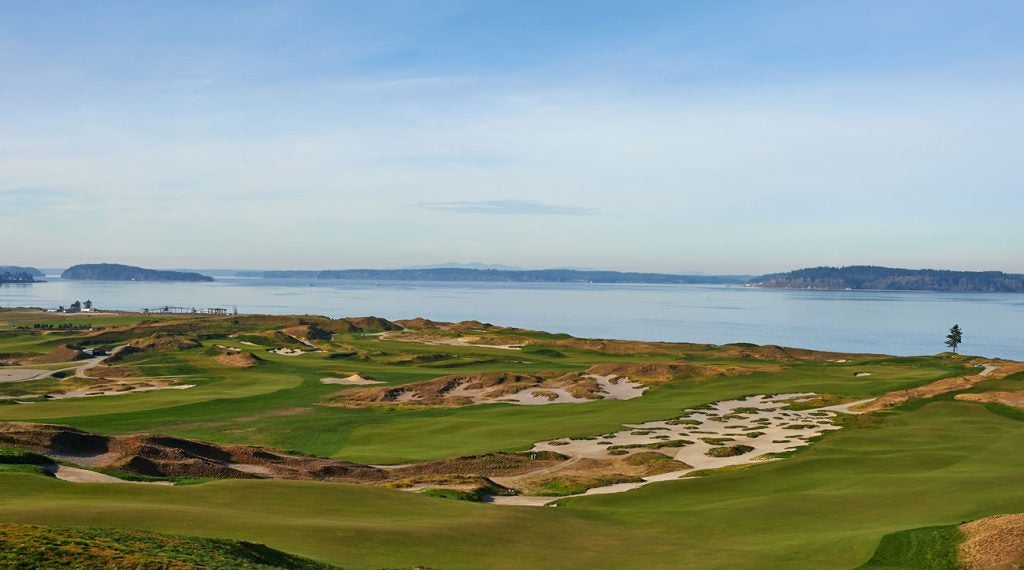 This brawny seaside test hosted one of the more controversial U.S. Opens in recent years, where semi-unputtable greens somehow yielded to late heroics from Jordan Spieth, who outdueled Dustin Johnson after the birdieing the 72nd hole, a triumph only achieved when Johnson three-putted the same hole minutes later. Also home to the 2009 U.S. Amateur, won by Peter Uihlein, this 7,695-yard, walking-only, Robert Trent Jones II design unfolds atop an old gravel mine at the southeast tip of the Puget Sound, 45 minutes south of Seattle. The eye candy commences at the first hole, a 498-yard par-4 that shares a fairway with the 18th, a la the Old Course at St. Andrews. A firm, fast fairway, a 50-foot dune to the right and the backdrop of the Sound set the early tone. From there, this municipally-owned spread just gets better. 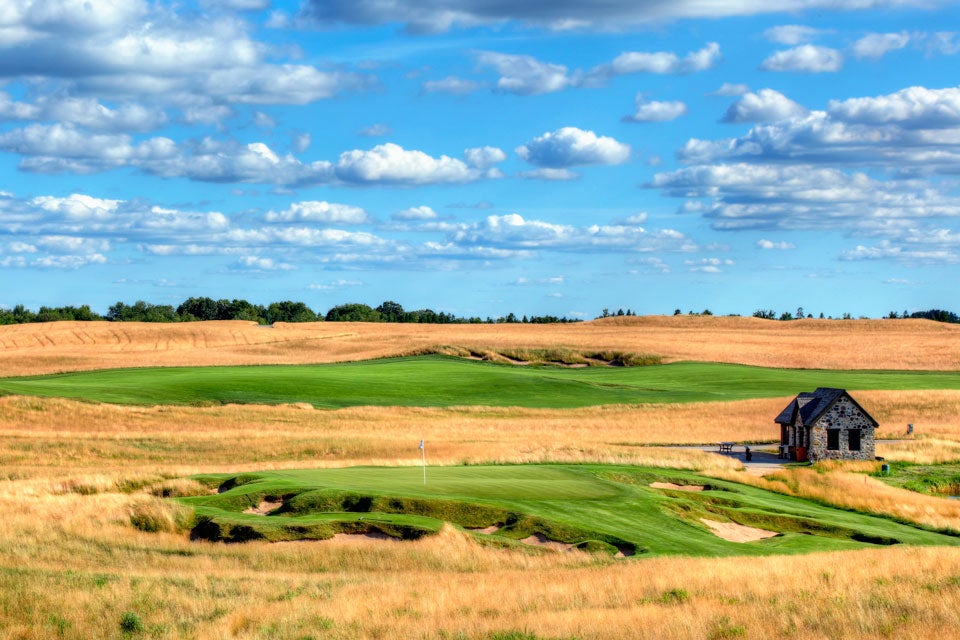 Situated 35 miles northwest of Milwaukee, Erin Hills occupies a massive, topsy-turvy spread of ridges, dunes and fescue grasses, lending an Ireland-in-the-Heartland ambiance, but no Emerald Isle course stretches to 8000-plus yards, as this one does. Designed by Michael Hurdzan, Dana Fry and Ron Whitten, Erin Hills controversially was chosen to host the 2017 U.S. Open before it had fully established itself. Yet, it proved worthy as host to the 2008 U.S. Women’s Public Links event, and again at the 2011 U.S. Amateur, when Kelly Kraft upset Patrick Cantlay in the final. A few ill-advised design changes by the original owner have now been reversed and today, Erin Hills boasts a formidable test of modern links-style shotmaking, with contour, angles, varied green sites and Old World bunkering the hallmarks.