Tiger Woods won the 2019 Masters, but here’s who lost it—plus their level of heartbreak

AUGUSTA, Ga. — Let us take nothing away from the majesty that was Tiger Woods’ Sunday victory. But we’d be remiss to ignore those that fell just short. After all, every golf tournament has far more losers than winners. How bad should Woods’ competitors feel?

There were so many players in the mix on the back nine that it makes sense to comb through each of their respective chances to win — and how those chances slipped away. Here’s each player that could have won the 2019 Masters, and on a scale from 1 (gentle brush with the lead) to 10 (going full Roberto D. Vicenzo). In the end, they all fell victim to Tiger Woods. Some even seemed to like it. Let’s get started.

When he might have won: Standing on the 18th tee at 12 under, D.J. knew he needed birdie. He had a chance to hit that signature bullet-cut driver and have wedge left to that vulnerable front left pin position.

The moment he lost: When Johnson’s tee shot just snuck into the left bunker,

The moment he lost: The very next hole, when Cantlay stuck his tee shot high and right, on the wrong side of the ridge on No. 16. One three-putt later, Cantlay’s chances were all but done. Another bogey at 17 was the final nail in the coffin en route to a T9. 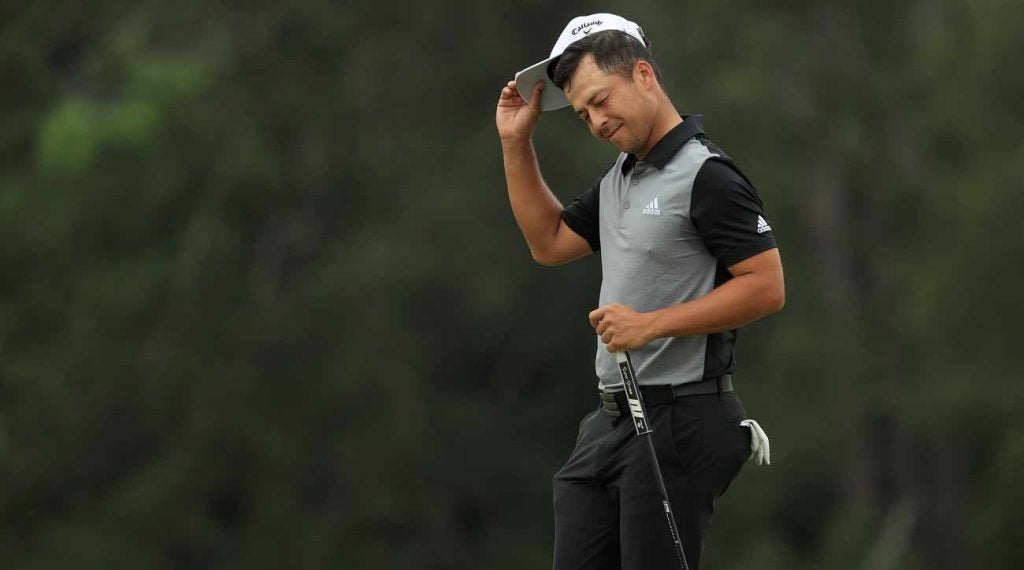 Xander Schauffele held the Masters lead on No. 14, but couldn't quite close.
Getty Images

When he might have won: Schauffele stepped up to the 15th tee on Sunday at 12 under par and in a share of the Masters lead. No. 15 was averaging 4.64 strokes for the day and had yielded 31 bogeys against just 20 pars. Opportunity, thy name was Xander.

The moment he lost: It wasn’t until Schauffele hit his second shot at 18 that his tournament hopes were done with. “Chunked it,” Schauffele said from the fairway bunker. Credit to him for saving par.

How bad was it? 3 out of 10. This had much more to do with opportunities missed than mistakes made. Sure, 15 and 16 were prime chances on Sunday. But Schauffele seemed delighted to have lost to Woods. “It’s hard to really feel bad about how I played, just because, you know, I just witnessed history,” he said.

When he might have won: Tony Finau stepped to the 12th tee with a chance to tie for the lead; Francesco Molinari was up three at 13 under, but his ball was in Rae’s Creek.
“We had the door open on 12. That was the change of the tournament. Francesco hit it in the water. I knew I just needed to hit it on land.”

The moment he lost: Just seconds later. Finau said he knew as the ball was still in the air that it wasn’t going to stay on dry land. “Tiger hit the green, I didn’t,” he said. “And he took that two shot lead on me all the way through coming in.”

How bad was it? 4 out of 10. A bad swing in a big spot, sure—and missing your chance from the final group hurts. But Finau hardly had the Masters in his grasp. Finau never really got closer than the two-shot deficit he started the day with. Good on him, though, for owning the moment afterwards; he acknowledged where he fell short and never stopped fighting even as he got to 18. “That could have cost me my first major,” he said. “But it is what it is.” 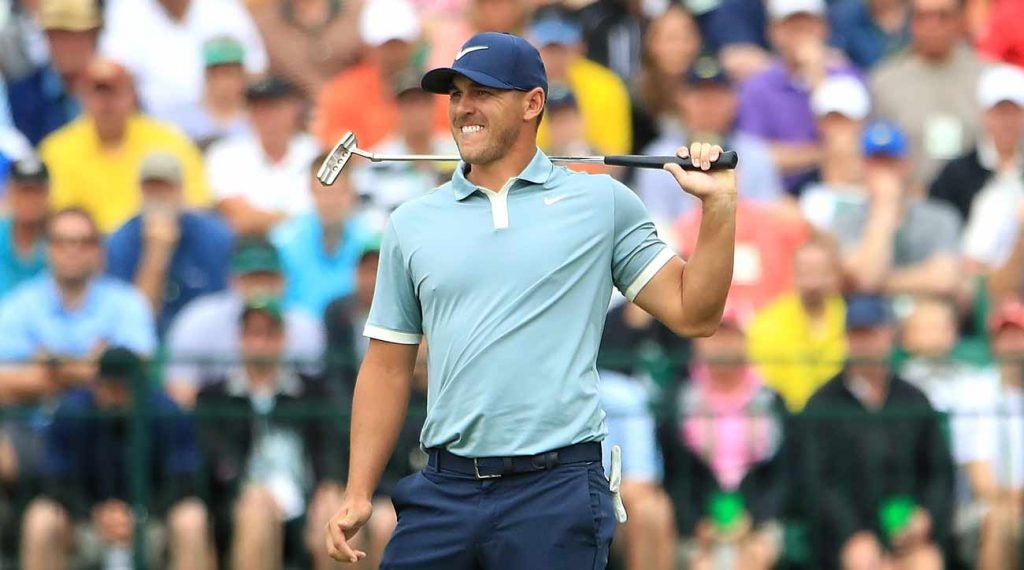 Brooks Koepka was in contention until his final putt at the Masters.

The moment he lost: Technically it was when that birdie putt slipped past the hole on 18, but really it was that miscalculated iron shot that ended up in Rae’s Creek on 12. He needed an eagle at 13 just to get those two shots back; that proved too big a deficit to overcome.

How bad was it? 5 out of 10. Koepka owned a share of the lead on the back nine on Sunday; for him to miss opportunities at 17 and 18 will stick with him. Still, this was an eloquent Koepka. I mean, have you ever heard the guy like this?

“That was probably the coolest back nine in a major championship I’ve ever been a part of, or just in golf in general. I think with so many guys going up and down, the lead’s kind of changing hands, depending what hole you’re on.

“I don’t know how it looked on TV, but it was amazing to be a part of. It was quite fun. And I mean, I watch the leaderboard all the time to see where guys are at and what they are doing, and to see Tiger, what he did down the stretch was impressive. And we already knew he was back, but I think he put the exclamation point on it.” 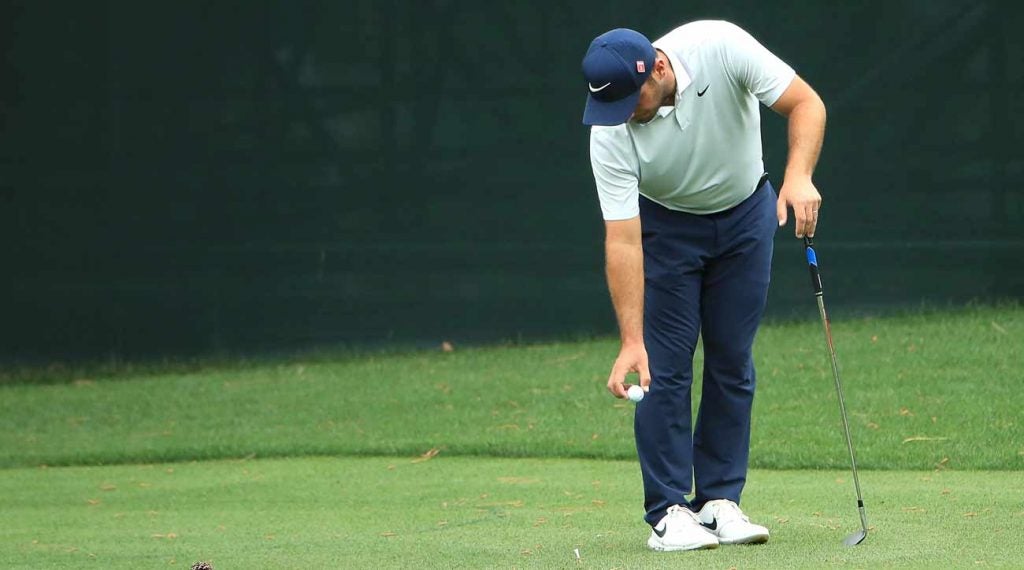 Francesco Molinari had two big-time miscues down the stretch that cost him a chance at the 2019 Masters.

When he might have won: For a while, Francesco Molinari’s demeanor, his putting stroke and his ability to fix any mistake felt like a steady climb towards inevitable victory and reminded viewers that eventually, the machines will overtake us all.

The moment he lost: A slight tear in the fabric of the universe came at No. 12, where the wind swirls and confounds the mind and body. Molinari said afterwards that his error was executional; in his words, “I think we picked the right shot and just didn’t hit it hard enough, as simple as that.” Still, that was only enough to give up his two-shot lead. The dagger came at 15, where Woods found the green in two and Molanari found it in six due to a tree branch/pond duo.

How bad was it? 7 out of 10. It wasn’t good! The back nine is supposed to yield fireworks, but all Molinari could find was heartbreak and double bogeys.

In the end, we were all winners. You could hear it in the post-round remarks: Koepka, Molinari, Fowler and Schauffele were among those who expressed their gratitude just to be there for Woods’ final re-arrival. Now that he’s won, there’s only one option: Dethroning him once again.