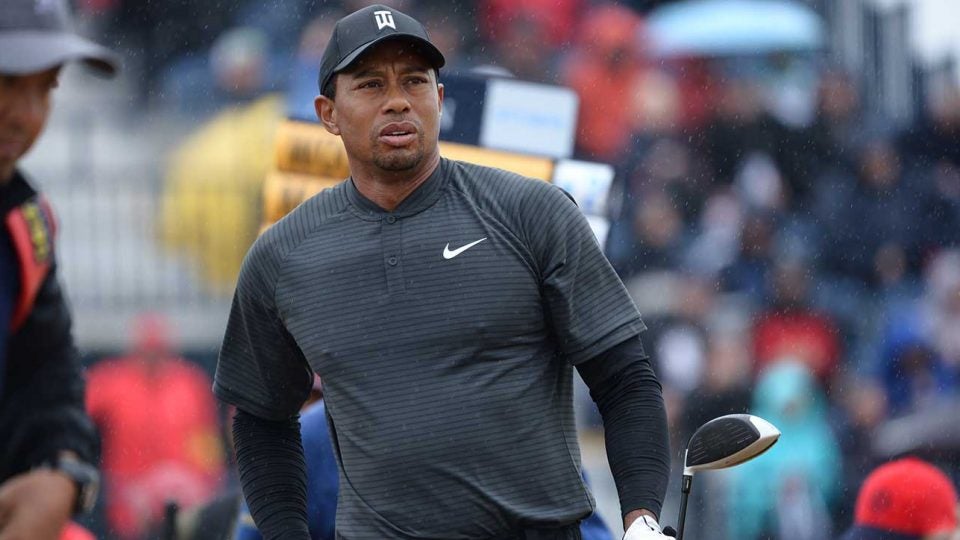 Can Tiger Woods make up ground at the British Open?
Angus Murray

GOLF.com conducts a weekly roundtable with its staff to break down the game’s hottest topics. And since it’s British Open week, we are answering one burning question each night. Check back for the unfiltered opinions of our writers and editors and join the conversation by tweeting us @golf_com.

Tiger Woods is six off the lead and playing the weekend at a British Open for the first time since 2014. But after two even-par rounds of 71, is his game sharp enough to catch the leaders?

Sean Zak: Nope. His putter is too dicey from the 5-8 feet range. Maybe part of that is these greens, but I think it’s just him.

Jessica Marksbury: The field needs to come back to him by about three shots in order for Tiger to even think about contending. At this point, making up even two or three shots (at a minimum) seems like a big ask when he has yet to shoot a round under par.

Alan Shipnuck: I disagree slightly with Bamberger — Tiger’s lack of confidence with the driver has left him playing very defensively off the tee, leaving long approaches. As good as Tiger is with his long irons, it’s hard to beat the best players when you’re swinging a five-iron and they have a nine.

Jeff Ritter: He’ll probably need something like a 65 or 66 on Saturday to get into contention. I don’t think his game is sharp enough right now to get that done.

Joe Passov: I’ll glumly agree with the masses here. He’s still struggling with his speed on the greens too much to win. His ball-striking and course management savvy could get him back in the hunt — but no further.

Dylan Dethier: I think we could see a switch flip tomorrow, as we have all year with Woods. Remember: Tiger leads the entire PGA Tour in Saturday scoring this year. Shipnuck’s right that if he’s not going to execute his conservative game plan to perfection, he needs to be more aggressive off the tee. I think Woods has a good score coming tomorrow; the biggest problem is just how many good players are between him and the top of the leaderboard.

Josh Sens: If you take the sum of our comments, I think we can all agree: Tiger’s comeback has been impressive, but he’s not what he once was, and neither are the fields he’s up against. As much as he’s overcome in the way of injuries, making his way back into the winner’s circle at a major is an even longer ask. It’s certainly not going to happen this week.