Tour Confidential Daily: What’s been the biggest surprise at the midway point of the Masters? 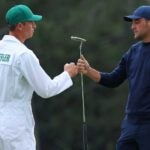 Scottie Scheffler and his caddie, Ted Scott, on Friday after Scheffler's second round at the Masters.

Scottie Scheffler is wayyyy out in front, Jordan Spieth is heading home and Tiger Woods has two more rounds of golf to play this weekend. What’s been the biggest surprise through 36 holes of the Masters?

Alan Bastable, executive editor (@alan_bastable): Not a single eagle at 15! For shame! One of the game’s most thrilling holes has been neutered by a new tee box and stiff crosswinds. It’s a real bummer and a real surprise. I didn’t see 10-15 extra yards having such a significant impact. Here’s hoping they push up the tees over the weekend. It’s time to bring back the roars!

Jessica Marksbury, multimedia editor (@jess_marksbury): Gonna go outside the box a bit and select Jon Rahm as my biggest surprise this week. He hasn’t finished outside the top nine in his last four starts at Augusta, and I gotta say, I expected more from him than a 10-shot deficit at the tournament’s halfway point.There is, however, plenty of golf to be played, so perhaps I should suspend my judgment for at least one more round.

Luke Kerr-Dineen, Game Improvement Editor (@lukekerrdineen): It makes sense that Scottie Scheffler is playing well. He’s the World No. 1 with three wins in his last five starts. But I didn’t quite expect him to lock down the field in the manner he’s currently doing. Every player, to a man, came off the course racked by the wind. Scottie shot 67 in the worst of it. He’s making it look easy, and showing no signs of slowing down.

Dylan Dethier, senior writer (@dylan_dethier): Jordan Spieth’s MC! Entering this year’s Masters Spieth had played the tournament eight times, made eight cuts and finished inside the top three five times. He sounded confident in his pre-tournament press conference, too. But it all came unraveled at No. 12, where Spieth hit two in the water and made 6. Needing par at No. 18 to guarantee a made cut (and bogey to have a shot) Spieth made double bogey instead.