Tiger Woods is back on the injured reserve list. The 43-year-old announced Monday he has withdrawn from this week’s Arnold Palmer Invitational with a neck strain.

Woods made sure to clarify — on Twitter — that this injury is not related to his oft-injured lower back, and that he has no long-term concerns. He also noted that he is hopeful to return next week at the Players Championship at TPC Sawgrass.

It is not clear what contributed to Woods’s neck strain, but he did not play last week at the Honda Classic in his hometown of Jupiter, Fla. Recall that just last year at the British Open, Woods wore KT Tape on his neck after waking up with a stiff neck. 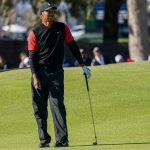 You may also like #AskAlan: Is Tiger Woods’s conditioning a cause for concern?

Woods said this neck strain is something he’s been dealing with for weeks, and while he’s been receiving treatment for it, it “hasn’t improved enough to play.” He played back-to-back weeks at the Genesis Open and the WGC-Mexico, finishing in the top 20 each time, before sitting out the Honda Classic.

The 14-time major winner also apologized to the Palmer family, calling the event one of his favorite tournaments. Woods has won the Bay Hill event eight times and nearly added a ninth title last year.

Woods has a long sheet of injuries he has battled, most of them coming in the last 10 years. His return to winning form last season followed four back surgeries that he has had since September 2014.