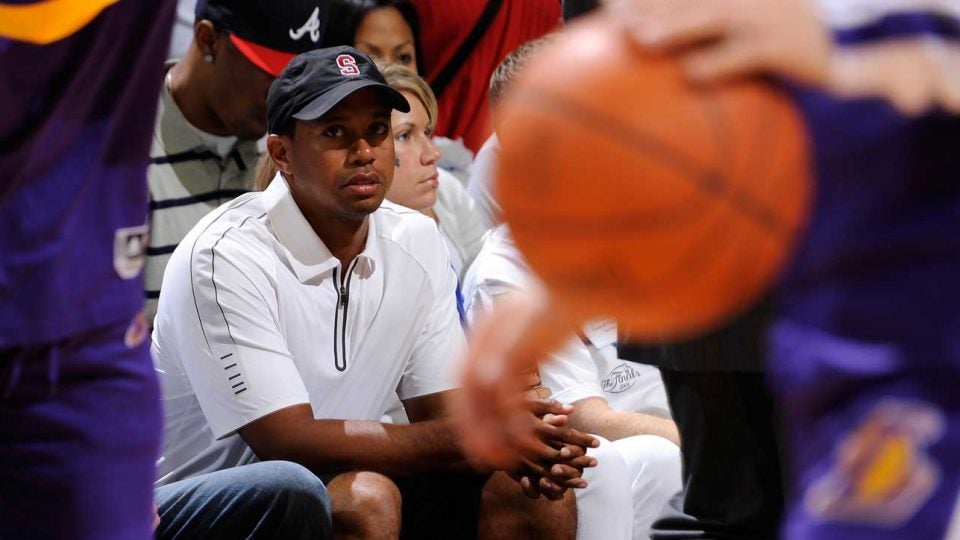 Tiger Woods sits courtside at a 2009 NBA Finals game between the Orlando Magic and the LA Lakers.
Getty Images

Tiger Woods is a phenomenal golfer, but apparently his athletic brilliance does not extend to the basketball court.

Notah Begay, Woods’ longtime friend and former teammate at Stanford, made that much clear when he joined the GOLF.com Podcast this week. Begay led Albequerque Academy to back-to-back state high school championships on the hardwood in New Mexico, and helped create an intramural squad for the golf team at Stanford. Woods was on that team, too, but he couldn’t crack the starting lineup.

“The golf team had an intramural team at Stanford,” Begay said. “Tiger was on our team, but let me just tell you — let the cat out of the bag — he wasn’t in the starting five. I’m not going to disparage his athletic ability because he’s a great athlete. But I mean, with the likes of Casey Martin, who had a birth defect in his right leg who started ahead of [Tiger], will give you an indication of Tiger’s skills on the court. I’ll just leave it at that. [laughs]”

Turns out Tiger’s athletic prowess doesn’t carry over onto the hardwood ?. Notah Begay joins @sean_zak on the latest GOLF podcast to dish on being college teammates with Tiger and breakdown the Koepka era in golf. Link in bio to listen! ?

Fair enough. On Stanford’s Men’s Golf intramural basketball squad, Tiger Woods was left on the bench. Perhaps he was a great sixth man, jumping into the game with all the energy in the world. Perhaps he was a solid three-and-D specialist. Or perhaps he just wasn’t cut out for the hardwood. Until we ask Tiger, we’ll never know.

Begay was quite an athlete himself, starring in golf, basketball and soccer in high school. He has noted in the past that the only reason he received a golf scholarship was because of his hustle on the basketball court. He admitted that he’s a good shooter and a slave to the gym. Begay loved to practice, which translated well to the golf course.

In addition to discussing Woods’ basketball prowess, Begay shared a story about the moment he knew Woods was just a flat-out better golfer than him. He realized it down in Orlando, on a day in which he beat Woods. Check out that story and more in the podcast below. Subscribe to the GOLF.com Podcast on iTunes by clicking here.