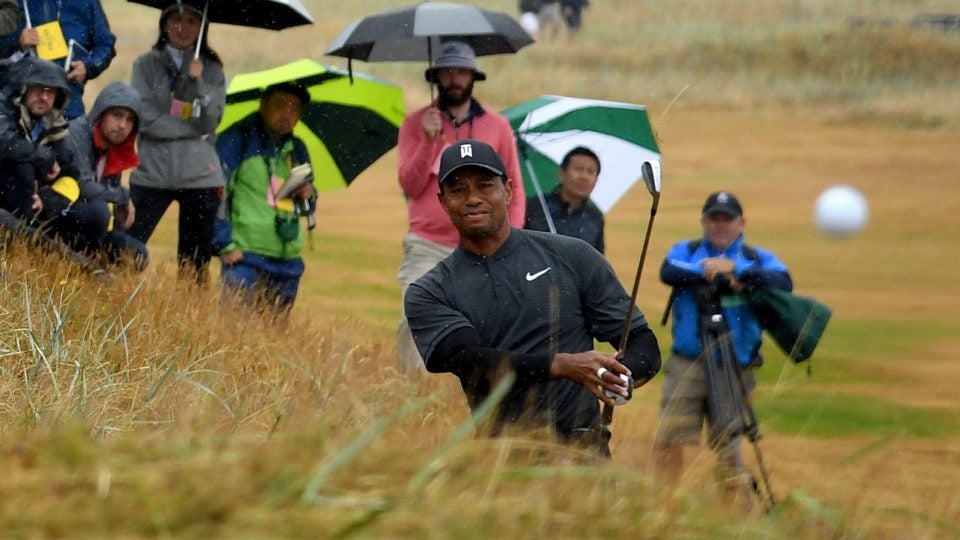 Tiger Woods backed up his opening round of even par with a second-round score to match on Friday morning, notching four birdies against four bogeys for a second consecutive 71 at the British Open. On a cool, wet morning that put traditional Open weather on display, Woods stuck to a conservative game plan, hitting largely irons off the tees and often playing his approach shots from well back in the fairway as he managed his way around Carnoustie.

Woods’s execution was lacking early on as his tee shot at the par-4 2nd hole wandered down the right toward the large crowd following Woods, Hideki Matsuyama and Russell Knox. Trying to hack from a thick lie, his next shot put several spectators in harm’s way:

Hey, uh guys, you may want to move back a little more  #TheOpen pic.twitter.com/b28vEndIuB

Woods went on to bogey No. 2 and added a sloppy three-putt bogey at No. 3, suddenly landing dangerously close to the cut line. But it didn’t take long to bounce back: Woods rolled in this birdie putt at No. 4.

First birdie of the day for @TigerWoods

Then he added this lengthy putt birdie at No. 5 to make it two in a row and return to even par.

Grinding. 3rd birdie of the day gets Tiger back to Even. #TheOpen Live Stream: https://t.co/21NLQM5k0e pic.twitter.com/It6vh2XQRi

After rolling in a 15-footer to save par at No. 13, Woods smoked a long iron down the short par-5 14th hole. Another long iron approach set up this eagle effort, and the tap-in birdie that followed sent him into red figures for the first time all day.

Tiger in the  #TheOpen pic.twitter.com/LydvBt1Cz3

Woods failed to save his par at the difficult par-3 16th, returning once again to even par. But at No. 18, a towering six-iron approach left him with just inside seven feet for a birdie to jump to red figures entering the weekend. But tentative speed allowed the putt to fall off to the low side, forcing the three-time British Open champion to settle for another round of even par. Woods sat in a tie for 27th at the time he finished.