Shadow Creek Golf Club in Las Vegas is notorious for its secrecy. But for the blockbuster Tiger Woods vs. Phil Mickelson showdown, viewers will be able to get a first-hand look at the action — for a price.

WarnerMedia announced in a release that Turner Sports will produce the highly-anticipated event and will distribute it through pay-per-view as well as through a premium streaming service. “The Match” will be available live on television, through streaming services and then later through produced shows and highlight packages. Mickelson and Woods will square off on Thanksgiving weekend, although organizers have not announced the event’s exact date and time. 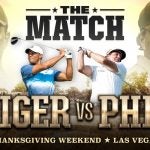 You may also like ‘It’s on’: Tiger Woods, Phil Mickelson confirm match for Thanksgiving weekend

Live pay-per-view coverage will air via DirecTV and streamed through B/R Live and AT&T U-verse. HBO Sports and its 24/7 reality franchise will document the leadup to the match. Bleacher Report and its “House of Highlights” will offer comprehensive highlights and behind-the-scenes content. TNT will also televise select portions of the showdown in the weeks following the live competition. Turner International will also handle streaming outside the U.S.

A WarnerMedia release confirmed that the two would play for $9 million, while also teasing the possibility of some in-game wagers. “As part of the live event, both Woods and Mickelson will selectively make side-challenges against one another during the match. For instance, Woods or Mickelson could raise the stakes by challenging the other to a long-drive, closest-to-the-pin or similar competition during a hole as they play their match, with money being donated to the winning golfer’s charity of choice,” the release said.

Pay-per-view pricing for the event is not available yet and will be announced closer to the event.