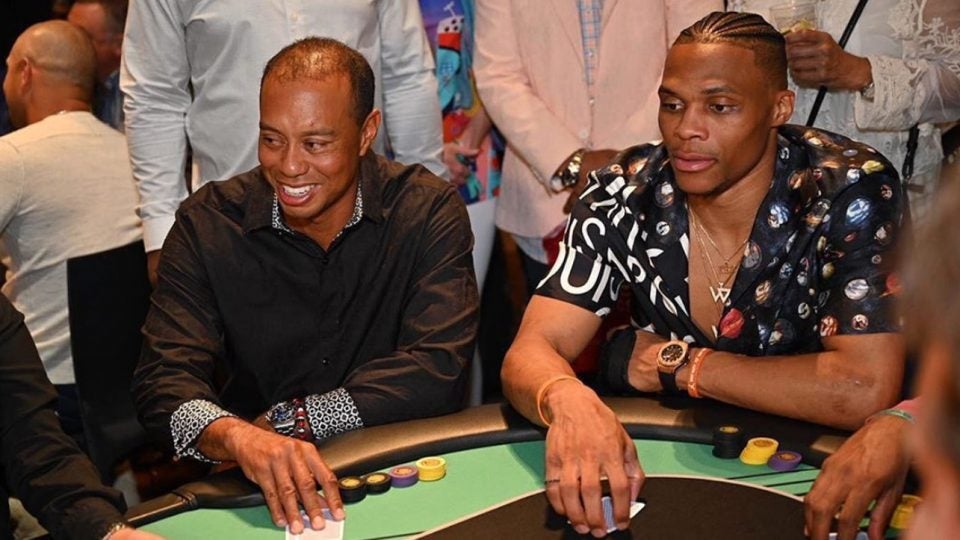 Just about any avid poker player knows the terrible feeling of losing a hand after he or she goes all-in, confident that theirs is the best of the bunch. Rest assured, someone else feels your pain: Tiger Woods.

The 15-time major champion is hosting his annual Tiger Jam event in Las Vegas this weekend to raise money for charity and have some fun too. The event raises money for Woods’ TGR Foundation, which helps expand educational resources and makes going to school more accessible for underserved students.

Being that it’s hosted in Sin City, there’s plenty of poker that gets played among the celebrities who attend Tiger Jam. Which includes Tiger, who found himself in a high-stakes duel at the poker table at the MGM Grand on Friday night against NBA star Russell Westbrook.

Both Tiger and Westbrook went all-in with their hands, feeling good that each had the better set of cards over the other. While Tiger had ace-king, Westbrook had a pair of queens. When the dealer turned over the cards, it seemed at first as if things were breaking Tiger’s way. He even let out a premature victory celebration. Until the cards suddenly didn’t break his way.

The dealer flipped over three cards to reveal an ace on top of the stack, giving Tiger the advantage for a brief moment. But the dealer then spread the cards out to reveal a queen, giving Westbrook three-of-a-kind. Westbrook’s three-of-a-kind beat Tiger’s top pair, thus eliminating Woods and giving Russ the victory. Or, more importantly, the pot.

Watch the drama unfold for yourself here, including Tiger’s reaction when the queen appears:

The two superstar athletes dapped each other up after the competition, just as if they had been going at it on the golf course or basketball court. Both are no strangers to the high stakes pressure of winning and losing in professional sports, which Tiger and Russ both showed in shaking hands and hugging after the showdown concluded.

While Westbrook is in full offseason mode now after his Oklahoma City Thunder were bounced from the NBA playoffs last month, Tiger returns to the high-intensity competition of golf this coming week at the Memorial Tournament. The Memorial, which is held annually at Muirfield Village in Dublin, Ohio, is Tiger’s first appearance on Tour since he failed to make the cut at the PGA Championship earlier this month.

Of course, Tiger is looking for his first win since the Masters in April. But it could come this week, as Tiger has won the Memorial five times in his career.