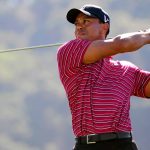 On this week's episode of GOLF's Subpar, Bryce Molder talks about how a bizarre Tiger Woods incident overshadowed his first PGA Tour win.

Everyone in golf knows about the “Tiger effect.” The gravity Tiger Woods possesses elevates the entire game. Normally, this is a good thing. But for one first-time Tour winner, the Tiger effect overshadowed his own moment in the spotlight.

As Bryce Molder explained on this week’s episode of GOLF’s Subpar, he earned his first (and only) PGA Tour victory at the 2011 Frys.com Open. With Woods in the field, the victory was even sweeter. But even though Molder took the title, Woods stole the show.

“Weirdly, on his third-to-last hole, someone ran on the green and threw a hot dog at him,” Modler said. “That’s what ended up in the USA Today. I remember looking at it and thinking, ‘This is so great.’”

Fortunately, Molder took it in stride. Perhaps because he bested the now 15-time major winner and claimed his coveted first Tour win.

“He had like three paragraphs, and I had this little snippet about a six-hole playoff,” Molder said. “It was so perfect … He probably had it staged.”

Check out the entire episode of Subpar below, as Molder shares stories of a prank war with Matt Kuchar, the biggest difference between the pro and amateur game and more.

Check out our exclusive Subpar merch!

Get Amongst It T-Shirt (Kelly Green) – GOLF’s… Get Amongst It – Western Birch Limited Editio…