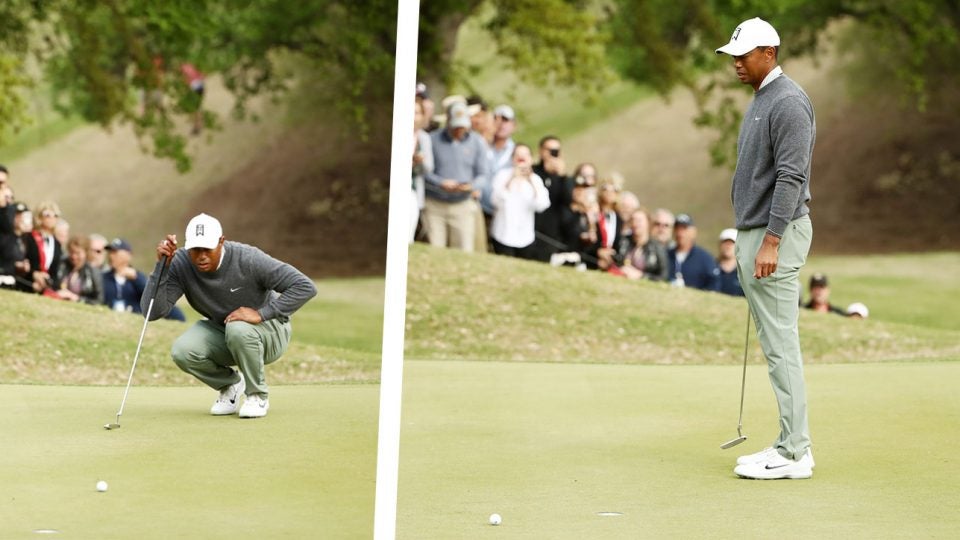 Tiger Woods had this 5-footer to send his match to a playoff. It rimmed out.
Getty Images

Forty-three-year-old Tiger Woods just finished the most-intense week of competitive golf in his post-fusion-surgery life. If you ask him, it probably should have lasted one more day.

Woods beat Aaron Wise and Patrick Cantlay during the round robin session of the WGC Match Play earlier this week, offsetting his loss to Brandt Snedeker. Then, he dispatched Rory McIlroy in a grinding match Saturday morning. You can live through that one play-by-play with our live blog here. What does that all earn you in Austin, Texas this week? Oh, just another match Saturday afternoon. Woods’s opponent, Lucas Bjerregaard, had just beaten Henrik Stenson 3&2 to advance to the Elite 8. Bjerregaard won the first hole at against Woods Saturday afternoon, too.

What followed next was an absolute grind for Woods. He battled back to win the third, fourth and fifth holes to go 2 up on the 27-year-old Dane.

But Bjerregaard would not crumble. Woods and Bjerregaard played eerily similar golf throughout the back nine. They halved holes 12, 13, 14 and 15 before Bjerregaard made eagle to Woods’s birdie on the par-5 16th. Then, from outside Tiger’s ball on the 17th green, Bjerregaard poured in a 13-foot birdie putt. Moments later, Tiger answered.

Match play at its finest. ?@LBjerregaard and @TigerWoods exchange birdies on No. 17.

The similarities didn’t stop there. On 18, both players hit eerily similar tee shots that bounded down the fairway, rolling into the rough around 50 yards from the green. Woods played first, electing for a high lofted approach that landed well short of the green and in the bunker. Learning from Woods’ swing, Bjerregaard also hit the green, his ball rolling out to 16 feet — leaving him a very makable putt to beat Tiger Woods.

What seemed like a potential seven matches for Woods in the WGC ended with five. In the final match, Woods made seven birdies to Bjerregaard’s five, plus one eagle. Speaking after the round, Woods admitted the missed putt came from a bad read by him and his caddie Joe LaCava.

It was still a successful event for Woods, who has long held himself to a win-or-else standard in his career. His next tournament is a far more important one. Woods will arrive at Augusta National in just nine days to make his 22nd Masters start.