Jonathan Wall, GOLF.com’s equipment editor, had the opportunity to sit down and talk gear with 14-time major winner Tiger Woods during the WGC-Dell Technologies Match Play. Here are five things Wall learned from the conversation.

1. He’s Uber-sensitive when it comes to equipment

Back in 2017, I had the opportunity to observe Woods go through his first official fitting with TaylorMade Tour reps in Florida. Needless to say, it was an eye-opening experience that left me floored at how particular Woods is with his gear. His sensitivity to even the slightest club change can take a driver from the test pile to the trash heap in a matter of seconds.

For example, it only took Woods one swing with a new prototype iron to realize something was amiss with the center of gravity location. And he passed on hitting a driver during testing because he felt a small bubble in the grip.

Few players are able to discern the subtle nuances Woods picks up on, like the head material or grooves being part of the issue — he admitted the ball was going too far — during iron testing. Woods’ hypersensitivity when it comes to gear is on another level.

Before switching to TaylorMade, Tiger Woods had no idea how adjustable drivers worked. Weekend golfers can relate. Many golfers have a driver with some form of adjustability — be it the ability to alter face angle, launch, spin or all three at the same time — but when it comes to understanding the benefits of a weight shift or twist of the wrench, a large majority are still in the dark.

Woods was one of the last to switch from steel to graphite in his driver and still had a thing for glued, non-adjustable metalwoods up until Nike’s exit from the hard-goods industry.

When you’ve spent your entire career using a non-adjustable head, you reach out for help. In Woods’ case, he had Dustin Johnson, Rory McIlroy and Jason Day on speed dial to fully comprehend the benefits of an adjustable driver. Must be nice.

“I had to learn a lot [about adjustable drivers],” Woods said. “I either talked to the players that we have – like DJ, Rory. They were instrumental in helping me understand that. And then, working with Keith, trying to understand the time that I had a glued hosel to what we have now. So that was a bit of an adjustment, but I was able to make it.”

Even the greatest golfer of the modern era can use an assist from time to time.

And for someone who’s trying to maintain his back and play a full tournament load, adjustable metalwoods have made things oh-so-much easier for Woods during the testing process. Back when he was still using glued hosels, Woods said it was common to go through 50 drivers, hitting each one “three times or so” before paring down the potential suitors.

“Then we re-test them again,” Woods said. “That takes two days and I’m so friggin’ tired.”

Since going to an adjustable head, Woods noted the process to find a new driver takes about 20 minutes.

Woods’ body has to be ecstatic with the new testing process. 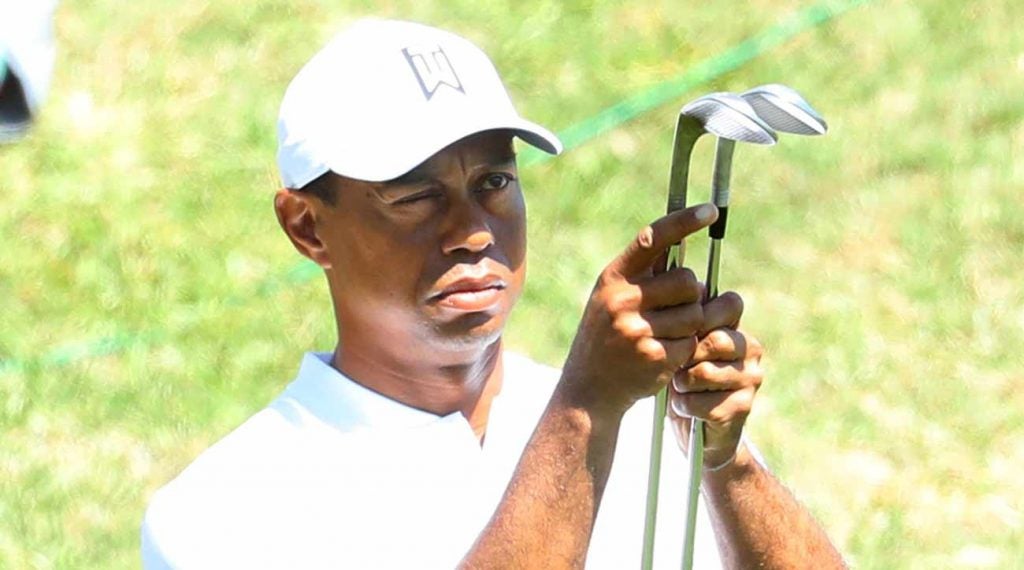 Tiger Woods is meticulous when it comes to dialing in his clubs.
Getty Images

3. Tiger used to blow through wedges

Woods’ short game creativity is a highly underrated aspect of his game. Some of the shots he’s been able to execute have come as a result of hundreds of hours on the chipping green. When you’re using raw, forged wedges, it’s a heck of a lot easier to wear out the grooves in a matter of months due to the softer head material.

It’s not uncommon for a tour player to go through a set of wedges every three to six months, but in Woods’ case, he wouldn’t pull the worn wedges out of the rotation as most pros tend to do. Instead, he got them “re-blasted” to renew the spin characteristics, before placing them in the back of the order to use one more time.

“Then I had the fresh ones, and I’d wear that one out,” Woods said. “Then that would get re-blasted, and eventually they’d come around and I used all eight sets twice.

“Then once those were done — so 16 go-arounds — now we have to start it all over again, because they can’t get anymore spin on them.”

Woods is using two different TaylorMade Milled Grind lob wedges this season, which surprised me somewhat given how little he changes equipment over the course of a season.

“One I used last year, and one I’ve been testing around a little this year a little bit because of the rough, and I’m trying to get a little more bounce out of the bunkers,” Woods said. “I have two different 60-degree wedges that I can play with.”

Given how meticulous Woods is with his wedge grinds, I didn’t think it was possible for him to have a secondary option based on the rough and bunker conditions. You learn something new every day.

5. Once he’s on site, don’t expect Tiger to tinker

Equipment testing during the early week is a common sight at every tour event. Just don’t expect Tiger Woods to be the one doing extensive work on the range with a bevy of shaft options. We’ve seen Woods test putters over the last year, but for the most part, the setup he brings to the course is what he plans to use for the tournament.

Similar to the way Brooks Koepka operates, Woods does almost all of his testing at home, out of the public eye.

“I’m one of the guys that don’t really change anything while I’m at a Tour site,” he said. “I do all my testing at home. Now, if you come to my house you’ll see that I’ve got clubs everywhere, and [I’m] testing, and I’ve got all different data. That’s different.”