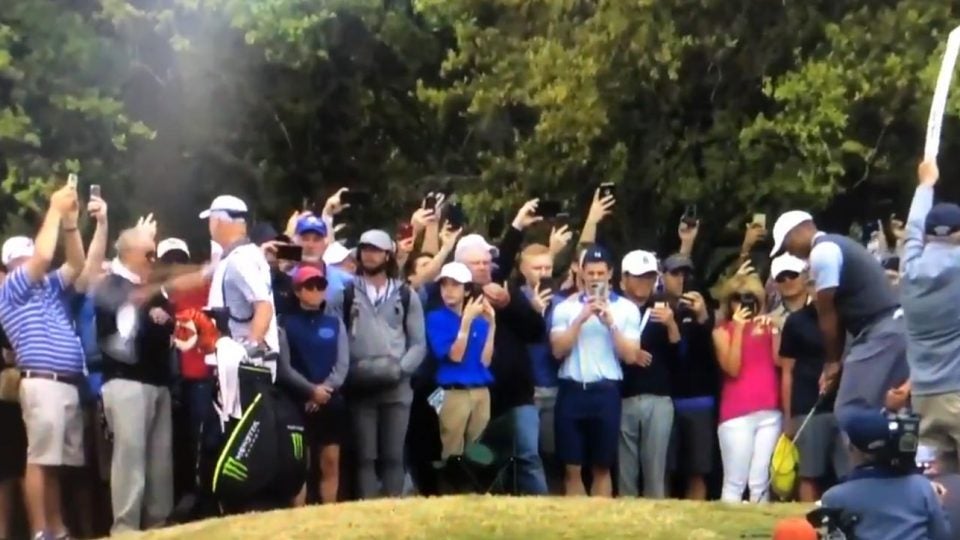 Tiger Woods' caddie Joe LaCava rips the hat off of a fan's head Friday at the WGC-Dell Technologies Match Play.
@mcrow99 on Twitter

If you’re Tiger Woods’ caddie, you have to deal with far more disruptions from fans than most caddies. Sometimes, the frustration gets to you.

That seems to be what happened on Friday at the WGC-Dell Technologies Match Play, where Tiger Woods’ caddie Joe LaCava ripped off the hat of an offending spectator for snapping a camera pic as Tiger prepared to hit a shot.

Early in his second round match against Patrick Cantlay, Woods sent his approach into the par-5 6th sailing wide left of the green into a large pack of spectators. The ball finished on a hump in some trampled down grass, setting up a tricky chip for the 14-time major champion.

As if the shot wasn’t difficult enough, fans surrounded Tiger as he and LaCava decided what to do. As Tiger addressed the ball to make his chip, the spectators raised their phones to document the moment, a common sight on the PGA Tour these days. Most of the amateur videographers remained silent and rightly avoided causing any disruptions that could mess Tiger up.

One older gentleman, however, proved he needs to brush up on his tournament golf etiquette.

In a video posted on Twitter, the fan in question appears to take a photo as Tiger is about to hit (presumably with his phone unmuted). Unfortunately for him, he was standing right next to Tiger Woods’ caddie LaCava. LaCava turned and in one motion tore the hat off the man’s head. Check it out below.

As you can see in the video, as soon as LaCava rips the hat off his head, the fan immediately holds his hand up to acknowledge his offense, either out of sincere regret or embarrassment (or probably both). That regretful embarrassment will likely grow once he realizes a camera caught him in the act.

Fan behavior has been a hot topic in golf lately. Bubba Watson got into a shouting match with a fan on Day 1 of the Match Play. Rory McIlroy spoke out against unruly spectators on Tuesday. Ian Poulter revealed that fans hurled insults at his family during the Players Championship.

Woods has repeatedly dealt with disruption from tournament galleries in his career. During the Open Championship at Carnoustie last year, a fan shouted in Tiger’s backswing on the 18th tee, inspiring a vocal response from the 80-time Tour winner.

As for Friday’s incident, it certainly didn’t help Tiger on the 6th hole. His chip failed to reach the green, and he lost the hole to go one down to Cantlay.