Tiger will never be ‘back’ … and that’s OK; this 2018 version of Woods is in some ways just as good

PONTE VEDRA BEACH, Fla. — Tiger’s play at Honda, Bay Hill and Tampa should have told you that he is capable of playing world-class golf again. With his 65-69 weekend at the Players, he was shouting it.

Yes, on Saturday, and more so on Sunday, he did not finish. In tournament golf you have to start, you have to middle and you absolutely must finish — unless you have a Simpsonian lead. Woods didn’t do that, and that’s something that’s impossible to work on at home.

Still, what Woods did do was stunning, given where his game was in January, and where his physical self was on an awful and scary night almost one year ago.

Even if you don’t have Johnny Miller’s fine eye, over the course of four days here, you could actually see Woods’s driver swing, and his putting game, improve. You could see his golf becoming more confident and fluid, even if his gait was ever-so-slightly labored when he was done signing autographs early Sunday night. (Yes, you read that correctly — when he was done signing autographs.)

With the driver, in his Thursday and Friday rounds with Rickie Fowler and Phil Mickelson, there was a lot of hit and hold. It’s how he’s been hitting driver all year long. But on Saturday and Sunday, he was swinging the club. He was letting it go. It was beautiful to behold, if you’re into that sort of thing. The 69 looked like vintage Tiger, except for two swings with wedges, on 14 (leading to a bogey) and 17 (leading to a double). He looked like he was shooting 66, or even better, that’s how good his golf, and his attitude, was. He was firing on—

We interrupt this report for a public service announcement:

Please do not say, to your office colleagues, playing partners or loved ones, “Tiger’s back.” It will make you look like you lack golfing sophistication and that could have a terrible consequences.

Even if Woods had shot a Thursday-Friday 134 to go with his Saturday-Sunday 134 — even if he had shot 268 and bettered Webb Simpson by two — we would not be saying he’s “back.” That’s crazy talk. The game is different than it was in 1997 or 2000 or 2008 or 2013. His body is different, his head is different. It’s not happening. You shouldn’t expect it or even want it. Why would anyone want to go back in time?

That’s not suggesting he’s a shell of his former self. He’s not. He can still switch gears — play with mighty aggression one moment and immense finesse the next — like few can.

Consider his second shot on the long par-3 8th, for instance, from a bunker on the left side of the green. The obvious play would have been to splash the ball out with a little, almost one-handed half-swing, then let the ball trickle down a slope and leave himself some kind of putt for par.

Instead he played an aggressive full-swing explosion over the flagstick, off a slope on the opposite side of the green and then watched the ball come back toward him, and the hole, like he was pulling the string of a yo-yo. He then made the ensuing putt, a sliding downhill delicate four-footer, for an all-world par. It was stunning. As was his explanation of it.

“If I try and play the cute one just over the lip of the bunker, it’s probably going to go 12 feet past,” Woods said, post-round. “I didn’t have a very good lie. The ball was sitting down a little bit. If I was a little bit more on the upslope up, up closer to the lip, then I would have played that shot. But my ball was sitting down and I couldn’t put spin on it. So I had to play long and have it come back off.”

Five percent of the field would have both the vision to play that shot and the nerve. His Sunday playing partner, Jordan Spieth, is one of them. He grew up watching Woods. He plays the way Tiger taught him, in a manner of speaking, to play. Even as a 42-year-old marvel of medical engineering, Woods is longer off the tee, sometimes considerably so, than Spieth. Length matters. Less so on the Stadium course than most Tour courses, but over 72 holes the longer hitter will always have an accumulated advantage. Always. 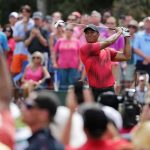 You may also like Tour Confidential: Tiger Woods is contending, but how close is he to actually winning?

Aggressiveness has always been the hallmark of Woods’s game. If he is scared of his driver, as he has been for much of this year, he cannot play Tiger Woods golf. On the weekend at the Players, he showed more willingness to hit drivers. Before Woods turned pro in 1996, in the last days of the balata ball, there were a variety of ways to play the Tour successfully. There were finesse players, curve-the-ball players, power players. These days, the game is the old high-school football cheer: Be aggressive / be-be aggressive.

Tiger is responsible for that, and to win again he will have to not only embrace that cheer but also pull it off. His drives on 9 and 14 were power-fade bombs that did not bring to mind Jon Rahm or Dustin Johnson, but they were plenty long enough.

His comfort with young Spieth was — continues to be — a pleasure to see. Woods can likely see that Spieth, like he, is a complete golf nerd who loves everything about competitive golf. They are different people. Spieth will talk more in a hole than Woods will in 18. When Woods was playing shots, Spieth would sometimes feel compelled to keep chirping to his caddie, Michael Greller, sometimes with his hand or even his shirt over his mouth, like a catcher at the mound with his mitt over his mouth.

There were some unexpected moments on Sunday, beyond Woods’s inability to hit the 14th and 17th greens with wedges. On the 7th tee, a young female fan announced several times that it was her husband’s birthday. Tiger killed his tee shot, turned toward the man — Dan Sturchio, 30 on Mother’s Day, and said in a low voice, “Happy birthday.” He actually fived some kids as he came off the 18th green.

In his post-round comments, there was a level of candor you haven’t heard from him often over the years, as when he said, “There’s no way I would have predicted I would be at this point the beginning of the year.” He talked about a goal: qualifying for the WGC event at Firestone this summer.

He didn’t go off dancing. He’s an old 42. “This weekend was more like it,” he said as he wrapped up another post-tournament press conference. A T-11 finish. A slightly labored walk to the clubhouse. The promise of better golf. That’s all. If golf is a central part of your identity and your income and your life, that’s a lot.