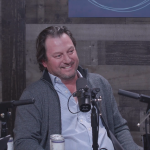 Jamie Sadlowski would lift. He’d hit balls, too. Sadlowski was 5-foot-10 and around 165 pounds — and during a stretch of over a decade, he competed in long drive competitions, won two world championships and smashed drives around 450 yards. And you don’t get that good without some lifting and hitting.

Then he’d put the dumbells and driver down.

For an entire month before Worlds, the biggest event on his calendar, his Super Bowl, Sadlowski said he would even take a month off and “literally just do nothing.”

“Yeah, one thing I never did is over-practice,” Sadlowski said on this week’s episode of GOLF’s Subpar, when asked about his daily training for long-drive competitions. “I mean, it’s so hard on your body, swinging, you know, not being a big guy, 40-inch club, heavy club. Like I never hit too many balls.

“You know, I would work on strength obviously, but always found — like when I competed, I was 165 pounds. When I showed up at Worlds, it didn’t matter if it was 2006 or 2015 — I was 165 pounds. I was heavier at times, and I wasn’t as fast, but for me, it was just all about, you know, getting a club way past parallel and being flexible. … And I was never a guy that was going to show up and, you know, changing my body like Bryson [DeChambeau] has. To me that wasn’t an advantage. To me that creates injuries and more problems. But technique, I’d work on technique. But these guys now, I watch them, they’re hitting 500 drivers a day. That is not good. Like that is how you have a short career, in my opinion.”

Neither would Sadlowski do much speed training for his long-drive competitions. “It’s like teaching a pitcher to throw at 105 miles per hour,” he said on the podcast. “It’s either he’s got it or he doesn’t. You can squeeze a few miles per hour here or there, but in my opinion, you either have it or you don’t.” Instead, he said, he worked out and lifted. He did deadlifts and Olympic lifts. As a player now on the Canadian Tour, Sadlowski said he works on stability.

And for a brief period, Sadlowski “was really crushing the cardio.”

“You told me, I think once, and correct me if I’m wrong, you would do for a part of your workout two hours on a StairMaster,” co-host Colt Knost said on the podcast.

“Hindsight’s 20/20, so maybe that wasn’t the greatest thing — just trying to be lean, you know?” Sadlowski said. “Show up at 160, and they’re like, ‘Look at this skinny guy.’ But, yeah, that probably wasn’t the best training. But yeah, I would sit on there for an hour just because I was bored.”

To hear the rest of Sadlowski’s Subpar interview, check out the video below.