The Social 7: Impersonation goals, Paige’s splash and 5 other things we’re buzzing about 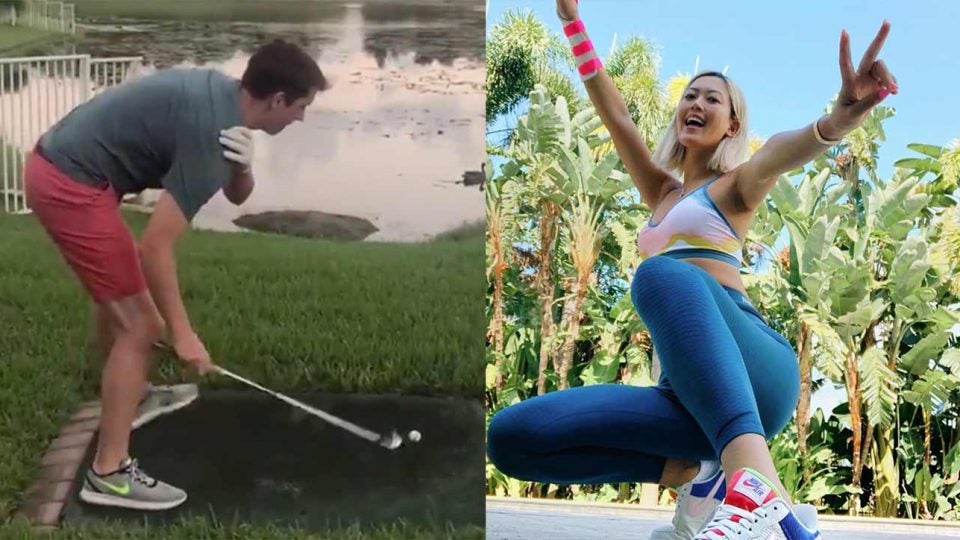 Jack Bartlett's swing impersonations and Michelle Wie's comeback (and shoes) are just two of the things we're buying from the past week.
Twitter/Instagram

1. The star of golf social media last week was Jack Bartlett, master of pro golfers swings and mannerisms. I watched Barlett’s clips imitating Keegan Bradley and Dustin Johnson no less than a dozen times each, and you should too.

Following my first impression yesterday of DJ I thought I’d share another with you all. Can you guess who!? Side note, I’m not a voice impersonator like the talented @ConorSketches I’m all about the mannerisms and swing #JBimpersonates pic.twitter.com/XbDaKZngB3

2. In honor of Veterans Day, GOLF looked back on pro golfers who served our country in the armed forces. Arnold Palmer was a noteworthy name, serving as an active member of the U.S. Coast Guard from 1951-53 before his pro golf career ever began.

Is it any surprise that The King looked dapper as ever in uniform?

We salute all the men and women who served our country 🇺🇸 Arnold Palmer served in the @uscg from 1951-53. #VeteransDay

3. Paige Spiranac, whom you likely already follow on social media, announced she’s joining GOLF magazine and GOLF.com as a contributor. Wait a minute, this is GOLF.com! Good news for us.

I couldn’t be more excited about Paige joining the team. Be on the lookout for a wide range of fun, entertaining and inspiring content in the works.

Only talent is taking selfies?😂 Well I wouldn’t blame you if you thought that. I always like to keep my IG feed fun and silly. But there is much more to me and I’m excited to use my voice now as a new contributor to @golf_com! I’ll have features monthly in the magazine and will be creating digital content. I can’t wait! I will be covering everything from golf instruction, fashion, to whatever else is going on in the golf world. The possibility are endless haha. Thanks for all your support and let’s do some cool stuff together. Let me know what you want me to write about and create in the comments below. I want to get you all involved! ❤️

4. Justin Thomas was L-I-V-I-N his best sports life over the weekend. JT visited Chicago for a Blackhawks game, Tuscaloosa for an Alabama football game and Nashville to take in Titans vs. Patriots.

Got room in the private jet for one more next time, JT?!

Only thing better than a game day? A game day in Tuscaloosa #RTR

4. Michelle Wie underwent surgery on Oct. 18 for a fracture and nerve entrapment in her right hand. The LPGA star flaunted her stylish pink splint and expressed her excitement to say goodbye to it in just two more weeks.

I’m not so sure this post wasn’t just an excuse to show off her fresh pair of Nike kicks, and I don’t blame her.

5. A new hype video for The Match seems to drop every other day at this point. It’s been a mixed bag so far. Some have been tough to watch, while others have reminded fans why they’ve enjoyed watching Tiger and Phil compete for so many years.

This walk down memory lane brought on all the feels. More of this and less empty-bucket golf pong.

Fair is fair: as bad as the golf pong video was, this one is that good. pic.twitter.com/w1WlMpF1Fc

6. Everyone loves a golf ball rollback debate, right?! This caught the ire of Brandel Chamblee on Twitter. He not only weighed in on the debate, he went all the way in.

The only thing I wish I could rollback is the time I wasted reading all of Brandel’s mentions from his series of tweets.

The golf ball debate had been ongoing since 1860, with every advancement being predicted as the ruin of the game and huge stars denouncing progress, yet the game changed for the better time and time again.

History does repeat itself. pic.twitter.com/2USlnfpgJE

7. Suzy Whaley, who was elected the first PGA of America female president earlier in the week, spent time with future leaders in the golf industry just a few days later. Whaley has wasted no time in making her impact felt in a positive way for the sport.

Some of our next generation of leaders @pga at the #pgaannual so wonderful to have these PGA PGM University students here!