The Social 7: A ridiculously long golf hole, puppies on Tour, crying for Reed and more 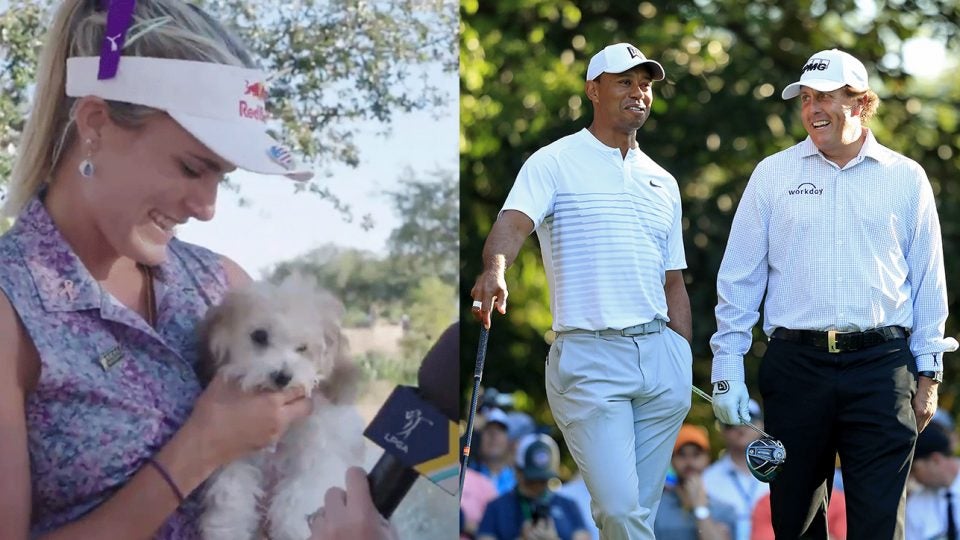 Lexi's new dog was the story of last week, but Tiger and Phil will be the story of the coming week.
Getty Images

1. Ladies European Tour player Florentyna Parker played a round at Gunsan Country Club in South Korea. Why is this notable? Well, the third hole at Gunsan CC happens to be the longest in the world, which she brought to our attention. When converted from meters into yards, this par 7 comes in at just under 1,100 yards.

I’m currently playing in Korea and came across a Par 7!
First time I’ve played one in my life. Was a weird feeling standing on the tee with over 1KM to go!
What are your thoughts about a Par 7?
Should we have them in Europe? pic.twitter.com/vQXcmPwKbu

2. If a baby cries during Patrick Reed’s backswing, do you really think he’s not going to acknowledge it? The most surprising thing about this clip is that Reed didn’t holler out: “Is that Jordan Spieth in the crowd?”

Patrick Reed swings.
A baby cries.
All is right in the world.

3. For the most part, professional golfers are rather bland during post-round interviews. One way to spice it up? Puppies! I’ve watched this Lexi Thompson interview several times now and I still have no idea what she said. My entire focus has been on her puppy Leo.

It's a ruff life.@Lexi Thompson, with her puppy Leo, chatted with @TheAmyRogers following her 5-under 67 in the 2nd round of @CMEGroupLPGA.

She takes a 3-shot lead heading into the weekend. pic.twitter.com/4PyErPYLCS

4. Danny Willet has been on a cold streak since winning the Masters in ’16. Is it really possible a two-year bender was holding him back? Better yet, should a Masters celebration be limited to just two years?! Mine wouldn’t.

Let’s keep a close eye on Willet to see what he does for an encore celebrating his DP World Tour Championship win. Hair of the dog, Danny.

5. Brandel Chamblee’s twitter feed has essentially turned into a YouTube rabbit hole of pro golfers’ swings from their youth. His latest obsession is breaking down Cameron Champ’s mechanics. There’s no question that it’s been fun watching Champ go from a prodigy to a rising star on Tour.

Imagine seeing a 13 yr old swing a club like this, you’d think there is no limit to what he might do in the game. Cameron Champ did things in his swing as a child that defied logic. As an adult he’s proving to be just as mind blowing.

The change of direction, like the best ever pic.twitter.com/YfRc3Svimc

6. Movie director and writer Judd Apatow knows a thing or two about enticing an audience to pay to watch content, and it appears he was sold hook, line and sinker to order The Match. Judging by the amount of lackluster promotion we’ve seen leading up to Friday’s showdown, it’s a shame we didn’t get Apatow feeding Tiger and Phil lines. Fingers crossed we avoid a Trainwreck performance in Vegas…

I am all in on on #tigervsphil – and that’s from someone who tried to play golf once and instantly herniated a disc and needed surgery. I think my warm up was not adequate. https://t.co/2yY4KAQcse

7. “How many tees should I take” is one of the oldest dilemmas in golf. You always want to make sure to take enough to cover your round. On the flipside, you don’t want to come off as the cheapskate bumming anything that isn’t nailed down at the country club.

And all this time I thought it was just your keys rattling around in your pocket, boss.

Among the quandaries that keep me up at night: What is the appropriate number of tees to grab at the starter’s shack? Genuinely interested to hear Twitter’s take. pic.twitter.com/zA5nR30hwB