The Greenbrier Flood: A Tale of Terror, Loss and Hanging On 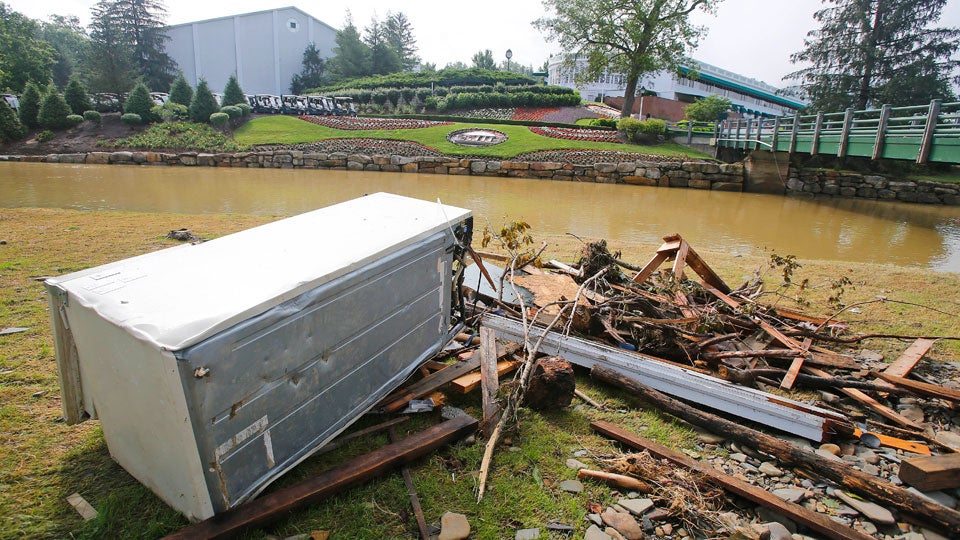 Floods ravaged much of the tournament venue.
AP Photo

Life is not easy in White Sulphur Springs, the remote and rugged resort town in rural West Virginia. There’s one big employer in town, The Greenbrier, where jobs are often listed and working conditions are good, but to make a living at the historic hotel as an hourly worker is a struggle, to say the least. Among the hundreds who could tell you about that life is Jason Lewis, a golf-course crewperson. He’s a hardworking man who tends to greens and bunkers and raises his hand to do whatever else is needed. He takes pride in his work. That’s almost a given at the resort. You can’t have a hotel as grand as The Greenbrier without dedicated employees. But Lewis and his wife, Nicole, a homemaker for senior citizens, face the same struggles that so many hourly-wage workers do: the constant search for money and space and opportunity, and limited time in which to do it. No, it’s not easy at all.

Nicole has three biological children and two stepchildren, plus an old beloved pit bull. Jason has a home on the far outskirts of town but with space tight and money tighter Nicole and Jason agreed to separate some time ago. Nicole and her three kids, plus the dog, moved into town, to a house on Mill Creek Avenue, with a backyard on Howard’s Creek.

Nicole, 29, has known for years that she wanted more out of life than what White Sulphur Springs was offering her. She graduated from Greenbrier East High and returned to school some years later, making the dean’s list in the fall of 2013 at New River Community and Technical College in Dublin, Va. You can see her yearning in a mini-biography she posted online about four years ago:

i am 25 years old i have brown hair and eyes. i am trying to get rid of my baby weight so i hope to be slim soon:) i have a wonderful baby boy and girl they are my life! i am single and dont see that changing anytime soon because my kids are my main focus right now. plus i am getting my education and hope to move me and my kids out of this s—– town!

But small towns are hard to leave, and four years later Nicole was still in White Sulphur Springs. And then came June 23, a rainy Thursday. Everybody in town knew it was going to rain. Everybody knew there was a chance of flash flooding. No big deal. Happens all the time, down in the holler especially. You put on your rubber boots, run from the car to the front door and wait for the rain to stop. Nicole had gone to work early on that Thursday, helping old folks in Greenbrier County with the chores of daily living that they could not do themselves. By mid-afternoon, she was driving home in a hard rain. An unusually hard rain. Still, no big deal. You live in rural West Virginia, you learn how to handle the elements.

Josh Pope, the superintendent at the Greenbrier’s Old White course, had a busy day planned for that Thursday. There was some limited play scheduled for the morning but the main thing on his mind was the upcoming event, The Greenbrier Classic, the PGA Tour stop that would be starting in exactly two weeks. Monday, July 4, was prominently on his calendar as the first day for practice. He’s a scholarly and serious young man, a Georgia graduate whose times in Athens overlapped with Bubba Watson. The Tour star, too, was, in a manner of speaking, a Greenbrier employee. Watson represents the club and lives there in a rustic splendor for much of the summer, with his wife, Angie, and their two children. Lee Trevino does too. Josh got a kick one day when Trevino called out to him something like, “Let me know if I can help with the watering—that’s how I got my start.” The Greenbrier Classic came out of a dream for Josh. “A chance to showcase all our hard work,” he’ll tell you. He’s a bachelor—married, you could almost say, to his work. For years, he had a bulldog, a statement of his devotion to his alma mater. You’d be hard-pressed to find a course superintendent who is not a dog person, but Josh was still mourning the passing of Divot.

He has at least three weather apps on his phone and another on his computer. Weather warnings are a way of life in Greenbrier County. So is glorious sunshine. That’s why grass grows so abundantly there. He saw the warnings for flash floods on that Thursday morning. Really, that’s nothing. “We get them all the time,” he says. Business as usual. He still planned to top-dress the greens and roll the tees. There was a drenching morning rain, and then it stopped, until the rain resumed in midafternoon.

As the afternoon rain continued to fall, Josh met with his boss, Kelly Shumate, and a salesperson from Trinity Turf. Still, business as usual. Then a lightning bolt struck the car of a grounds-crew employee  that made the men jump our of their seats. When they inspected the car later, they could see, as Josh said, that “it was fried.” The storm had to be particularly worrisome for Trevino, who grew up in Texas and knows all about severe weather, and whose career was interrupted in 1975 when he was struck by lightning while playing. Howard’s Creek, which runs through the course, was rising, as it often does. But now the rain was powerful and unrelenting. Josh thought, “This is getting bad.” He went out to survey the situation and saw that entire holes were underwater. He was still focused on his course and the upcoming tournament. “I was starting to get a numb feeling,” he said.

Nicole Lewis tried to get to the door of her house, but she couldn’t make it through the impromptu river that was now running across her lawn. Her kids, staying with relatives, were safe. The dog was on the porch. The rapids overwhelmed her and started to carry her away. She was washed in the direction of a stout oak, almost too wide for her to get her hands around. But she did. Her neighbors shouted out to her and told her they would call for help but discovered that their phones were dead. Nicole prayed. She thought about her children. She held on to that tree for dear life. Twice, she felt her grip coming loose. Twice, she thought she was a goner. She held on for at least two hours, most likely closer to three and maybe more like four. It was hard to keep track, but she hung on to that tree all through the storm, the water raging beneath her. A bulldozer, of all things, ultimately came to her rescue. Before the night was out, she had a tearful reunion with her kids. Her beloved dog, 16 years old and with bad hind legs, was gone. But the kids, thank God, her own children and her stepchildren, were fine.

The next morning, Josh Pope walked the course. The extent of the devastation was obvious. Twenty or more people had been found dead or were missing. Reports from the Greenbrier County sheriff’s office noted three bodies found on or near the Old White course: a grandfather, his daughter and her son, with different surnames but all members of the Nicely family. Josh knew it would be impossible to hold the tournament. He was thinking about Old White, of course, but was far more focused on questions of life and death. When he saw an aging pit bull with a tan coat and a white head on the edge of Howard’s Creek, he was grateful for the opportunity to save a life.

“The dog walked with me all the way around the course, followed me around all day,” Josh said. It was no ordinary day. He started calling the pooch Bubbie. On his way home to Lewisburg, about eight miles away, he bought dog food. At home, he gave Bubbie a bath. At the end of a stressful day, Bubbie slept in Josh’s bed. Josh scoured the Internet, seeing if he could reunite the storm-dog pit bull with its rightful owner, half-hoping he could not. “He is an awesome dog,” Josh said. Still, he tweeted out a picture. He posted another with the Greenbrier Humane Society.

On Saturday, Josh Pope got a call. The dog’s actual name was Asada, and his owner, Nicole Lewis, was a White Sulphur Springs woman whose husband was a golf-course worker. Josh Lewis worked not at Old White but at a another Greenbrier course, The Meadows. The two men didn’t know each other, Still, what a small world. Nicole came to the Old White maintenance building to be reunited with her dog.

He learned the harrowing story of her survival. Everybody was in tears.

“Thank you for saving him,” Nicole said.

It was not a happy day. Nicole had been friends with the Nicely daughter who had been found on the golf course. The news was filled with death and destruction. It was simply a happy moment.

Nicole’s house was uninhabitable. Jim Justice, the owner of The Greenbrier, put up about 300 people, volunteer emergency workers and people rendered homeless by the storm, for the next two weeks. Nicole and her three kids were among them. Asada stayed with Nicole’s mother. Her kids went bowling almost daily at the hotel lanes. They ate meals in the hotel cafeteria. There was no hot water for the first week. Nobody was complaining. Just the opposite. Nicole posted this message on Facebook:

Thank you so much Mr.justic [sic] for letting my three kids and I stay at the hotel. It took alot off for a little while. We will never forget this!