‘That was one of the great shots ever’: Lexi Thompson escapes a bunker 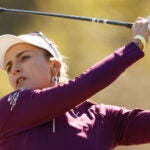 Lexi Thompson hits her tee shot on the 3rd hole at Tiburon Golf Club on Friday.

Lexi Thompson, on the par-5 17th at Tiburon Golf Club, had dropped her second shot into the backend of a long, greenside bunker. She’d quite possibly drop this third shot back into the bunker, too. Or drop it short of the green. Or over the green. Her ball was less than a yard in front of the bunker’s 2-foot-high wall, she had about 15 yards just to escape the sand, and she had  about 40 to the flag.

“Even though you are going to miss that lip on your backswing, it’s always at the back of your mind on the downswing,” analyst Jerry Foltz said on the Golf Channel’s broadcast of Friday’s second round of the CME Group Tour Championship.

“That’s what I was thinking. There’s a lot of things that could go wrong here,” analyst Judy Rankin said.

“She was worried about hitting her leg on the downswing,” announcer Tom Abbott said.

Thompson did not hit the lip on her downswing.

She did not hit her leg, either.

Nothing went wrong for her.

Thompson’s ball dropped about 30 feet short of the pin, took four bounces and curled to about 8 feet of the flag.

“That was one of the great shots ever,” Rankin said.

“I’m not speechless too often, but that one, superlatives don’t describe,” Foltz said on a replay.

“So it was one of those shots where you hit and hope,” Thompson said after her round. “I got in there I was like, ‘OK, there is this miracle shot,’ and it just happened to happen.”

Before the shot, Thompson took one and a half practice swings from the bunker before stepping out and going to her bag for a less-lofted club. She talked to her caddie and brother, Curtis Thompson, too. He wanted her to open the face of the club, carve her ball out left of the flag and spin it back to the hole. She took six practice swings and hit.

“From now on, when we say she can spin the golf ball, believe us,” Rankin said.

Thompson stumbled a bit walking out of the trap as she watched, she wiped some sand from her legs, and she laughed with her brother as they walked to the green. Thompson would miss the birdie putt, and she is one shot behind leader Jin Young Ko heading into the weekend.

“Lexi Thompson spends a lot of time in the gym, and the strength here certainly paid off,” Abbott said. “It just came out exactly as it needed to.”

“Some kind of shot,” Rankin said.