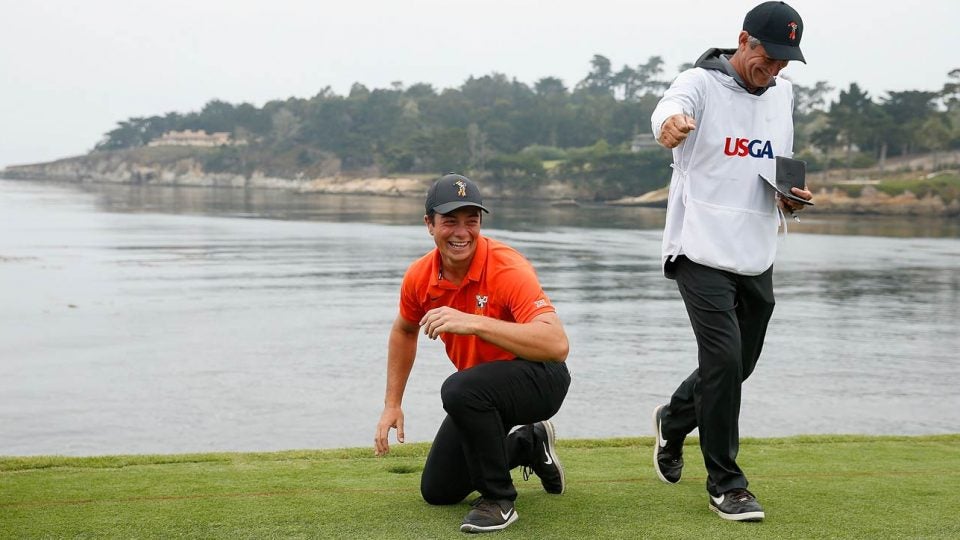 Viktor Hovland during the championship match for the U.S. Amateur at Pebble Beach.
Getty Images

With the dust having settled on his new Ping equipment contract, Viktor Hovland took a few minutes to discuss many gear topics with GOLF Managing Editor of Equipment, Jonathan Wall, from his decision to sign with Ping, the last-minute club changes he made just prior to the U.S. Open, and why he’s not all that methodical when it comes to testing new gear.

What was the transition like going from TaylorMade to Ping equipment?

Viktor Hovland: It wasn’t all that complicated. It was more just taking a few clubs out and trying to match them to the specs of my previous TaylorMade. I’d look at the ball flight, evaluate the feel and from there I was able to tell if it fit my eye and the flight I’m used to seeing.

What made you choose Ping?

Hovland: I really liked the flexibility Ping’s 11-club deal offered me. With TaylorMade, it would’ve been all 14 clubs and the ball. With Ping, I still have some flexibility if I want it, which is always nice. Plus, the product performed great for me. There wasn’t a ton of changes that needed to be made. Overall, I’d say it was a really seamless process. That kind of simplicity is really nice when you’re changing equipment.

Walk me through the club changes you made at the U.S. Open. Was there any part of you that was nervous about shaking things up hours before the first round?

Hovland: I played nine holes with the i210 short irons on Wednesday of the U.S. Open and just noticed they launched a little lower. I wanted to have a little lower ball flight with the shorter clubs to give me a bit more control. So they were in the bag once I started seeing the flight. With the G410, I started hitting some different builds on the range and I just told myself, stop messing around and just play this one and see how it goes. I messed around with the weights a bit to keep it from overcutting, but that was about it.

How much do you rely on launch monitor numbers versus what you’re seeing and feeling during testing?

Hovland: I feel like TrackMan is good for spin and launch, but I just like to see the ball flight and get a good feel for the club. That’s ultimately what it comes down to for me; not simply what the numbers say is the “best club.” I don’t really do the most methodical testing.

Are you going to do any club testing between now and the end of the season?

Hovland: I think so. I’m going to give the Blueprint irons another try to see if I like those. Maybe switch out the i210’s in the 7-iron through pitching wedge. Just going to see how it all goes. I really like the iBlade irons in the longer clubs. I’m always open to change stuff if I feel like there’s room for improvement.

How much did you know about Ping’s connection to Norway before you signed?

Hovland: Ping has done a lot for the game, including in Norway as well. I thought it’d be really cool to partner with a company that has such close ties to home. That made me really want to represent them.

In Gee Chun dazzles, plus 2 other observations from Day 1 at the KPMG Women’s PGA
Go to mobile version