Why Steph Curry is ‘haunted by’ golf—even during Warriors games

When you see Steph Curry on the court for Saturday night’s playoff game against the Houston Rockets, there’s a chance his mind is on something else — golf. Curry revealed in his Facebook series “Stephen vs The Game” that working on his swing is never far from the top of his mind.

“I think I think about golf way too much, it’s a problem. Like, during a game, yeah,” he says in the show.

“If I’m on the bench, dead ball or something, a swing tip might pop into my head…I’m haunted by it. That’s what my wife says.”

Curry has drawn inspiration from two golfers in his life: his father, Dell, and Tiger Woods. “Golf’s a big part of my life, and it started with my dad,” Curry says.

“When I was 10, he used to take me out and I’d hop in the golf cart with him and I just had a little cut down putter he gave me. I started to fall in love with it myself because how much fun you can have and how competitive you can be with yourself.”

As for Woods? Curry admires his drive. “I’ve never seen a killer instinct like that, where you know you’re the best, but still searching for perfection,” he says.

Curry tweeted his congratulations to Woods as he donned the green jacket for the fifth time following last month’s Masters.

Greatest comeback story in sports! Congrats @TigerWoods Let me hold one of those 5 jackets one time!

Curry has played twice in the Web.com Tour’s Ellie Mae Classic, which is near his home in the Bay Area. He has missed the cut both times, but played to impress. He’s also predicted to be among the contenders at this summer’s American Century Championship, where athletes and celebrities from around the world gather for a week of golf in Lake Tahoe.

But first there’s some unfinished business on the court. Curry’s Golden State Warriors lead the Rockets 2-0 in the conference semifinals and remain the favorites to three-peat as NBA Champions. 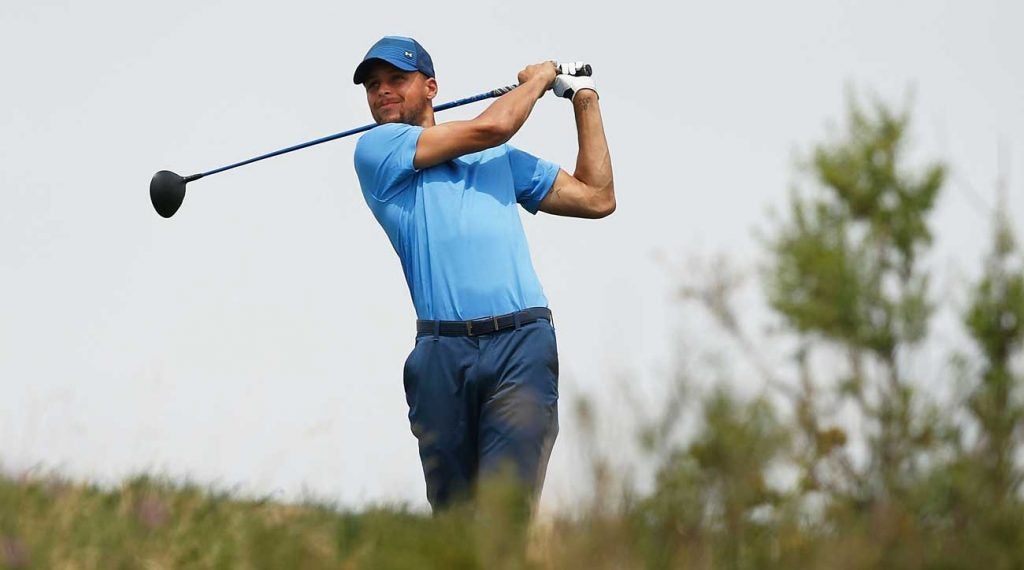 Steph Curry's public relationship with golf seems like it is only just beginning.
Getty Images