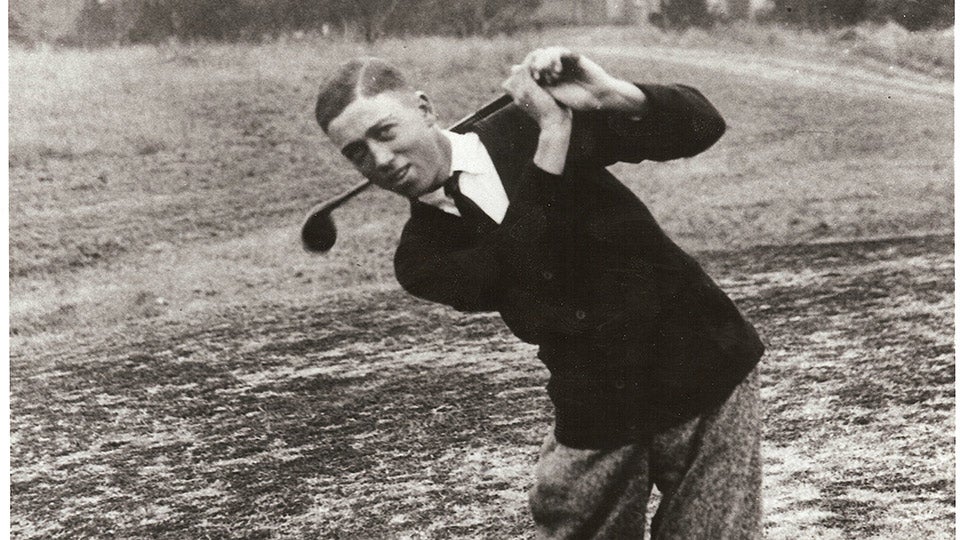 Penick, who called Austin Country Club home, was a man of few words on the practice tee, but he got his points across.
Courtesy of Tinsley Penick

On a spring morning in 1991, an old man left home for a brief drive through the neighborhood on a bluff in Austin, Texas. He held his life on his lap.

The journey took Harvey Penick less than five minutes – across a busy street, past million-dollar mansions, down one leafy hill, up another, around the bend to the only entrance to Austin Country Club. The guard at the gate waved him through. Harvey stopped in the shade of a favorite live oak tree. He hailed his son, the club’s head professional, Tinsley, from the golf shop. He asked him to make a call to the writer Bud Shrake, and that’s how the little red notebook in the briefcase Harvey carried to the club became the famed Little Red Book.

The top-ranked 64 players in the world will pass that very spot this week during the WGC-Dell Match Play, the first PGA Tour competition at the discerning club on the south bank of Lake Austin. So will thousands of fans who might have read Harvey’s best-selling book. Most of them won’t cast a glance in its vicinity. They won’t even know where to look.

They won’t know, for example, that the corner of the practice range near the 16th green — playing as No. 8 for the Match Play — is where longtime ACC member Tom Kite clipped wedge shots as Harvey watched from his cart with an afghan on his thin legs. They won’t know where Harvey met James Michener, the author, for lunch. Or where he shook the hand of President Gerald Ford in the parking lot in the rain. Or that Harvey spent the later years of his life in a certain spot near the tee of the first hole, printing by hand the names of players and their guests on a ledger sheet, and advising them to take dead aim. They won’t know where Harvey parked his cart when he came to the club. The sign designating his space — Reserved for Harvey Penick — hasn’t been there in more than 20 years.

They won’t know where Harvey gave his final lesson on the range. It was over by where the grounds crew used to keep the carts. It included three men from Midland. One of them, Billy Munn, had played for Harvey at the University of Texas, whose men’s team Harvey coached for more than three decades. Munn and his two friends flew in to meet Harvey that morning in April 1994, and the lesson lasted through lunch. Harvey could barely see, but he asked a lot of questions. Where did that shot go? What does the divot look like? He listened to the sound of the shots.

The players and spectators at the Match Play won’t know where Harvey used to go, on the high ground near the putting green, to just sit, letting the view of the holes below wash over him like warm water. They won’t know that the bronze statue of Harvey and Kite, the one they pass on their walk to the first hole, once stood in a different place.

Hundreds of club members convened on the morning of April 2, 1995, to witness the unveiling of the statue just outside the clubhouse doors that face the course. Harvey was not there. He lay in his bed in the house down the street, too ill to attend the event in his honor. He died that afternoon.

Will anyone remember how that day ended, with so many flowers at the foot of the statue?

Will they even know where to look?

Austin Country Club isn’t an easy place to see. Seven of its lovely holes slither near the lake, in view to traffic on Loop 360 on the Pennybacker Bridge. But most of the property, including Harvey’s favorite tree, is embedded deeply inside Davenport Ranch, where Harvey lived the last years of his life and died a best-selling author at the age of 90. For many people, including longtime residents of Austin, their first look at Harvey’s home will be through the television lenses broadcasting this week’s event.

The international broadcast will show a lot: the iconic through-arch bridge, the statue in its new place, the demanding Pete Dye golf course that cascades through canyons, the lake that winds toward dynamic downtown Austin, the University of Texas tower, the stately capitol of sunset-red granite, the famous Sixth Street, the bustling Congress Avenue, the Broken Spoke dance hall on South Lamar, the 68-degree waters of Barton Springs.

It might show the tree — Harvey’s tree, the one where the Little Red Book came to be. It’s the one nearest the veranda, close to the golf shop, bigger now than it was.

Now you know where to look.

Kevin Robbins teaches journalism at the University of Texas at Austin. His first book, Harvey Penick: The Life and Wisdom of the Man Who Wrote the Book on Golf, will be published by Houghton Mifflin Harcourt on April 5.