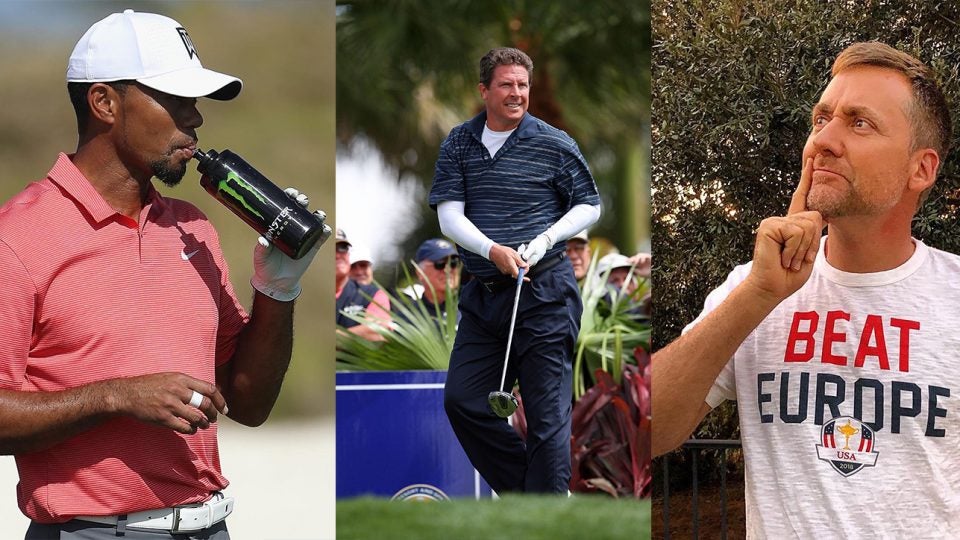 Tiger may soon have an energy drink, Dan the Man is a trick shot artist and Ian Poulter did what he does best.

In case you forgot, Poults is here to remind you of the Ryder Cup result. He did some updating to a t-shirt several members of Team USA were seen wearing in Paris. I have to give Poutler credit where credit is due. It’s impressive that he was able to write on his chest, and pound himself in the chest, at the same time.

Can anyone spot the mistake in this photo.. @rydercupteameurope 🤔

It’s ok I managed to fix the mistake… How does it look now ? @rydercupteameurope 😉

Welcome to the birdie club, Jillian! Don’t get used to it.

The best part about wearing a golf glove for Marino? It helps prevent “where’s your Super Bowl ring?” jokes.

4. Brooks Koepka gets knocked for being a boring golfer. He dominates in silence and rarely shows emotion. How is a guy like that going to help grow that game?!

Well, it appears Koepka has inspired at least one youngster. Maybe there’s an army of Koepka clones out there learning to play golf?

This boy has already shown more jubilation than Brooks has after winning any of his three majors.

5. Tiger is reportedly in talks with Monster about a branded energy drink. The biggest question on everyone’s mind: What should it be called?

Eye of the Tiger?

Let’s hope whoever is tasked with deciding what the drink’s name is checks our replies first.

Tiger is in talks with Monster to produce a branded energy drink. What would you name it?! 🤔 (More about this potential venture from the link in our bio)

6. Golf’s offseason is upon us. Some choose to continue working on their game while others choose to unwind. Max Homa is facing that very dilemma right now.

My question is why not both? Tuck a bottle into the bag and you’ll be loose on the course without even having to warm up. Tequila sunrises before a tee time. You down, Max?

7. A throwback interview between Curtis Strange and some rookie named Tiger Woods resurfaced this week. Tiger was full of confidence from a young age and clearly aggravated Strange with his “if you ain’t first, you’re last” mentality.

Strange ends the interview by saying “you’ll learn” with a smirk.

Eighty wins later and I think it’s safe to say the only one that did any learning from this chat was you, Curtis.