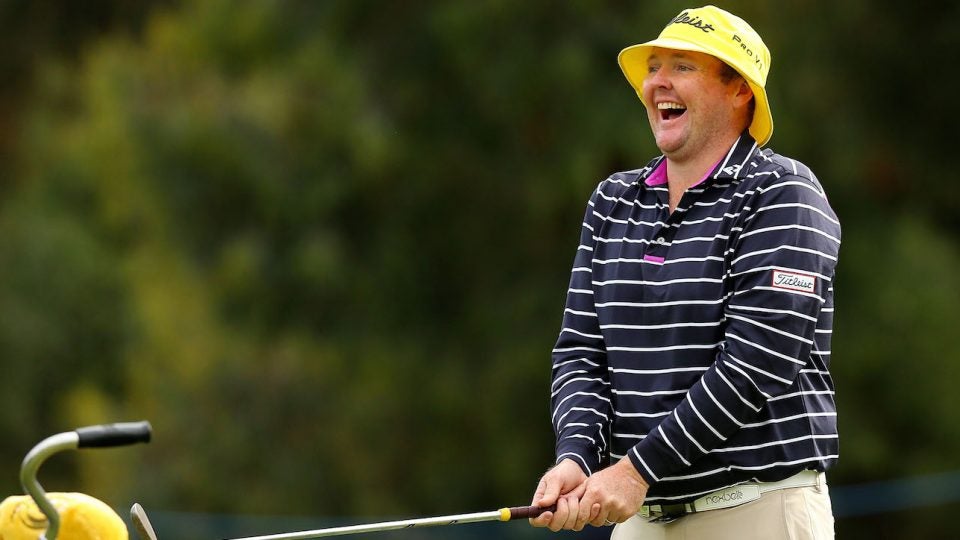 Jarrod Lyle laughs during the Pro-Am ahead of the 2015 Australian Masters at Huntingdale Golf Course.
Getty Images

ST. LOUIS — Professional golf is a lonely pursuit. The players today, faking it, offer a lot of we-did-this and we-did-that in their post-round reviews. But the actual act of playing golf is solitary. That’s true for Tiger Woods, on his comeback road, with all those potholes, and despite all those people cheering for him from the road’s shoulders. It’s true for Dustin Johnson, the No. 1 player in the world, even with his caddie-brother, A.J., beside him. As the old song says, “One is the loneliest number you’ll ever do.”

It’s true for Marc Leishman, the big Aussie golfer, free-swinging and easygoing, who’s becoming a fixture at golf’s most important events. If you’re lucky, Leishman said the other day, “you’ve got a mate in this game.” His was Jarrod Lyle, a big Aussie golfer, free-swinging and easygoing, who died on Wednesday at age 36. Leishman, among others, is playing in the PGA Championship this week with an aching heart.

Lyle played in 69 Web.com events and won twice and in 121 Tour events without winning. Viewed through that narrow lens, his career was ordinary. It was anything but. Just to make it to golf’s most elite league while battling leukemia — which he did from age 17 — is remarkable. As Woods himself once said, “It’s not what you achieve in life that matters; it’s what you overcome.” And to lead your life — Lyle was married and the father of two daughters — with good humor and joy, knowing all the while that literally in your bones is a disease that is often a death sentence, is north of remarkable. Way north.

Late on Thursday afternoon, Leishman, 34, was on the course here, Bellerive, trying to make a decent score in this 100th PGA. He has now played in eight of them. His mate never got the chance. The bearded golfer shot a “distracted” 68, two under. Two other golfers from Australia, Adam Scott and Jason Day, both friends of Lyle’s, played through sorrow of their own. Scott shot 70 and afterward said that Lyle “was the ultimate Aussie bloke.” That is, manly, independent, funny, unpretentious.

Day, after his 67, spoke with emotion about living “across the street” from Lyle in Orlando, when they were in the early stages of their pro careers. Two young Aussies living as neighbors on the other side of the world, trying to find a place in the game. “He battled half his life,” Day said. “And the crazy thing is he was always upbeat and positive. No matter what you did, you could be playing terrible, and if you’re playing golf with him, you always walked off the golf course happy.” What a beautiful image and tribute.

Scores of players, caddies and broadcasters have been wearing yellow ribbons, in tribute to Lyle. A yellow ribbon symbolizes different things in different times and places and at Bellerive this week they are a nod to the yellow bucket hat that was Lyle’s signature headpiece. The hat itself was a nod to a mascot called Leuk the Duck, an Australian symbol of support for kids with leukemia.

Rickie Fowler took his tribute to another level, wearing a yellow shirt on Thursday instead of the dark blue one he was “scripted to wear,” in Fowler’s fine wording. He also wore a yellow, metal Leuk the Duck pin on the crown of his baseball cap, covering the P for Puma. He shot 65 and said “it’s bittersweet.”

He and Lyle were friends and Fowler noted how particularly hard the news is for the Aussie golfers who had known Lyle long before they had made it on Tour. The Aussie golfers, almost in turn, noted how hard it must be for Lyle’s wife, Briony, and their daughters, Lusi and Jemma, all back home Down Under. Briony and Jarrod met after he, puffed by by a high finish in a long-ago Australian Masters, was flirting with a cute flight attendant the following day. Aussie bloke style, right there. Briony announced the sad news earlier this week. She did so with stunning clarity and directness:

“It breaks my heart to tell everyone that Jarrod is no longer with us. He passed away peacefully at 8:20 last night having spent his final week among his family and close friends. He asked that I provide a simple message: ‘Thanks for your support, it meant the world. My time was short, but if I’ve helped people think and act on behalf of those families who suffer through cancer, hopefully it wasn’t wasted.’”

On Aug. 1, Briony used a phrase that many people, in golf and beyond the game, would not know, when she said in a social-media posting that her husband was not longer seeking a cure for his disease. She wrote, “Earlier today Jarrod made the decision to stop active treatment and begin palliative care. He has given everything that he’s got to give, and his poor body cannot take anymore. We’ll be taking him closer to home in the next couple of days so he can finally leave the hospital.” Palliative care, in layman’s terms, is medical treatment meant to ease the pain, physical and emotional, of people who are nearing death.”

Briony continued: “Jarrod knows he is loved, and the thousands of prayers and well wishes that have been sent his way have kept him going through some incredibly tough times. But he has reached his limit, and the docs have finally agreed that they can no longer strive for a positive outcome.”

The stark, harsh and awful truth is thousands of people die of cancer everyday across the world. There’s so much death by cancer in this world you can be come inured to it. Then came this news about a golfer who was nothing like a household name, and it captured the attention of the broad golf community. Why is Jim Nantz wearing a yellow ribbon? And the reason it did was because of Lyle’s personality, his warmth, his humor, his cheerful disposition, whether he made a bad score or got a bad test result.

“He and I were the same,” Leishman said Thursday night, after a long day in the office. “We were from the country. You get on Tour, and the car is waiting for you. The equipment is perfect. The hotel. But if either of us had ever gotten too big, we would have smacked each other in the head. Where we came up, how we came up, there was no tolerance for that.”

They were both student-athletes at the Australian Institute for Sport. Intense, residential programs like that, government-sponsored or not and no matter where they are in the world, can sometimes zap the love-of-sport out of the athlete, but Lyle’s experience was the opposite, Leishman said. In golf, these kinds of programs can teach cookie-cutter technically-perfect swings that are devoid of personality. Leishman and Lyle, remarkable similar in physique, had similar swings, big and long and flowing, with beautiful timing. Swings with flair. Payne Stewart’s swing had flair, and his wardrobe accentuated it. The same was true, in his own way, for Lyle, always in his yellow bucket hat.

On the Wednesday before the 2015 Masters, Lyle was honored at the Golf Writers Association of America dinner. He was given the Ben Hogan Award, for “remaining active in the game despite a physical ailment or illness.” Lyle spoke movingly and without notes about how he persevered in the game despite his illness. He was big in every way. Some of the last photos taken of him, in bed with his family beside him, made the ravages his disease, wrought by acute myeloid leukemia, painfully obvious. But in the photo he is hugging one of his kids, and even over the internet, just looking at the family snapshot, you could sense how big he still was in spirit.

Australia has a long tradition of turning out blokes, a word used here as high praise. Accepting life’s setbacks with a certain ease is part of being a bloke. Jack Newton, the runner-up in the 1975 British Open to Tom Watson, was a classic Aussie bloke golfer. He has been a force in junior golf in Australia, despite losing his right arm some years later in a gruesome helicopter accident. Stuart Appleby, runner-up in the 2002 Open after a four-man playoff won by Ernie Els, is another prime example of an Aussie bloke golfer. He has known tragedy, too — Appleby’s first wife, Renay, died after being struck by a taxicab in London in 1998. Leishman is a certifiable bloke himself, and maybe it is only a coincidence that he too was an Open runner-up, in 2015, at St. Andrews, in the playoff won by Zach Johnson. He has now lost Jarrod Lyle, his roommate — and his mate mate.

Adam Scott — who also has an Open runner-up finish, to Ernie Els in 2012 — talked late Thursday afternoon about the impact Lyle had on him. He and his wife have a son and a daughter. He talked about taking what he learned from Lyle’s life and times and teaching it to his children. “He’s the kind of person I would want my kids to be,” Scott said. That is, a person with a sense of balance between work and family and play. But more than anything, fun and kind.

Leishman, also married and the father of three, said nearly the same thing. “It was very simple with Jarrod,” Leishman said. “Treat others as you would want to be treated. Didn’t matter to him whether he was talking to the prime minister or the person cleaning the locker room.” Leishman was in the Bellerive locker room.

One of the things Scott, philosophical in his own way, is taking from Lyle’s death is the insanely difficult goal of trying to truly appreciate every day any of us have on this earth. That’s why it is so powerful when Lyle, in the words shared by his wife, said “my time was short” but that “hopefully it wasn’t wasted.” It brings to mind what Emily says near the end of the Thornton Wilder play “Our Town.”

She asks the play’s Stage Manager, “Do human beings ever realize life while they live it? — every minute?”

Stage Manager: “No. The saints and poets, maybe — they do some.”

“I have tried to do that, but it’s not easy,” Scott said. “I had a week this year where I really made an effort to do it — but it’s hard.” Maybe impossible. But a worthy goal. Death always brings this question into sharper relief.

So the players, professional golfers accustomed to working in such splendid isolation, have been joined this week by their yellow ribbons and their memories of a beloved golfer who died too young. They are woke. You try to make it last.