Honesty from the abyss: Smylie Kaufman opens up about his yearslong struggle to regain his confidence 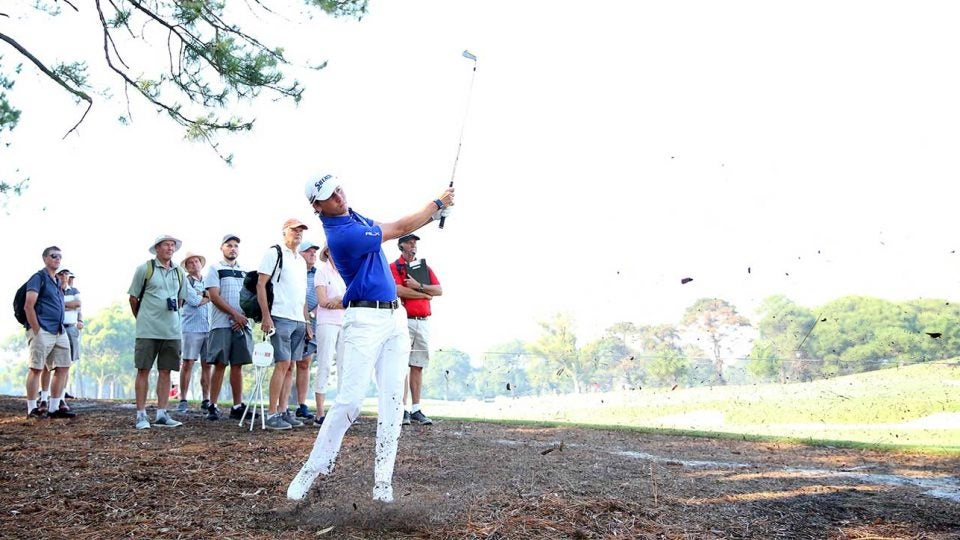 Smylie Kaufman watches a shot during the 2019 Australian Open. He's playing this week on a sponsor's invitation.
Getty Images

SYDNEY, Australia — From missed cuts to missed flights, Smylie Kaufman’s global search for his game isn’t getting any easier.

A three-tournament trip to Australia and Indonesia is a long haul from the U.S. It’s even longer when you’re a Tour player short on form and confidence.

The non-stop flight from Houston to Sydney clocks in at 17.5 hours. Daunting, sure. But miss it and you’re waiting an entire day to get on the next one. That’s the predicament Kaufman faced Saturday night when he missed his red-eye out of Houston, meaning he arrived in Sydney on Tuesday morning, instead of Monday, not an ideal situation with the Australian Open — to which Kaufman had received a sponsor’s exemption — beginning on Thursday morning.

The 28-year-old had planned to cram in two practice rounds by Tuesday night at the Jack Nicklaus-designed course at The Australian Golf Club. That would allow him to relax in the Wednesday pro-am. Instead, he played only seven holes on Tuesday.

“It felt like a sledgehammer,” Kaufman said of the jetlag. “It was a long haul. I’m still trying to get adjusted.”

On Thursday, the one-time PGA Tour winner open the Australian Open with a four-over 75. But he refused to blame the 8,300-mile slog.

“That’s never an excuse,” he said.

Kaufman’s struggles have been well-documented since enjoying a meteoric rise through the PGA Tour ranks. Remember that 23-year-old who — in his fifth career PGA Tour start — shot a final-round 61 (featuring seven birdies and an eagle over his final 11 holes) to win the 2015 Shriners Hospitals for Children Open in Las Vegas? Or the star-in-the-making who, in 2016, played in the final pairing on Masters Sunday?

It was the stuff of dreams. But the dreams turned into nightmares.

Last year the ridicule on social media was so bad that he took a two-month sabbatical from the wastelands of Twitter and Instagram. More recently he has declined media requests in the U.S. as he tries to regain his confidence.

But in Sydney — as thick smoke from nearby bushfires created a cloud that blanketed the usually picturesque harbor city — Kaufman opened up.

The struggles have been real.

“You’d like to think you [could] just wake up tomorrow and shoot a 62, even though the reality and expectations, sometimes, can be higher when you get out here and you can fall back into old habits. That’s the thing with tournament golf. For me, playing out of these bad habits I’ve gotten into from the last couple of years, I’ve basically lost confidence in the golf game. I think people don’t always understand how hard the game can be if you don’t know exactly know what your ball is going to do. It’s just a guessing game when it comes down to it. Just the buildup and the pressure has made Thursdays feel like Sundays to me. It’s hard. It’s hard for me to just go out there and be comfortable and ready to go.”

The fans in Australia wouldn’t sense Kaufman’s woes unless they Googled his results. His demeanor has been that good. Ask his pro-am partners.

“He was absolutely fantastic,” Peter Mitchell, chairman of Golf New South Wales, said after his round with Kaufman. “He made our experience enjoyable.”

Maybe Kaufman will find some self-assurance among the supportive Aussie crowds. In the first round of the Open, the fans seemed ready to hoist the American upon their shoulders. The cheers for Kaufman were just as loud as they were for the likes of Paul Casey, Sergio Garcia, Adam Scott and Louis Oosthuizen.

“The fans here were great today,” Kaufman said. “That was fun. There were some marquee groups behind us, so we played with some big crowds. That was a nice change for me, from home, where I haven’t really been playing in front of anybody much lately.”

Golf is hard, even when you’re really good at it. Clawing your way out of a slump is even harder, and there’s only one way out: playing and practicing, practicing and playing. That’s why Kaufman will push on from the Australian Open and board a 7.5-hour flight to the Indonesian Masters, an Asian Tour event at Royal Jakarta GC. He’ll then come back to Australia to finish the year at the Australian PGA Championship, a European Tour co-sanctioned event on the Gold Coast.

“I’m happy to be here,” Kaufman said of his Australian Open appearance. “You’d love to come down here and put on a good show and win the tournament. The kid in me, and the competitor in me, expects to do that.

Kaufman may have lost his form, but he hasn’t lost his positivity. He’s Down Under, trying to get back on top.

“I think you have to [stay positive],” he said. “I have always believed your talent doesn’t go anywhere.”