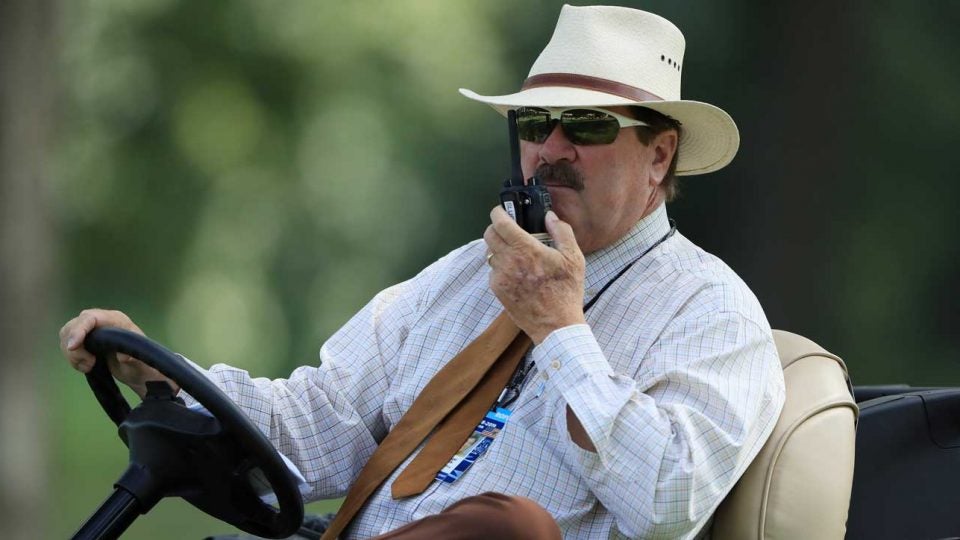 Golf is slow. Professional golf is slow. The degree to which that slowness is an inevitable feature of the game versus being “too slow,” “crisis slow” or “embarrassing slow” is a matter of opinion. But there’s no doubt that the chorus of professional golfers calling for speeding up play has never been louder.

Brooks Koepka has never minced words on the topic. Rory McIlroy has added his thoughts, too. And a video of Bryson DeChambeau taking more than two minutes to hit a 10-foot putt at the Northern Trust went viral, sparking a confrontation with Koepka and inspiring several more players to speak out against the plague of slow play.

With that in mind, co-host Sean Zak and I had iconic PGA Tour rules official Slugger White on this week’s Drop Zone podcast to discuss what he and the Tour think of slow play. While he’s keenly aware that people are discussing it, White made it clear that it’s a constant focus of his team, but that he doesn’t think there’s a ton that can be done to speed things up.

Rules
What happens if you shank it off 17 at Sawgrass and land on the other island?

A portion of the interview with White is transcribed below; I’d encourage you to listen to the whole interview here for Slugger’s perspective on the intricacies of the rules, the Tour’s most knowledgeable players, backstopping, giving rulings to angry players and much more.

DROP ZONE: Do you guys see that as a big issue and what are some of the steps that you guys take to make sure you keep play moving?

SLUGGER WHITE: I don’t see a big problem in the last 40 years, 42 or 43 years I’ve been around the Tour. We just need to kind of recognize the guys that maybe do have a little extra time that they don’t need. We just need to adjust that and try to help them out.

You’re playing for a lot of money. With Joaquin Niemann, he won a million-three last week. Sometimes it takes a little time to hit a pressure shot. And I think part of the problem is the greens are so quick now. When I started, shoot, the greens were running 9.5, 10 we’re looking at 11.5, 12 now, and guys don’t finish hardly at all. They putt, and they go and they go and they mark the ball from a foot, where it used to be you could kind of step across the line to tap ‘em in. But you don’t see that much any more.

Last week we had 156 players and you’ve got 26 groups on 18 holes and, y’know, some guys are going to wait. We’re just trying to keep play going. We don’t want to see a hole open; if there’s a par-5 open, we’ll go ahead and we’ll warn a group. 99 times out of 100 they’ll catch up and get back in the flow, we’re just trying to keep everything going and that’s all it is.

DZ: And are there any changes that you guys would like to see to the way these things are enforced? Do you like the idea of more penalty strokes, or a shot clock, or anything like that? Or do you generally see it as, “We’re in the right ballpark”?

White: I think we’re in the right ballpark. I’m not a big penalty shot person but I think we do a great job. It’s all we talk about all day long, where’s this group, where’s that group, has anybody talked to this group. We’re constantly talking about that, in fact it’s all we talk about on the radio. And I think we’re in a good place, I really, really do. I think the Tour has done a good job, we’ll come up with something that makes sense, that’s going to be a big thing on the PAC meeting coming up, and we’ll go from there with it, see what comes out.

The complete Drop Zone interview is below. Oh, and we’d love for you to listen and subscribe to the Drop Zone wherever you consume your podcasts: