The Open 2019: Should David Duval have declined his invitation to Royal Portrush?

PORTRUSH, Northern Ireland — David Duval, the 47-year-old former Open champion, shot rounds of 91-78 to finish 26 shots shy of the cut line (+1). He finished in last place by a mile. The next worst-scoring player beat him by 13 shots.

Open champions earn the right to an exemption until age 60, but given the state of his competitive game, should Duval have declined his invitation? Our resident staffers Jessica Marksbury, Alan Shipnuck, Michael Bamberger, Luke Kerr-Dineen and Dylan Dethier debate.

Jessica Marksbury: “Earn” is the key word here. Winning a major championship is a big deal. One of the biggest perks of said win is the opportunity to return as an exempt player for years afterward. We all know how golf can be: one day you’re feeling it, the next day, it’s as though you’ve never played before. (Exhibit A: Rory McIlroy’s first and second rounds.) I want to give Duval the benefit of the doubt that he believed he could compete when he arrived this week. The fact that he performed so poorly? That’s just golf.

Alan Shipnuck: Nah, that’s lack of preparation. Duval has played only four Tour events in the last year, and none in the three months leading up to the Open. This was basically holiday golf for him and it’s unbecoming of this great championship. The past winners add something to this event: Lehman’s stroll up 18 on Friday was quite lovely. But he keeps his game razor-sharp playing a full schedule on the Senior Tour. So does Calcavecchia.

Marksbury: I hear you, Alan. But haven’t we all convinced ourselves that we could string a couple of hot rounds together at the right time? I can’t imagine he would have accepted the invitation if he could foresee the scores he shot this week.

Shipnuck: Duval’s game (and body) are habitually prepared: in ‘16 he went 82-WD, and last year it was 80-WD. Unlike the Masters, which has no set field size, the Open is locked in at 156, so Duval is taking the spot of a full time pro who is dying to play. Like this year’s first alternate Martin Kaymer…who has a better resume than Duval! 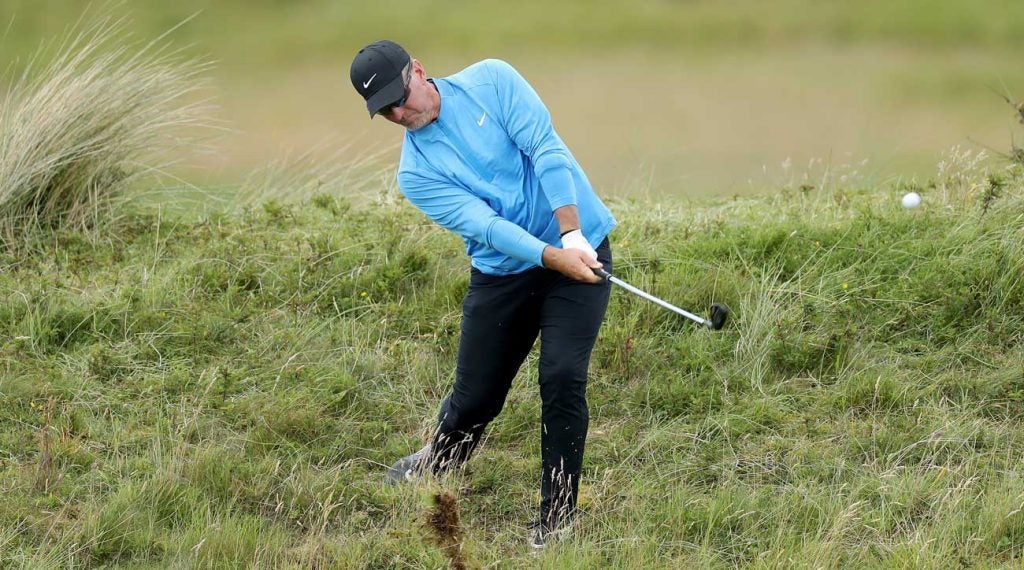 David duval hits a shot from the rough during the first round of the Open Championship at Royal Portrush.
Getty Images

Michael Bamberger: In golf, as in life, your rights extend to a border where your own liberties interfere with the rights of others. If potential playing partners really objected to playing with a player, if spectators were endangered by said player, the gent should stand aside. I don’t think Duval was anywhere near those boundaries.

Luke Kerr-Dineen: I have no problem with lifetime exemptions to the Masters because it seems so much a part of its culture. It’s a small, exclusive invitational. Augusta National is always very clear that this is their show, and they can do with it as they like. Maddening at times, but also part of its charm. The Open — and Opens in general, for that matter — feel different. They’re Opens, after all. They’re not like every other tournament. In the words of Tin Cup, they’re more “democratic,” and a basically lifetime exemption for past champions doesn’t really fit. I’d be more OK with no exemptions into Opens, but the U.S. Open probably has the right balance. A 10-year exemption, a place in history, then a good-hearted farewell.

Dylan Dethier: My main feeling on this is that the burden of responsibility shouldn’t totally fall on the player. Serious golfers are delusional; it’s a job requirement. Heck, if you told me I could play in the British Open every year until I was 60, I’d probably do it every year! With that said, Duval’s WDs, as Shipnuck points out, are bad looks and probably call for probation from playing this event. The USGA dings players for non-competitive scores in things like U.S. Open qualifying; maybe an equivalent is called for here.