Q&A: Sean Foley on what he would (and would not) do differently with Tiger Woods

Even the briefest conversations with Sean Foley are inspiring, to say nothing of enlightening. Politics, history, literature, golf, life—it’s all on the table. After an amazing year—Foley’s longtime student Justin Rose ascended to World No. 1 for the first time; Cameron Champ emerged as the most exciting young player in golf; and 2016 Masters champ Danny Willett returned to the winner’s circle under Foley’s guidance—we caught up with the man who looks at golf and coaching just a little bit differently than everyone else.

LUKE KERR-DINEEN: Justin and Tiger—two No. 1s on your coaching résumé. We’re impressed.

SEAN FOLEY: Look, I’m only as good as my guys are. Take Rosie—he’s something else, man. He’s amazing. His golf IQ is off the charts. When he gets going he gets into this beautiful Rosie place. When he’s there it almost brings tears to my eyes, because it’s just so beautiful. I’ve learned a ton from him. I’ve probably learned more from Justin than he has from me. 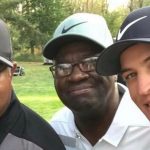 You may also like Family Man: Cameron Champ didn’t become golf’s new ‘it’ kid all by himself

SF: Like the way he practices. I think the reason that we think golf is so mental is that we practice so poorly. Let’s say you and I go out to the range right now, ahead of our round. It only takes us a few swings before we start reaching for our 7-irons. We’re probably gonna find a favorable angle where the wind will help us. It may all be done unconsciously, but we’re going to aim at one target and hit 100 balls at it. Then it’s off to the first tee, where we’ll need to hit driver with the wind off the left, then chip-draw a 9-iron to a back-left pin. But we’ve just been standing on the range working on positions. With mostly a 7-iron. No wonder most golfers walk off 18 saying, “I can’t take it from the range to the course.” Of course you can’t! You’re not practicing for it!

LKD: Danny Willett came to you injured and in the midst of a terrible slump, and he credited you for his recent comeback victory at the DP World Tour Championship Dubai. How did you guys build your way back?

SF: Danny was in this place where he was better than everyone as a junior golfer, then as an amateur golfer, then as a pro, then he wins the Masters. So he gets to the pinnacle of his career, has two sons and is trying to be a present father when he starts to struggle with his game, then gets injured. Danny may have had a couple of bad tournaments, but he never really had a bad stretch. I told him, “Okay dude, there’s no quick way out of this. I don’t know how long it’s gonna take, but you need to trust me. We’ll get there. We just gotta peel the onion back. You’ve added layers to this that are unnecessary and you’re confusing yourself. You’re still that guy. You’re still Danny Willett.” 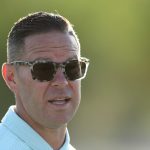 You may also like This Bruce Lee quote is the secret to being a good golf coach, according to Sean Foley

LKD: It’s interesting that you have Danny and Justin working on very different things in their swings. It kind of defies what critics say about your so-called “methods.”

SF: I feel like my critics don’t even really know what I teach. To be honest with you, my students don’t even know half the time. I remember last year when I was working with Si Woo Kim and then started with Danny—back-to-back lessons with the weakest and strongest grips you’ll ever see. Twenty years ago, one of those guys would’ve gotten destroyed. But I’m not trying to get anyone to fit a “model.” I don’t have methods. I have principles. I’m there to observe what’s going on and to build a blueprint with the player that’s unique. I was asked a while back what I’m working on with Rosie. I said, “Well, I have Andy Plummer in his backswing, Mac [O’Grady] in transition and Chuck Cook through the ball.” He found it refreshing. I was like, “Bro, I didn’t come up with any of this!”

LKD: Cameron Champ is the hottest thing in golf right now. You’ve coached him up the ranks. What do you see in his potential?

SF: To Cam, I’m a mentor and a big brother. We talk about politics, we talk about history, we talk about music, we talk about diet, we talk about hydration, we talk about what time to turn off your phone. I tell him, “Don’t ever read anything about yourself, because look—you’re on fire right now, and as soon as you’re not they’re gonna write more articles.” I’ve been through it myself. It’s special when you take young players like Cam and help them develop, but he has to keep learning. Right now, the single greatest thing that we’ll ever get accomplished in team Cameron Champ is getting him to actually eat something on a golf course.

You may also like Family Man: Cameron Champ didn’t become golf’s new ‘it’ kid all by himself

LKD: I have to ask you about Tiger. How do you look back on the madness of those years?

SF: I love Tiger, man, and I look back on that time with a lot of gratitude, but it’s such a dangerous thing to say to yourself, “If I could do it again…” I mean, if Hitler hadn’t attacked Russia, would we be speaking German today? Well, he did and we’re not. Who cares? Did some of the stuff we do put Tiger’s back under too much stress? Maybe. Was that on purpose? No, but during that same time we got Stephen Ames, Justin Rose and Danny Willett all out of serious back pain. Hindsight’s useless. I don’t really reflect. The goal is to maintain where we are, which is the present.

LKD: I guess I probably shouldn’t ask what’s next, then. But any final thoughts on the journey that has brought you to this point?

SF: I’ve met a few people who climbed Mount Everest. I asked them, “Knowing what you know now would you have done it again if you knew what it was gonna be like?” They’re like, “Are you kidding me? Of course not! I almost lost my toes, and my fingers, and almost died six times, and couldn’t breathe, and had all these insane thoughts in my head!” I’ve been teaching golf for more than half my life. It’s crazy. But if I visited my younger self and said, “Okay, Sean, here’s the deal: You’re gonna get to this point by 2019. Here’s what it all looks like,” I’d have never started. But when you’re in it—really in it— you learn to love and appreciate the struggle. I don’t learn anything on vacation. Adversity and struggle is where wisdom comes from. And wisdom’s everything. You have to go through it to get to it.