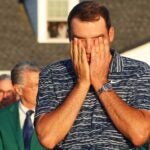 Scottie Scheffler admitted he 'cried like a baby' on the morning of his career-altering Masters win.

Scottie Scheffler shows emotions the same way he shows cracks, which is to say, he doesn’t.

The 25-year-old is golf’s biggest burgeoning superstar, but you’d never know it from watching his performance in front of the press. Scheffler is cool, calm and collected — and occasionally too cool, too calm and too collected. He rarely says much of interest!

Well, perhaps the gears of golf history were enough to shift his perspective, because shortly after his Masters victory Sunday evening, the New Jersey native was a regular empath.

In the wake of his historic, almost robotic three-stroke win, Scheffler admitted the lead-up to his Sunday afternoon tee time was anything but.

“Last night was fine,” Scheffler said. “This morning was a totally different story. I cried like a baby this morning. I was so stressed out. I didn’t know what to do. I was sitting there telling Meredith, ‘I don’t think I’m ready for this. I’m not ready, I don’t feel like I’m ready for this kind of stuff, and I just felt overwhelmed.'”

“She told me, ‘Who are you to say that you are not ready? Who am I to say that I know what’s best for my life?'” Scheffler said. “So what we talked about is that God is in control and that the Lord is leading me; and if today is my time, it’s my time. And if I shot 82 today, you know, somehow I was going to use it for His glory. Gosh, it was a long morning. It was long.”

Eventually, Scheffler was able to settle his emotions, but his nerves remained.

“I think because it’s the Masters,” he said. “You know, if you’re going to choose a golf tournament to win, this would be the tournament I would want to win. You don’t know how many chances you’re going to get. And so having a chance, you know, I think I had a five-shot lead on Friday and then a three-shot lead going into today, I don’t know if you get better opportunities than that. You don’t want to waste them.”

If Scheffler felt nervous, he hardly showed it on the course. Sunday’s 1-under 71 made him the only player in the Masters field with four consecutive rounds under-par, and also featured a double-bogey on the 72nd hole when the tournament was already within reach.

Scheffler was clinical through Amen Corner, playing the three-hole stretch in even-par before back-to-back birdies on 14 and 15. All of this despite Cam Smith’s early charge, which briefly cut the deficit to one.

Of course, Scheffler left Augusta National on Sunday with the green jacket, placing his name in the golf history books as a Masters Champion … not that that’s a big deal.

“The human condition is to make things bigger than they really are,” he said. “And years from now I would say people may not remember me as a champion, and that’s fine. But in the moment, you think it’s a lot bigger deal than it really is.”