Scott Piercy is under fire for a couple of recent Instagram posts.
Getty Images

PGA Tour pro Scott Piercy issued an apology Tuesday, less than a day after sharing homophobic and alt-right memes to his Instagram story.

“Whenever i post my intent is NEVER to offend,” he said in a follow-up Instagram story Tuesday morning. “I want to apologize if any of my recents (sic) story posts have been offensive. I will do better!” 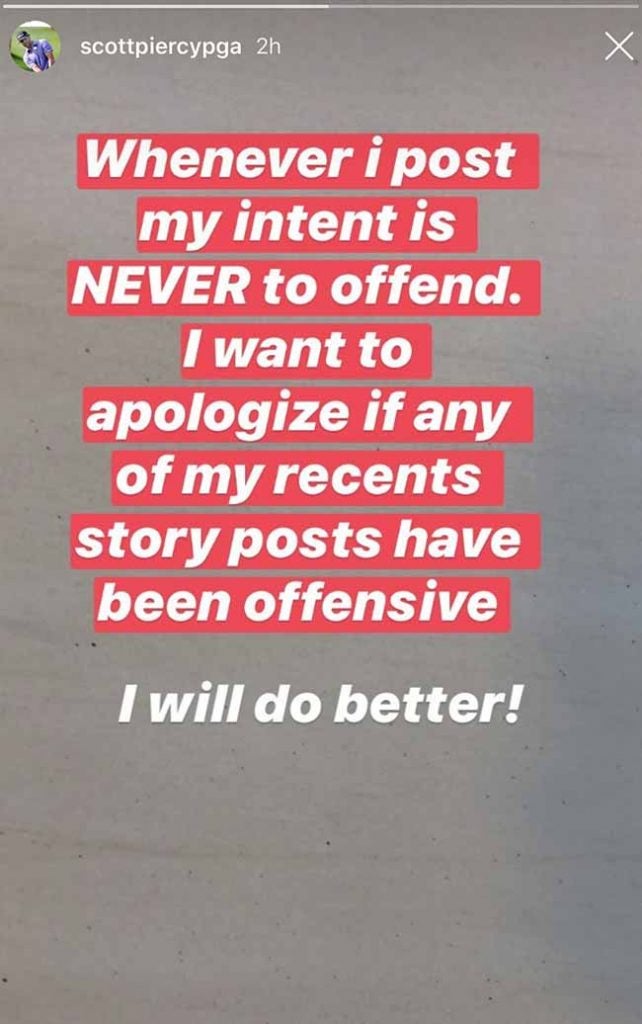 The 41-year-old has been criticized widely on social media after sharing a pair of stories to his Instagram page on Monday afternoon. Piercy’s first post made reference to “QAnon,” a far-right conspiracy theory that exists largely on the message board “8chan,” which accuses the United States government of orchestrating a massive, criminal enterprise.

Piercy’s second post was a crude, homophobic meme targeted at former Presidential hopeful Pete Buttigieg, who is openly gay.  The meme mocked Buttigieg’s sexuality in reference to his decision to suspend his Presidential campaign.

The situation does not appear to be directly enforceable under the PGA Tour’s “conduct unbecoming a professional” policy, even given its derogatory nature against Buttigieg. “We were made aware of Scott’s post and are disappointed in the lack of judgment used,” the PGA Tour said in a statement to Golf Digest.

According to the PGA Tour player handbook’s section on public and media comments, “public comments that a member knows, or should reasonably know, will harm the reputation or financial best interests of a tournament sponsor or charity are expressly covered by this section. Any violation of this section shall be considered conduct unbecoming a professional.”

Piercy is in his 11th season on the PGA Tour and has won four times, most recently at the Zurich Classic in 2018.