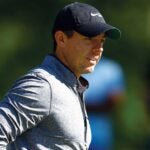 Rory McIlroy walks during a pro-am round at the RBC Canadian Open on Wednesday.

Rory McIlroy didn’t have to wait long for the question he knew he was going to be asked. Speaking to the media prior to the RBC Canadian Open on Wednesday in Toronto, McIlroy reiterated his stance on the LIV Golf Invitational Series, saying he has no plans to participate in the breakaway league and that chasing money ultimately doesn’t always turn out to be the right decision.

The RBC Canadian Open, being played for the first time since 2019, when McIlroy won, shares a spot on this week’s pro golf schedule with the first Saudi Arabia-funded, Greg Norman-led LIV event that starts on Thursday in London, a tournament that’s headlined by Dustin Johnson and Phil Mickelson.

The events of the past week have been impossible to ignore. Johnson is the top-ranked player in the LIV field, and he otherwise would have been at the RBC Canadian Open, an event he’s played in seven times and won once. (RBC ended its relationship with both him and Graeme McDowell after they announced they were joining LIV Golf.)

Compounding matters for the PGA Tour, a report surfaced in the last 24 hours that Patrick Reed and Bryson DeChambeau will also soon join LIV. (DeChambeau’s agent confirmed the news.)

“I think my stance on it has been pretty clear from the start,” McIlroy said. “It’s not something that I want to participate in. I certainly understand the guys that have went. I understand what their goals and their ambitions are in their life. I’m not, certainly not knocking anyone for going. It’s their life, it’s their decision, they can live it the way they want to.

“But for me I want to play on the PGA Tour against the best players in the world. And I think for me, speaking to a few people yesterday and one of the comments was, anything, any decision that you make in your life that’s purely for money usually doesn’t end up going the right way. Obviously money is a deciding factor in a lot of things in this world, but if it’s purely for money it’s not, never seems to, you know, it never seems to go the way you want it to. And I’ve had that before a couple of times in my life and there’s other things that are a part of it too. But it’s a weird time in professional golf.”

McIlroy, who called the new league “dead in the water” just four months ago, said on Wednesday the golf world will just have to see how everything plays out. There’s still uncertainty regarding if LIV defectors can participate in majors (the USGA said it would allow them in the U.S. Open, but no other major organization has said definitively one way or the other) and if the PGA Tour will and can ban players. And, if so, for how long.

“It’s a shame that it’s going to fracture the game,” McIlroy said. “I think if anything we need to make this — the professional game is the window shop into golf. If the general public are confused about who is playing where and what tournament’s on this week and who is, you know, oh, he plays there, okay, and he doesn’t get into these events. It just becomes so confusing.

“I think everything needs to try to become more cohesive, and I think it was on a pretty good trajectory until this happened.”