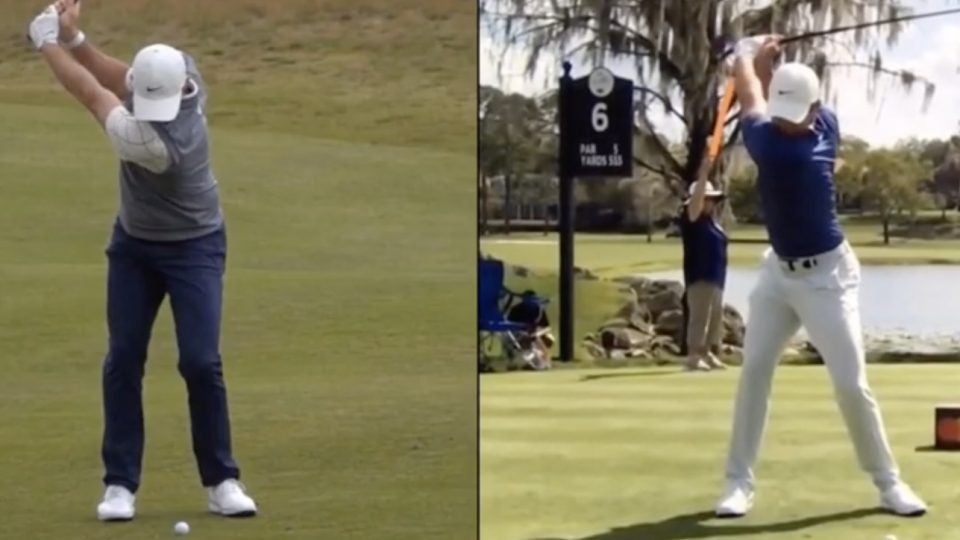 Rory McIlroy. The swagger and the swing. If there’s anyone who has been able to rival Tiger’s star power over the past 20 years, the man who has come the closest is the golfer from Holywood, Northern Ireland.

Rory might well be the greatest driver of a golf ball we have ever seen. The immense power he generates usually comes at the expense of accuracy, but not in Rory’s case. He is the ultimate driving machine. He is captivating, and inevitably, when a player of this charisma and style is at the top of the game, imitators emerge. Coaches and students across the world try to emulate what he does and how he does it. We’ve done this forever, whether it be Jack’s left knee, Arnold’s bowed left wrist, Bubba’s footwork, or Tiger’s…well…everything.

In the case of Rory, golfers across the planet what his big turn, fast hips and wide extension. But golfers need to be careful when applying Rory’s skills to their own game because Rory actually has two totally different swings that he uses at different times. If you don’t know the difference you can find yourself in a lot of trouble.

Rory’s driver and iron swings are almost diametrically opposed. I think this is part of the genius of Rory. He optimizes his swing for each club. With modern drivers we need to create optimal launch conditions to achieve the best results, but he knows his irons require something different.

How does he swing his driver? It is all dictated by how he wants the club to move through impact. He wants to hit up on the ball to increase launch angle and reduce spin. It’s why hits up on his driver by nearly five degrees at times.

Rory also loves to start the ball right and hit a draw. Consequently he starts with his mass and pressure more on his right side and allows his body to shift slightly further away from the target. He has a huge turn in both his upper body and lower body as he prepares for the down. He then has a transition forward with hips as he rapidly rotates them. In this process he uses lots of leg action but most importantly keeps his top half behind the ball and uses his hands to release the club. Remember he wants to start the ball right and hit up on the ball. This action is built from the ground up and is effectively leg driven. 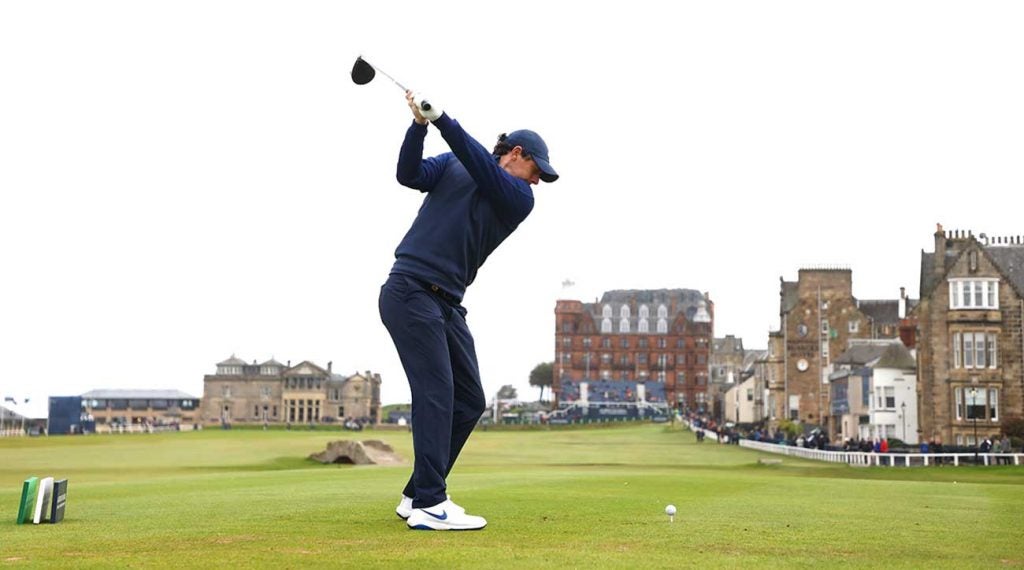 Rory McIlroy tees off during the final round of the Alfred Dunhill Links Championship on Sunday in St. Andrews, Scotland.
Getty Images

How does he hit his irons? It’s almost the opposite.

Rory starts with his pressure and mass more in the middle. He then resists the temptation to move his body laterally away from the target staying “on top of the ball”. He has a more resisted turn and his transition is much much quieter in his lower half and he moves his sternum towards the target as his arms drop. He is not trying to stay behind the ball at all. He wants to cover the ball with his top half at impact. This means he needs much less leg action and uses his top half so much more than the driver. Through impact he is moving his shoulders around towards the target and doesn’t use his hands to release the club at all. It’s a shoulder release. So where his driver swing is leg driven, his iron swing is top half driven.

The 2 very different swings of @rorymcilroy. In my latest @golf_com article I go into the differences between his driver and iron swings. Often golfers obsess over his driving motion not realising he swings completely differently with iron. Stay tuned

Where most golfers get into trouble is when they try to apply Rory’s driver swing to their irons. This is only natural as it’s what gets replayed over and over again. Replaying his 7-iron just isn’t as sexy. Rory’s Driver swing is designed to hit up on the ball by five degrees and hit 15 yard draws. This means that the low point of the swing is around four inches behind the ball. Guess what happens when you try that with your 6-iron? Fats and blades. It makes it impossible to clip your irons off tight lies and your pitching will be a nightmare.

The question that you must ask yourself is are you a good enough golfer or one who practices often enough to have two totally different golf swings? My guess is probably not. Most students I know have trouble imbedding even one repeatable motion. Next week I will go deeply into which one of Rory’s swing will probably work for you and how you can integrate it. So stay tuned.

To learn more about Skillest and to book a lesson of your own with Baden, head over to Skillest.com or download the app in the App Store.