Rory McIlroy is a betting favorite for the British Open at Royal Portrush, and for good reason.

The 30-year-old is one of the few players in the field who grew up in Northern Ireland and knows the course well. He’s also already won an Open Championship in his career, so he’s obviously quite familiar with links golf and the shots and strategy it commands. Oh, and one more. There’s also the fact that he shot a course-record 61 on the Dunluce links at Royal Portrush — when he was just 16 years old.

However much stock you choose to put into something that happened 14 years ago is up for debate. But McIlroy recently sat down with The R&A to discuss that epic round, which happened in a qualifying round for the North of Ireland Championship on July 12, 2005.

“Honestly there’s not many golf rounds where I’ll remember every shot,” McIlroy said, “but that day I do.”

McIlroy, who the club allowed to be a member at age 8 instead of waiting until 12, missed a birdie putt on his first hole but missed little after. He two-putted for birdie on the 2nd and added birdies on 6 and 9 to turn in 33.

He eagled the 10th and, after a long wait on the 11th tee, made birdie there to go to six under.

“At that point I realized I was doing something pretty special,” he said. 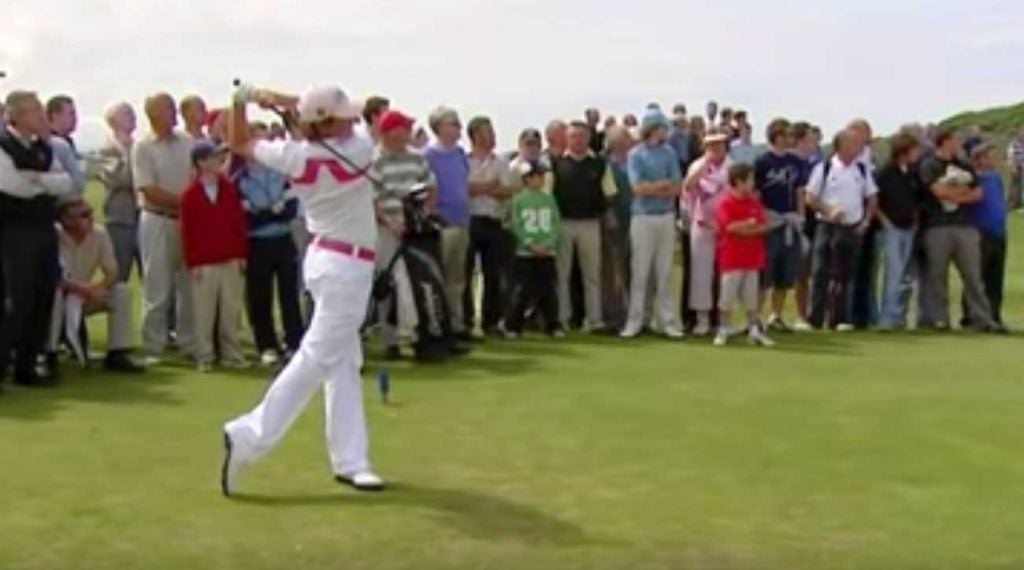 Rory McIlroy tees off during his epic 11-under 61 round at Royal Portrush in 2005.
YouTube

McIlroy knew the course record was an eight-under 64. After pars on 12 and 13 he birdied the next two to get to eight under with three to play. Three pars would tie the record, but after a birdie on 16 he came to the easy par-5 17th and made another. Then, on 18, he hit a good drive and found the middle of the green with an eight-iron. His goal was to two-putt from 20 feet, but he sank it for birdie instead to shoot 28 on the back nine. His round closed with five straight birdies for an 11-under 61. It was his first-ever bogeyless round.

“A member of the golf club phoned me and told me, and I thought it was a joke,” said Michael Bannon, McIlroy’s long-time swing coach. “No one can shoot 61 around Royal Portrush.”

Donal Casey, who now works as the CEO of Rory McIlroy Inc., was also playing in that 2005 event.

“It was almost an earth-shattering score for a 16-year-old to shoot,” he said. “You just would have never have seen 61 out there.”

Darren Clarke was among those two texted McIlroy to congratulate him afterward. Stephen Crowe, McIlroy’s playing partner that day, was in awe. McIlroy had long been a rising star in the area, but a 61 is a 61. And at Royal Portrush, to boot.

“I always thought if he doesn’t make it, nobody’s gonna make it,” Crowe said. “You always knew where he was on the golf course. He always had a crowd.”

Since McIlroy’s 61 the Dunluce links has underwent changes. The 17th and 18th holes were flattened. The exact course McIlroy thrived on that July day is no more.

“That 61 he shot is not the official record anymore because they changed the golf course,” said David Feherty, who is also from Northern Ireland, “but as far as the members and the general population is concerned, he’s the guy that shot the lowest round there.”