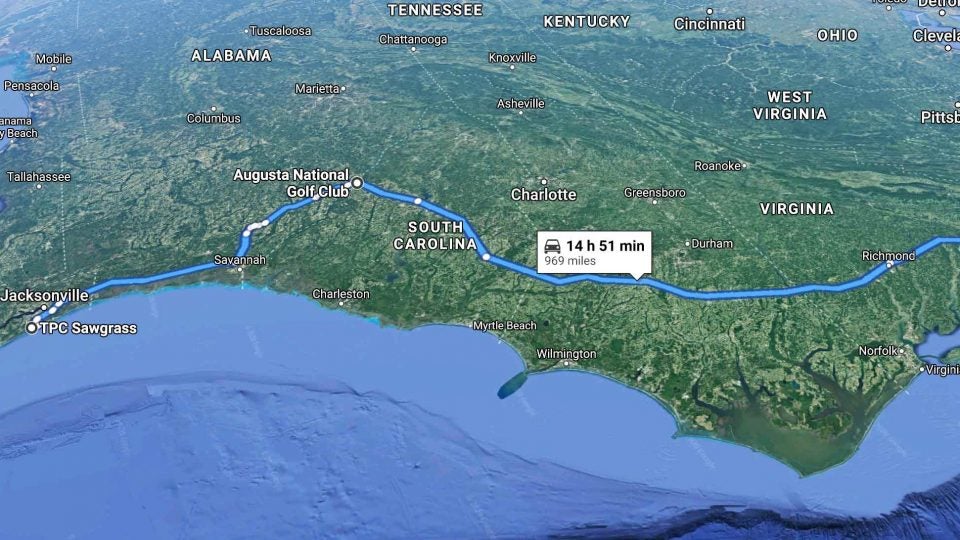 The drive from Jacksonville to Philadelphia by way of Augusta.
google maps

We golfers are especially qualified to get through this virus thing. I’m talking to you and I’m talking to myself. Also to Annika, to Tiger, to Conrad Shindler (check him out). To your mother-in-law, your boss, your delivery person. (Thank you, delivery person!) Golf, played earnestly at any level, requires large measures of realism, optimism and patience. So does this us-against-it tangle we’re in.

Golfers will know this on instinct alone: We play the shot experience tells us we can play, then plead like crazy with that ball in the air. As if it can hear us. Battling this virus will require both large doses of realism (wash your hands, keep your distance; wash your hands, keep your distance) coupled with we’ll-get-through-this optimism, which of course we will. Emphasis on we.

Golf has more we in it than you might realize, even beyond the caddie-player thing. Partnerships are obvious in Solheim Cup play, in after-work leagues, in Saturday better-ball games. But they exist even amid the intensity of player-against-the-field tournament golf. On Thursdays and Fridays on the PGA Tour and almost every other tour, the high priests go off in threesomes. The other two, in the vernacular, are your playing partners. Yes, they’re trying to beat you. But they’ll also help you find your ball in the hay, weigh in on weird rules situations, tell amusing stories while waiting on backed-up par-3s. And so it is with this virus. Team Earth will bring it down. Each of us has a job to do, an individual route to run. But its defeat will come through teamwork. Go team.

News
As we grapple with a crisis, golf matters now more than ever

This has been a March unlike any other March, for all of us. (Drop the capital to keep the theme alive: march.) For decades now, the month of March, for your correspondent, has meant the Florida Swing. Covering tournaments. Gathering string for Masters preview stories. Getting reacquainted with this person and that one. Sneaking in some golf where I can.

I got a late start this year. I packed for Florida on Friday, March 6. (It doesn’t take me long. Shorts, yard-sale golf balls out of the garage.) That same day, the White House announced that President Trump would be giving Annika Sorenstam and “Gary J. Player” the Presidential Medal of Freedom, the nation’s highest civilian honor. Business as usual. No, not in China, not in Italy. But here, yes. The scheduled date for the ceremony, March 23, has come and gone. Annika and Gary J. Player will surely get their day in due course.

Briefly: On Monday, March 9, the day after Tyrell Hatton won at Bay Hill, I played the North Palm Beach muni with my friend Rees Jones, the course architect. A gent if ever there was one. We played in a howl and I lost only one ball, a draw shot in a hook wind that trickled into a pond. Is the death of a golf ball more frustrating off a good shot or a lousy one? Someday such quaint debates will be meaningful again.

Two days later, I was sitting at the grownups’ table, between Mike Davis and Annika Sorenstam, in a large conference room at the PGA Tour’s headquarters. Jay Monahan was at one end of the table. A World Golf Hall of Fame official, Brodie Waters, was at the other. The distinctive voices of Curtis Strange and Nick Price were coming from on high, through a ceiling speaker. It was a meeting of a 20-person committee charged with electing the next Hall of Fame class. (There was a handful of us from the typing pool, including Doug Ferguson of the AP and Beth Ann Nichols of Golfweek.) Four new Hall members, from 10 candidates, were elected. Only one so far has been announced: Tiger Woods.

Annika, as prepared as you would expect her to be, made a spirited argument for Candidate X. (I’m not at liberty to say.) The meeting began at 10 a.m. and lasted two and half hours. I skipped breakfast at the hotel — and few people are more devoted to the Marriott breakfast buffet than I — knowing that the Tour does food spreads as well as any make-believe catering company on Billions. But there was no food spread on that Wednesday morning. (I found an apple in the commissary.) There was Purell. At the end, I shook hands with Annika, read her face, got her the jug. She pumped. We have all had had our moment when we got religion. That was mine.

On Thursday they played. (Hideki — 63!) On Friday they did not. On Saturday I made a lonesome walk across the course. (I will never dis you again, TPC Sawgrass!) On Sunday I started a leisurely drive to Philadelphia, where I live. 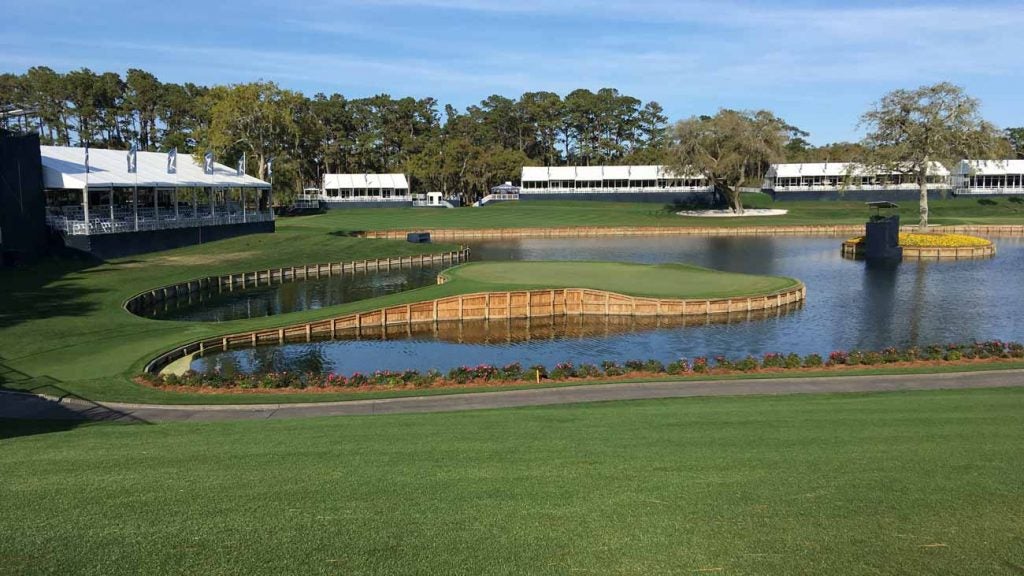 TPC Sawgrass on the Saturday of what should have been the third round of the Players.
Michael Bamberger

I made a pitstop in Augusta and stayed at the downtown Marriott, as I have many times before. Augusta is Georgia’s second biggest city and that downtown Marriott is, normally, a busy convention hotel. On this Monday night, its occupancy rate was about 10 percent. It was a ghost town. For breakfast I ate cold cereal in my room with milk from an empty lounge.

The hotel is owned by William S. Morris III, an Augusta National member who inherited The Augusta Chronicle from his father. The club’s members are asked to work the tournament. For years, Morris’s job was to shuttle players from the 18th green to the press building. He did so wearing his green member’s sport coat and a wide-brimmed straw hat that was never in jeopardy of flying off. Nobody would accuse Billy Morris of reckless driving. I’ve seen Nicklaus riding shotgun with him, Greg Norman, Tiger. It’s funny, how your mind floods when you cross into Richmond County, when you wake up in Augusta, when you head out of town via Washington Road.

I stopped at the club’s entrance. On the front seat of my Hertz rental was a very modest gift for a club employee who has been exceedingly generous with her time and expertise on various stories and books over the years. I know the routine there, the bollards at the head of driveway, the sturdy security hut as you enter on the right. I had no fantasy, or even desire, to drive down Magnolia Lane to the clubhouse. I’ve done that enough for a lifetime. Just making a drop-off.

Augusta National does things right, with planning and forethought, with attention to detail. Everybody knows that. Casual is not in its DNA. A security officer emerged from the gatehouse. He looked like a state trooper you may have met in different circumstances, tall and fit, in a pressed uniform, hatted. He could not have been more polite. I’ll make sure this gets there.

I was surprised by what I could see from the foot of the driveway: a large swath of manicured grass with yellow flagsticks planted here and there. The deep end of the members’ driving range. There used to be a tall net, to keep John Daly’s drives on club property. The color of the grass, the tightness of its turf: The Augusta National Golf Club. It’s sui generis.

I continued my drive home, in no rush. The shelves of the roadside service stations were packed with red gummy bears and brown beef jerky sticks and loaves of bread. The miracle of the American economy. Hug a trucker. Read up on the Federal Aid Highway Act of 1956. Ike! How would you like to leave this earth with a tree and an interstate system named for you?

Now driving, to borrow Augusta National’s first-tee phrase: The long stretches where you see nothing but towering hardwoods and tall pines growing out of swamps, their northern reaches hinting at spring on this mid-March day but not more.

The word was already out, that Augusta National was doing some preliminary planning for an October tournament. To repeat, Augusta National doesn’t do casual. If the club, like a university, had a motto, it could be Con Uno Scopo. With purpose.

I came home to find my 2020 tournament parking permit, a hangtag with a barcode, so sturdy you could serve cookies on it. No dates on it, just the year. My tag number is 0076, black numbers in a white box. None of this is by accident. Below the number is the familiar club logo, the outline of the Lower 48, filled in yellow, with a tall green skinny flagstick marking Georgia, a red flag waving to us from its top.