Riding the Tiger High: When Woods is rolling, watching him is like a drug. It’s impossible to get enough 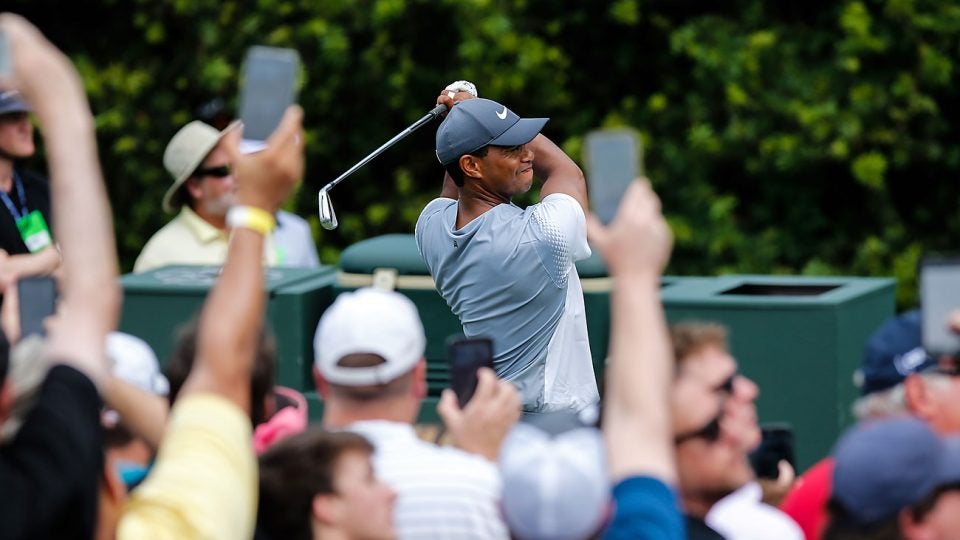 Cameras up: Woods electrified Sawgrass, and fans around the world, with a career-best 65 on Saturday.

PONTE VEDRA BEACH, Fla. — Tiger’s like a drug. When the Tiger High is over, what can replace it? Nothing.

Woods holed out on 18 on Saturday almost two hours before the final twosome pushed in their pegs. His final moment was a half-footer a toddler could have handled for 65. And with that the holding pattern began. The day was over. Sorry, Johnny. I know you like Webb, and not just because he won an Open at your beloved Olympic. You did the best you could, but the man’s lead is seven over Danny Lee.

Yes, true: It wasn’t over over at 1 p.m. It of course was not over for Webb Simpson — he’s trying to win his first tournament since 2013. Or Harold Varner III, looking to cash the biggest check of his career. (His T-7 finish at the 2016 Quicken Loans earned him $231,000.) Or Dustin Johnson, looking to retain his position at the top of the World Golf Ranking, where he’s been for 64 weeks.

Every player on this PGA Tour, along with the 7.6 billion other people in this world, has a story and there’s not enough ink to tell them all. But golf has one best story. It is Tiger Woods, trying to recapture lost magic. He won’t. But we watch because we are hopeful beings. It’s in our nature.

You may also like A new old feeling: Tiger Woods surges with third-round 65 at Players Championship
Do not ask the 42-year-old for command performances. Please. He can’t, as we saw at Augusta. Woods did nothing there to make you sit up and take notice. At Quail Hollow, he did less. For about 11 years, beginning in 1997, he was a golfing machine. He had the goods. Now he doesn’t, not like he did. Here’s Saturday morning, knocking on your door and his. Surprise! A front-nine 30.

A mere two hours later, Woods handed his putter to Joe LaCava for the final time, made a few appropriate remarks to Steve Sands and split the scene. His wait began, as did ours. The waits vary. A day, a week, a year, a half-decade, a decade. Everyone knows he hasn’t won since 2013 and hasn’t won a major since 2008. The waiting is the hardest part. Here’s a short one. Makes you think of those emergency rooms that announce their wait times in digital format right on a roadside billboard. Average wait for next meaningful Tiger Woods tee time–

This whole comeback thing Woods is on, it’s not about winning, even though that’s what everybody seems to want to talk about. Well, we’ve been conditioned all our life to think in terms of winning and losing. That old and awful Nike spot featuring Woods — winning takes care of everything — didn’t help matters any. His first 12 holes —eight birdies, four pars — took your breath away not because they could lead to victory but because Woods, and not anybody else, was doing what he used to do. Typically, in sports and in life, what is gone is gone.

He’s not winning this week. Maybe he will at Jack Nicklaus’s tournament in Ohio in a couple of weeks. Or at the U.S. Open at Shinnecock Hills. Maybe he’ll never win again. It really doesn’t matter. What matters is, the man is trying. Isn’t that the starting point for every worthwhile thing? You try. To the best of your abilities, you try.

Tiger is a shadow of his former self, really. At 42, with a body reconstructed on surgical tables and in gyms, with a psychic life incomparably more complicated than we could know, it would have to be. But he’s doing what we want to do ourselves, what we want our kids and our parents to do. He’s trying. This guy is trying. It’s not easy for him anymore. For a long time it was but now it’s not. That’s why we can’t stop watching.

(Meanwhile, Simpson had played those same 36 holes in 129 strokes.) Tiger’s fourth-round Mother’s Day tee time is 2:05 p.m. — with Jordan Spieth. How good is that? Jordan is all about we-we-we. Tiger’s not, and that’s not a dig. He’s the one who plays the shots. Anyway, we know it’s a team effort.

There are Tiger’s doctors. There’s his former wife, and surely a nanny. There’s an equipment guy at TaylorMade and equipment guys around that equipment guy. There’s the physio in the Tour truck. There was of course Earl and there is still his mother, Tida.

“My mom was the tough one,” Woods said the other day. “She’s a very tough lady. When you talk about discipline, the Asian culture is a little bit different and that’s what I was raised on. My mom was tough but extremely loving and so supportive. I probably wouldn’t have got this far without her because she’s the one who took me to all the golf tournaments. She would drive an hour just so I could play nine holes in a peewee league. And so she made a lot of sacrifices for me to get here. And I can’t thank her enough for it.”

Spieth is the best thing in this game right now. Plays his bottom off every time out, plays with heart and gratitude, talks beautifully and candidly about his internal life, keeps it all in perspective. Johnson is the game’s most exciting player — the power and the finesse, plus he’s awash in all that I-don’t-give-a-damn.

Phil is Phil. A particular personality, engaging, thoroughly entertaining. Plus, he’s a golfing magician, still — at 47 fixing to turn 48. Rory’s cool. Justin Thomas — a savant and a good kid. I could watch Tommy Fleetwood all day long. But Tiger is absolutely completely sui generis, which is a fancy way of saying there ain’t nothing like him.

You found your way to him Saturday morning, didn’t you? If you care about this game, about second chances, about pushing the outer limits of human potential, you surely did. How does not matter. By phone, by iPad, by laptop. Your TV, your car radio. Your Twitter feed. If you care about the prospect of improvement, advances in medical science and a hundred other things, you were watching.

As he played the par-3 17th Friday, I was nervous. He didn’t play the Par-3 Tournament at the Masters this year, I’m guessing because he knew more bad could come from it than good. He rinsed a shot at a course opening last year. He’s been talking this year about the chalets behind the tee at 17 and how they block out the wind. Hit it high and the wind will grab it. Hit it low and it won’t. Distance as a function of altitude. This game is hard enough and if you think too much it gets impossible. You wanted to see him finish. He did. Two pars to end the day. Ends are tough. One good round doesn’t mean much. He knows that.

Tiger is golf’s most private person and the game’s most public commodity. The 2000 U.S. Open at Pebble Beach, which he won by 15, was one of the most intense sporting experiences ever, but also supremely boring. He wasn’t going to make a mistake. Now we know all about Tiger’s mistakes. He’s more human now to us than he’s ever been. On Sunday, he could shoot 64 or 74. Either way, we’ll be watching. Because this whole thing, it’s one big unknown. In it’s own strange way, it’s thrilling. Uncharted. He knows that and so do we. Surprise.